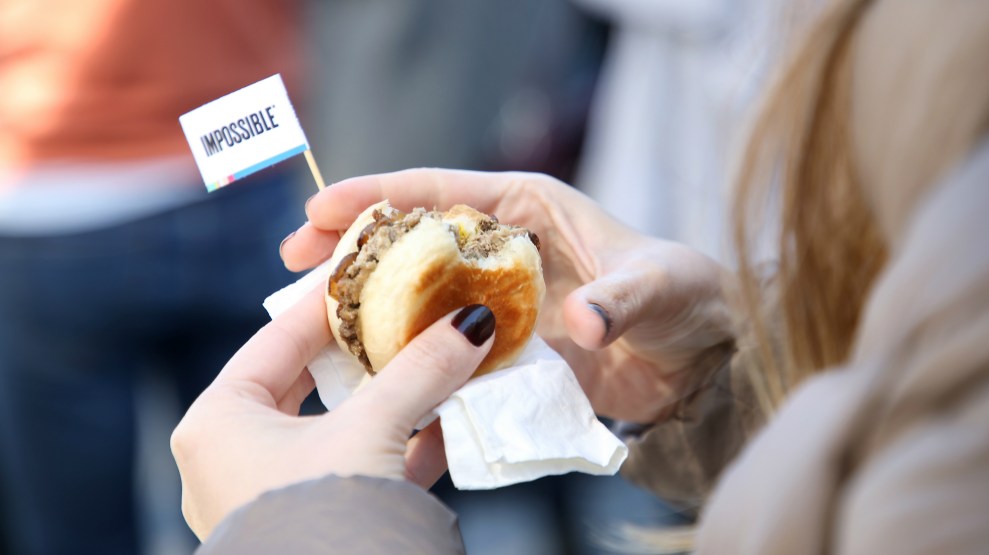 In one of those interchangeable American office parks, where oceans of blacktop pool around lowrise grey-on-grey buildings, a gaggle of kids in white lab coats gathered to apply temporary burger tattoos, conduct mini science experiments, and await the arrival of a radically transformed food system.

The backs of those lab coats were decorated with the initials IF standing for “Impossible Foods,” the eight-year-old startup working to replace all animal meat with its plant-based alternatives.

The kids went from table to table under big white tents in the parking lot behind company headquarters. There was a station where they could try and guess the flavor of jelly beans while wearing nose plugs (it’s almost impossible), and another where they could make little wind turbines out of paper. The vibe was more grade-school science fair than Silicon Valley bacchanal, despite the fact that the company is flush with cash.

Investors are clawing and shoving for the opportunity to throw money at young alternative-meat companies. Impossible just raised $300 million in its fifth time going back to the money well. Another veggie-burger maker, Beyond Meat, saw its stock price increase more than 600 percent since it first went on sale in May. Del Taco, Carl’s Jr., and T.G.I. Friday’s are selling Beyond Meat products, while White Castle, Burger King, and Qdoba are offering Impossible burgers—and the company can’t make enough to keep up with demand. Things seem a little frothy: Is this a faux-meat bubble?

Impossible Foods’ kid-centric event was perfectly crafted to quash fears that America’s enthusiasm for its burgers is just a flash in the pan. The company organized the party to herald a set of survey findings showing that young people are more likely than past generations to seek out meat alternatives. The report attempts to dispel any bubble fears in the very first line: “Plant-based meat is the hottest trend of 2019—but it isn’t a passing fad.”

The company’s founder and CEO, Pat Brown, got on the stage to field questions from the kids—mostly children of employees. Half a dozen stumpy arms reached high. A boy who endearingly pronounced his Rs as Ws asked, “Does the Impossible Burger have the same protein as a regular burger?”

“What a great question. Are you a nutritionist or a doctor?” Brown asked, before answering, basically, yes, and iron too.

A girl with horn-rimmed and pink glasses and punctilious diction asked, “How long did it take you to perfect the formula?”

One advantage over animal meat, Brown pointed out, is that the recipe is never perfected—they keep improving it every day.

Brown asked for a show of hands. “Who loves to eat hot dogs? Fish sticks? Hamburgers?”

All the kids’ hands were up by the end of that list, but he went on: “Who here is really glad that they came from dead animals?”

The hands went down and an uncomfortable silence descended.

“I promise that by the time you are adults the meat you eat will not come from dead animals,” Brown said. “You can come find me and beat me up if I’m wrong.”

According to Brown, 2035 is the year humans will have finished upgrading their diets from carnivory. If we even got halfway there it would be a tremendous boon for the environment because our hunger for meat drives deforestation around the world. Livestock and its feed takes up 80 percent of our agricultural land. More forests are likely to fall for the sake of meat as global poverty continues to decline and more people get the chance to cook steak and eggs.

For now, customers have to be driven by ethics or curiosity to eat these meat alternatives because Impossible Burgers are more expensive than their flesh-based counterparts. But that should change, Brown told me at the event, because plant-based burgers require less land and resources than ground chuck. Impossible Burgers should be cheaper as soon as the company is big enough to capture the efficiencies of mass production, he said.

And when will that be?

“With the caveat that this depends on scaling and other variables, probably three years with a high degree of certainty,” Brown said.

That would put Impossible Foods somewhere around its 11th birthday—on the brink of puberty. It’s nearly impossible to gauge a kid’s potential from their youthful accomplishments, and there’s already signs of potential trouble: The beef industry, alternative-medicine hucksters, and some environmental groups have started attacking meat alternatives as dangerously high-tech foods. But if Brown is able to brush by those objections and hit his three-year target, he might have to drop the first two letters from the name of his company.