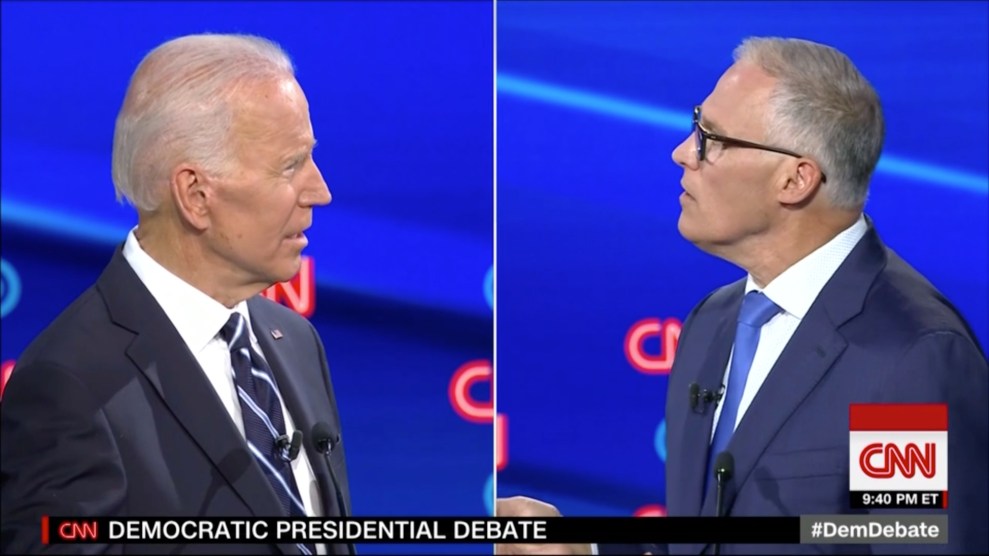 Two-thirds of Americans know climate change is underway and that humans are to blame. And yet, according to a March Gallup poll less than half—45 percent—think it will pose a serious threat in their lives. That means there’s a gap between understanding the problem and understanding the urgency of that problem.

Washington Governor Jay Inslee has been the only 2020 Democratic candidate to center his entire campaign on the urgency of global warming. During the second hour of the second Democratic presidential debate on Wednesday night, when CNN moderators turned their attention to climate change, it initially appeared that it would end up being the predictable recitation by all the candidates that climate change is an existential crisis and a repetition of their call to rejoin the Paris climate agreement. Then something unusual happened. Jay Inslee went after Joe Biden directly for not being ambitious enough in his proposals to address the problem, and soon other candidates followed suit.

“Look these deadlines are set by science,” Inslee said, turning to Biden. “Mr Vice President, your argument is not with me, it’s with science. And unfortunately your plan is just too late. The science says we have to get off coal in 10 years. Your plan does not do that. We have to get off of fossil fuels from our electric grid in 15. Your plan simply does not do that. I’ve heard you say we need a realistic plan,” Inslee continued, “Survival is realistic and that’s the kind of plan I have”

"Middle-ground solutions, like the Vice President has proposed … are not going to save us." Gov. Jay Inslee explains why fighting the climate crisis is his top priority. #DemDebate https://t.co/FNcIRdHoQp pic.twitter.com/aBZhNXBN0l

Biden cut in—”I didn’t say that”—and countered with the highlight reel of the plan he released in June. As the fight between the two candidates unfolded, it wasn’t actually about which climate plan was most feasible, but whose was the most ambitious to avert the business-as-usual path of the world’s alarming and ever-increasing pollution.

Biden responded that his climate plan calls for 500,000 charging stations for electric vehicles “so by 2030 we’re all electric vehicles.” In addition, he would make a $400 billion investment in research, infrastructure, and clean tech; double offshore wind power, and end fossil fuel subsidies. “But we also have to engage the world while we’re doing it,” Biden said, “we have to walk and chew gum at the same time.”

All that sounds great, right? The problem is in the details. Biden’s goals may sound ambitious—a doubling of offshore wind!—except that in the US today there is only one operational offshore wind plant, far behind Europe’s much more extensive offshore wind development. As ambitious as installing 500,000 electric vehicle stations may sound, it will not take 281 million mostly gas-powered vehicles off the road by 2030, as he claims.

Everyone on stage has already announced their intention to rejoin the Paris climate agreement if they win the presidency, but only Biden took credit for having helped to broker it. Cory Booker was unimpressed. “Nobody should get applause for rejoining the Paris climate accord,” Booker said. “That is kindergarten.”

Environmentalists have also remained skeptical of Biden’s commitment to curb fracking on public lands and its related methane emissions, despite his backing a target of reaching effectively zero emissions by 2050 and a brief moment during the debate in which he implied that he would put an end to fracking.

Asked a direct question if fossil fuels—both coal and gas—would have any place in his administration, Biden stumbled just a moment. “We will work it out,” he said. “We will make sure it’s eliminated and no more subsidies for either of those, any fossil fuels.”

That answer did not impress Jay Inslee, who interrupted with uncharacteristic impatience, “We can not ‘work it out’. The time is up. Our house is on fire. We have to stop using coal in 10 years, and we need a president to do it or it won’t get done. Get off coal. Save this country and the planet.”