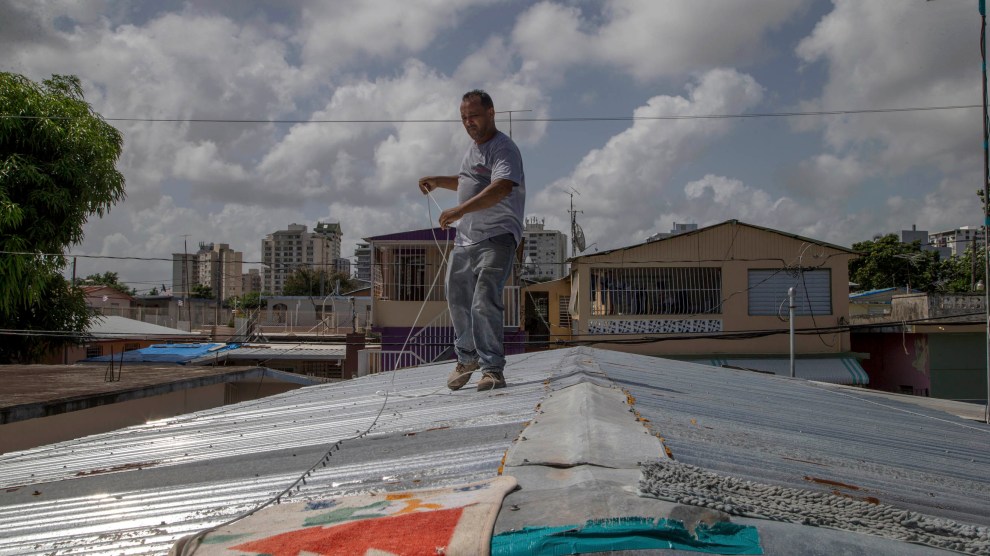 Jorge Ortiz works to tie down his roof as he prepares for the arrival of Tropical Storm Dorian, in the Martín Peña neighborhood of San Juan, Puerto Rico, Tuesday, Aug. 27, 2019.Gianfranco Gaglione/AP

Hurricane Dorian is set to make landfall today in Puerto Rico, with the potential of winds up to about 75 mph and heavy rains. The storm will strike only weeks before the two-year anniversary of Hurricane Maria, which tore the island apart in September 2017. Even though Zoé Laboy, the governor’s chief of staff, told reporters on Sunday that “Puerto Rico is ready,” recovery takes a long time—and even longer given the political and fiscal challenges the island has faced both internally and from the Trump administration.

“The recovery process from disasters, particularly from a catastrophic event like Maria, is measured in years, in decades,” says Samantha Montano, an emergency management and disaster science expert at the University of Nebraska-Omaha. “When you’re looking at a community already undergoing a recovery process, you’re in a more vulnerable state.”

Both during and after Hurricane Maria struck Puerto Rico as a Category 4 hurricane, the island’s devastation and recovery dominated the headlines. Maria left nearly 3,000 Puerto Ricans dead, and damage to the electrical grid meant that almost half a million residents were without power for more than four months. Puerto Rico’s electrical grid had already been in need of an upgrade before the storm, and it took 11 months before the island regained power. An estimated $95 billion in damages burdened a colony already in a decade-long economic slump, unable to contend with $120 billion in outstanding debts and obligations. Economic conditions and the storm caused the island to lose roughly 4 percent of its population, with many young people and families moving to Florida—a dynamic that has further slowed the recovery.

On Tuesday, President Trump falsely claimed on Twitter that Congress granted Puerto Rico $92 billion in aid. According to FEMA’s data on disaster funding, Congress has allocated a total of almost $42.7 billion, less than half of the sum Trump claimed, to the Puerto Rican government for disaster assistance, flood control, and other services related to recovery. Of the amount Congress has approved for Puerto Rico, less than $14 billion has been disbursed to the island so far. In 2017, Trump visited the island in the aftermath of Maria and memorably tossed paper towels to Puerto Ricans in an aid distribution center before cutting short his perfunctory visit to the United States territory.

“Because of federal and local neglect, Puerto Rico is still not prepared for another natural disaster.”

“Because of federal and local neglect, Puerto Rico is still not prepared for another natural disaster,” says José Caraballo-Cueto of the Institute for Interdisciplinary Research at the University of Puerto Rico. “Two years after Maria, thousands of residents are without roofs, the electrical grid is more or less in the same, weak condition, and many roads and bridges in the countryside were not completely restored.” Caraballo-Cueto, who is also the former president of the Puerto Rico Economists Association, says that instead of establishing a systematic approach to using the funds for recovery, the two entities responsible for distributing the money—the local government and the unelected, federally appointed fiscal control board that makes decisions about how Puerto Rico can spend money—”prefer to depend almost exclusively on NGOs and on the federal government to recover.”

Although Dorian likely won’t hit the island with a force comparable to Maria’s Category 4 strength, with its 155 mile an hour winds and torrential rain that stalled over the island, for the thousands who remain without roofs, “it doesn’t matter how much it rains, it’s a big issue,” says Jenniffer Santos-Hernández, an expert in emergency management at the University of Puerto Rico’s Centro de Investigaciones Sociales. Santos-Hernández acknowledges that even though the government and some communities have more resources than they did during and after Maria, “the way that FEMA and the emergency management agency in Puerto Rico collaborate is not necessarily the best, because it’s very politicized.” Emergency management in Puerto Rico is “not really a professional career, but a political appointment.” Given Puerto Rico’s colonial status, the “lack of trust among the actors…becomes amplified.”

“The way that FEMA and the emergency management agency in Puerto Rico collaborate is not necessarily the best, because it’s very politicized.”

Puerto Rico’s recent political turmoil further complicates the issue of both preparedness and recovery, should the storm bring greater damage to the island’s already compromised infrastructure. On July 24, less than two weeks after the Centro de Periodismo Investigativo published 889 pages of a chat group featuring misogynistic and homophobic language and possible evidence of corruption among the governor and 11 of his associates, Puerto Rico Gov. Ricardo Rosselló resigned. On his way out of office, he appointed Pedro Pierluisi as secretary of state—an attempt to ensure that Pierluisi would succeed him as governor—only for a court to rule five days later that the process had been unconstitutional, disqualifying Pierluisi from service. Wanda Vázquez Garced, the island’s secretary of justice, who has faced allegations that she didn’t fully investigate issues around aid distribution after Hurricane Maria, was sworn in as governor on August 7.

The political upheaval caused FEMA to require extra documentation for reimbursement, applicant information, and work plans in Puerto Rico. This policy had been enacted in the fall of 2017 after Hurricane Maria but was eventually rescinded after the government of Puerto Rico established internal controls for the spending. The day after Rosselló’s resignation, FEMA reinstated the policy citing “the ongoing leadership changes within the Puerto Rican government, combined with continued concern over Puerto Rico’s history of fiscal irregularities and mismanagement.”

How that decision would potentially affect funding or additional support should Dorian cause major damage to the island is unclear. But in a response to a March 2019 General Accountability Office review of disaster funding in Puerto Rico, the island’s government said the policy “places an undue burden” on residents applying for federal aid and “significantly delays” reimbursement. The government’s letter asserted, “FEMA has never implemented such a [system] for any previous disaster in the nation.” FEMA did not respond to a request for clarification of this policy.

A punitive federal response to Puerto Rico’s internal political problems was not restricted to FEMA. The Department of Housing and Urban Development announced on August 2 that roughly $9 billion in disaster mitigation funds earmarked for Puerto Rico and the Virgin Islands would be separated from overall disaster mitigation funding for nine other states. Before the HUD decision, funding for the states and the territories was going to be disbursed together, but the new decision allowed HUD to give money to the states while delaying money for the territories. In a statement, HUD Secretary Ben Carson said, “Recovery efforts in jurisdictions prepared to do their part should not be held back due to alleged corruption, fiscal irregularities and fiscal mismanagement occurring in Puerto Rico.” He cited the July 10 arrest and indictment of Julia Keleher, the island’s former education secretary, on charges of improperly steering sizable contracts to associates in 2017.

In the midst of all this activity, the administration of former Gov. Rosselló signed an official disaster preparedness plan in June, Kiara Hernández, a spokesperson for Puerto Rico’s emergency management agency, told Mother Jones Tuesday. When Vázquez came into office, she reviewed the plan, “made some small changes,” and signed it last week. The spokesperson did not respond to a question about how the political turmoil was affecting disaster preparedness overall.

But the newly installed Puerto Rican government is attempting to be organized as it faces its first major challenge. The governor signed an executive order on Monday declaring a state of emergency, the Associated Press reported Tuesday, offering shelter to people living in homes that still have blue tarps as roofs—a number that could involve thousands across the island. The government assured residents that it has more than $140 million in equipment—such as electrical poles, lights, and transformers to handle storm damage—compared to $22 million during Maria, the AP reported. El Nuevo Día, the island’s biggest newspaper, reported Tuesday that the governor has activated the National Guard for support.

Despite preparations, many people are still living with the consequences of Hurricane Maria as they prepare for Dorian. “If your roof blew off in a previous hurricane, and it hasn’t been repaired yet, you’re going to be more vulnerable to the incoming disaster,” disaster expert Montano says. “Then, when you multiply that to the macro scale, you’re starting from behind.”

While the island braced for the storm Wednesday morning—with schools closed and cruise liners diverted—President Trump provided his own perspective on Puerto Rico.

….And by the way, I’m the best thing that’s ever happened to Puerto Rico!