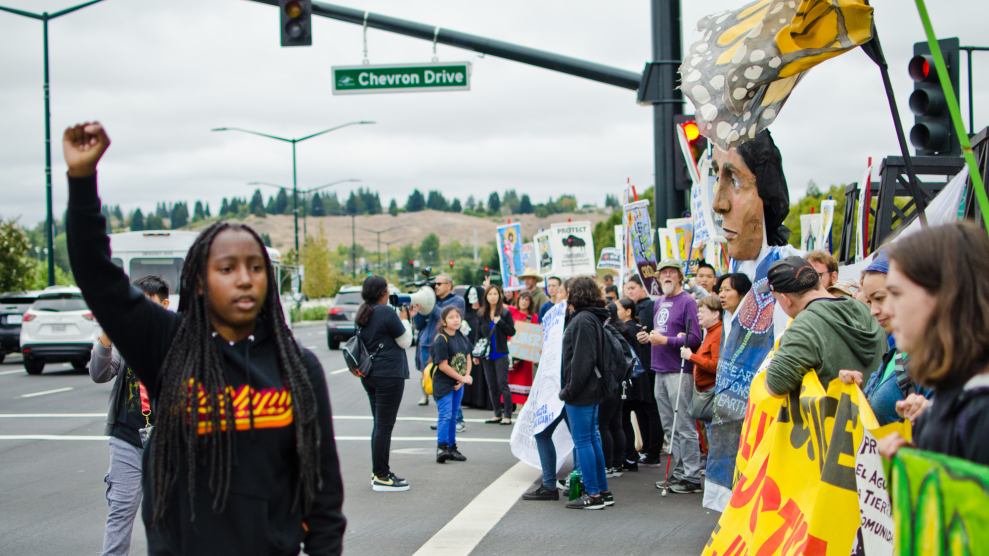 A climate striker with Youth vs. Apocalypse rallies the crowd outside Chevron's headquarters.Bunker Seifert

The security team at Chevron’s behemoth corporate campus in San Ramon, California, was only admitting badged employees, but it couldn’t stop a swarm of protestors from gathering outside the gate on Friday morning. A crowd of several dozen people, many of them teenagers, converged at the oil giant’s global headquarters, heeding a call from local student group Youth vs. Apocalypse to rally against the company for contributing to climate change and allegedly polluting low-income communities of color in the region.

Bearing signs with slogans like “The Dinosaurs Thought They Had Time Too,” young people participating in the latest Friday climate strike led adults in chants imploring Chevron to defund fossil fuels and expand its investments in renewable energy. At some point, their message reached the ears of some of Chevron’s higher-ups, who came out of their offices to meet four students from Youth vs. Apocalypse on a patch of grass just inside the gate.

First opened in 1902, the Chevron Richmond Refinery, not far from San Ramon, has had a number of major accidents in the last few decades. A “huge explosion” in 1999 sent hundreds of local residents rushing to hospitals as the facility emitted noxious fumes. Another major fire in 2012 caused 11,000 people in the wider East Bay region to seek treatment, according to the San Francisco Chronicle. Activists claim that the oil refining process emits airborne toxins year round, while Chevron and some local legislators maintain that the facility is safe. The Richmond refinery has been fined twice in recent years for air quality violations.

Cemre Gonen, a seventeen-year-old San Ramon resident, felt some anxiety as she approached the suits, but the feeling soon dissolved because “I know what I’m talking about and who I’m fighting for,” Gonen tells Mother Jones. “We agreed on some things, like that climate change was real and renewable energy is what we need to focus on.” Yet Gonen says they disagreed on the point of whether nearby communities, such as those living near the refinery in Richmond—a city where 20 percent of residents are African American and 40 percent are Latino—were being harmed by the company’s activities.

In 2012, Scientific American, drawing on California Department of Health statistics and a study by the University of California–Santa Cruz, reported that Richmond residents had higher rates of cancer than people in nearby cities, and were 1.5 times more likely to go to the emergency room for asthma attacks compared to their county’s average. According to Gonen, the Chevron reps said that these health disparities were purely a result of socioeconomic reasons with no proof the refinery was to blame. Gonen said their response “perpetuates environmental racism and classism.”

Mari Rose Taruc, an Oakland resident who’s worked with groups like the Clean Energy Alliance for twenty-five years, said she came to support youth in taking aim at the “world headquarters of destruction.” She cited not only her fears about the refinery, but also Chevron’s outsize contributions to greenhouse gas emissions, and its sustained lobbying against state regulations. Asked what Chevron could do to improve, Taruc replied, “there is no room in the future for fossil fuel companies like Chevron.”

“If we don’t have a planet, who cares about profit?”

In a statement, Chevron said it supports “open and honest dialogue,” is actively considering “energy transition and climate issues,” and is already investing in “low carbon business opportunities.” The statement added that the Richmond refinery recently underwent a modernization project that continues to reduce its emissions.

A 2017 report by the Carbon Disclosure Project ranked Chevron and its products as one of the world’s top 20 contributors to greenhouse gas emissions. This year, the Sacramento Bee reported that the company spent more on lobbying in California than any other group, particularly targeting a bill that aimed to require all cars sold in the state to be emissions-free by 2040.

Youth vs. Apocalypse had an even bolder vision, demanding that Chevron completely cease its use of fossil fuels by 2025. Gonen says that the corporate representatives “agreed that things need to change,” but told her that “historically, change happens slowly, and we need time”—but “we don’t have time,” says Gonen. “They need to be changing right now.” She was not convinced by their appeal to oil’s economic benefits. “If we don’t have a planet, who cares about profit?”