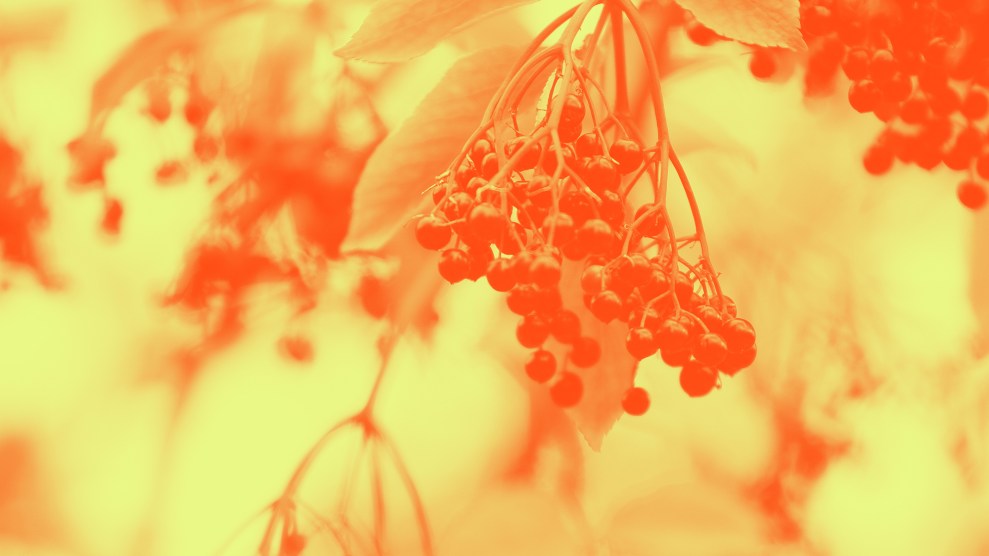 Cloverleaf Farm, a small produce operation in Davis, California, managed to do okay during the extreme drought that lasted from 2012 to 2016. But in the first wet year after the long dry period, the farm lost its entire apricot crop to disease—$40,000 to $50,000 down the drain.

Researchers predict that as climate change worsens, there will be more frequent shifts between extreme dry spells and floods. As Cloverleaf learned the hard way, the phenomenon is already taking a toll on growers in the country’s largest food producing state. During the drought, California’s agricultural and related industries lost $2.7 billion in one year alone. Big cash crops like almonds and grapes are at particular risk in the future, unnerving farmers and vintners already taking hits from erratic and extreme weather.

Katie Fyhrie, a grower at Cloverleaf Farm, worries that the farm won’t be able to keep producing stone fruits—which depend on the timing and duration of winter chill—in the long-term. “It can be confusing to figure out how to move forward,” Fyhrie says. “Where we’re at right now, versus where we’re going to be 10, 20, 30 years down the line. It’s a really tricky thing to balance.”

Learn more about how climate change is transforming dinner—and how farmers are fighting back—on the latest episode of Bite:

Ancient plant species might hold important clues about which crops will survive in a harsher climate. With that in mind, Fyhrie and her team have started growing elderberries. An indigo pearl-sized fruit that grows on a big bushy plant, the elderberry is relatively unknown in the United States; the majority of the commercial market comes from an imported European variety. But Native American communities have been using a Western elderberry subspecies for centuries.

The elderberry that’s native to California grows remarkably well in drought conditions. After a couple of years, you can completely remove irrigation and the plant will keep producing. This last season, Cloverleaf harvested 130 pounds of berries from each of its most mature trees, none of which are irrigated. “That is a huge deal that we’re getting berries that are good for you, really versatile for a lot of products, and that require no additional fertilizer or water,” Fyhrie says.

Elderberries are just one of “many hardy ancient foods and crops that may be a poised to make a twenty-first century comeback.”

Elderberries are just one of “many hardy ancient foods and crops that may be a poised to make a twenty-first century comeback,” as Amanda Little puts it in her recent book The Fate of Food: What We’ll Eat in a Bigger, Hotter, Smarter World. Global warming is “forcing us to think differently about the quality and resilience of the crops we grow—both in the poorest parts of the world and the wealthiest,” she writes. Some researchers are trying to breed almonds, apples, and avocados that are more resistant to hot weather and drier saltier land. General Mills is now using Kernza—derived from ancient perennial wheatgrass native to the Kansas plains—in some of its cereals, snack bars, and crackers. In comparison to traditional wheat, Kernza is much more sustainable and better at sequestering carbon.

With support from a sustainability grant from the California Department of Food and Agriculture awarded in fall of 2018 and in partnership with the University of California–Davis, Cloverleaf is running field trials with elderberries, developing best practices guides for growers, and doing nutritional and market analyses. The idea is to explore boosting grower adoption and consumer interest in the berry.

At Cloverleaf, Fyhrie uses the fruit in syrup, jelly, and even fruit leathers and an elderflower cordial. Dried elderberries can be used for tea and baked goods. They’re also used in food coloring and dyes. Because of the berries’ antioxidant and antiviral properties (in certain subspecies at least), they’re popular in the health food community and are commonly used as supplements or to treat colds and flu.

While not all native plants are going to fare well under climate change, many have survived millennia in their changing environments, adapting along the way. “There is so much food that grows everywhere without anybody really doing much at all. And here we are cover cropping, spreading compost, tilling, putting on plastic mulch, irrigating daily, weeding, constantly dealing with crop losses from pests,” Fyhrie says. “Everything that we’re growing for our profit is so high intensity in terms of labor and resources, and then we’re surrounded on all sides by these plants that are just producing and producing. It just didn’t compute that we would only be growing these really resource intensive crops and basically ignoring all the resources that just exist on this land.”

Elderberries won’t replace apricots any time soon. Developing ancient and native crops or breeding new ones comes with a host of complications and long lead times. Processing elderberries requires a lot of labor, and they can be hard to digest. Kernza grains are less than a quarter the size of standard wheat grains, making harvesting difficult and costly, as Little points out, and recent crop failures limited General Mills’ Kernza rollout. Plus, changing consumers’ tastes is no easy feat.

“The more that we start to incorporate those now—while we have the water to establish them—the more resilient small farms will be in the future.”

But, there’s potential. When I stopped by the Davis Food Co-op on my way home from Cloverleaf, the woman at the wellness counter told me elderberries haven’t reached CBD status, but she’s definitely noticed an uptick in products lining the shelves. At first, Kernza was only used in boutique west coast breweries and bakeries; now it’s being adopted by one the country’s largest multinational corporations. So to Fyhrie, exploring new options like elderberries feels worth the squeeze.

She thinks it’s important to start to “really think about what type of plants can we get away with not watering, can we get away with putting less fertilizer, can deal with the heat, don’t need as much chill in the winter,” she says. “The more that we start to incorporate those now—while we have the water to establish them—the more resilient small farms will be in the future.”