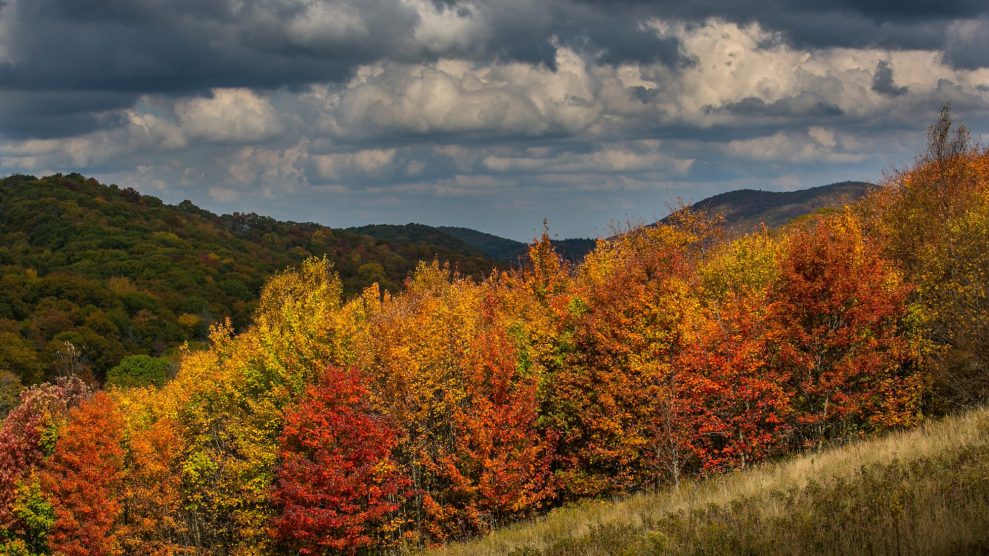 The fall tree colors on Max Patch, a bald mountain located along the Appalachian Trail in North Carolina.George Rose/Getty

Amid farm fields in upstate New York is a wooden platform that serves as the Appalachian Trail’s very own train station. It sits on the Metro-North Harlem line, which shuttles commuters in and out of New York City on weekdays. On weekends, it offers direct access to the wilderness, though not every New Yorker knows about it. So, for the last six years, the National Parks Conservation Association and the Harlem Valley Appalachian Trail Community have hosted Appalachian Trail Day to get the word out.

This time of year, trails like this one are ripe for leaf peeping, an activity which, for many Americans, means heading to state and national parks—often by car. Others who want to enjoy the sights of peak fall foliage may choose to drive along scenic highways, of which the US built hundreds of thousands of miles to encourage driving for pleasure. Today, road trips remain the preferred activity for nearly two-thirds of fall travelers, according to the American Automobile Association.

Yet the ever-growing urgency of climate change highlights a glaring irony: Taking a scenic drive contributes to the demise of the very things that make those trips, well, scenic.

Many private companies offer alternatives to car-powered fall tours, including scenic train rides aboard vintage trains, tour buses to far-flung parks, and boat tours along rivers flanked by trees. Those can get pricey, though, with some options running upwards of $100 each way.

Luckily, in some parts of the country, transit alternatives offer other ways to escape the city and be shuttled right into the heart of autumn’s reds, oranges, and yellows.

The train to the upstate New York trail, for example, takes an hour and a half from Grand Central Terminal, for $17.50 each way. On Appalachian Trail Day, which took place earlier this month, NPCA and its partner hosted a number of fall activities, including pumpkin picking for families and guided hikes through the lush forest. There is parking, but the organizers strongly encouraged families to take the commuter train.

“You are literally stepping off of the train onto the trail,” says Lauren Cosgrove, who manages NPCA’s northeast branch. “And you’ll be in the beautiful peak fall foliage of the Harlem Valley.”

Much of the organization’s other work in New York City involves improving access to various national parks in the area. But just as importantly, the NPCA also focuses on educating people about what’s already available. “We are actively promoting making people aware that there are a dozen national parks in the city, and another dozen in the greater tri-state area that are all accessible by public transportation,” Cosgrove says.

Overall, the National Park Service’s latest transit inventory and performance report identifies 99 transit systems in 65 of its more than 400 parks nationwide. Most—81 percent—are operated by the private sector, and nearly two-thirds consisted of shuttles, buses, vans, or trams. Just 4 percent involve railway. More than half operate on a seasonal basis, running three to six months of the year.

That includes free shuttles, like the one from Springdale, Utah, to Zion National Park, which bans cars between March and November. (The caveat here, of course, is that you have to get to Springdale first.) It also includes free and low-fare shuttles by the Yosemite Area Regional Transportation System from counties like Fresno, Mariposa, and Merced to Yosemite National Park—where dogwood and maple trees offer a “pop of color” amid the valley’s abundant evergreens.

Those nostalgic for the old-fashioned activity of admiring fall foliage from a train have public options, too. Since 1989, NPS has partnered with the nonprofit Cuyahoga Valley Scenic Railroad in Ohio to run trains to the valley from Cleveland and Akron. In 2017, CVSR introduced the Fall Flyer, a limited two-hour excursion through the Cuyahoga Valley National Park on weekends specifically for leaf peepers. The route runs from October to the beginning of November, when the region hits peak foliage, and costs between $20 and $25 per passenger.

Meanwhile, scenic train rides have long been a selling point for Amtrak. In the Northeast, for example, the route between New York City and Montreal offers a leisurely, scenic ride through the Hudson Valley and the Adirondack Mountains. Out west, Amtrak’s California Zephyr from San Francisco to Denver cuts through Tahoe National Forest in Utah and several other parks in Colorado. Tickets aren’t cheap, though: A one-way ticket can cost as much as $100 or so.

But going leaf peeping doesn’t have to mean organizing a great escape away from the city. In cities where trees are abundant, familiar urban parks can still offer city dweller a breathtaking view of fall. New York City, for example, manages some 30,000 acres of public parkland, which are filled with historic sites and walkable and bike-friendly paths—along with ample tree cover. (Manhattan’s Central Park alone boasts roughly 18,000 trees.)

If you’re itching to get out of town as peak fall foliage makes its way across the US, it’s tempting to consider a road trip to a remote woodsy area to immerse yourself in the changing leaves. There aren’t always easy options to get that same experience without the car, but some of these transit alternatives could provide a model for more like them in the future.