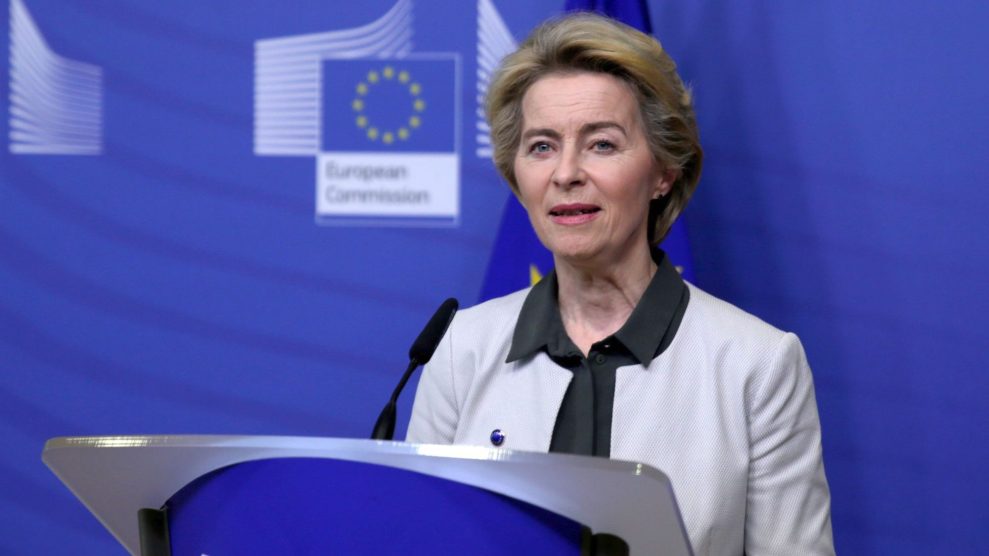 This article was originally published in the Guardian and appears here as part of our Climate Desk Partnership.

Nearly every major aspect of the European economy is to be re-evaluated in light of the imperatives of the climate and ecological emergency, according to sweeping new plans set out by the European commission on Wednesday.

The comprehensive nature of the European Green Deal—which encompasses the air we breathe to how food is grown, from how we travel to the buildings we inhabit—was set out in a flurry of documents as Ursula von der Leyen, the new commission president, made her appeal to member states and parliamentarians in Brussels to back the proposals, which would represent the biggest overhaul of policy since the foundation of the modern EU.

Von der Leyen said the package was aimed at economic growth and increasing prosperity. “[This] is our new growth strategy, for a growth that gives back more than it takes away,” she said. “It shows how to transform our way of living and working, of producing and consuming, so that we live healthier [lives] and make our businesses innovate. We will help our economy to be a global leader by moving first and moving fast.”

As well as bidding to lead the world on climate action with a proposed target of net-zero carbon by 2050 and halving emissions by 2030, the EU will delve far more deeply into the root problems that contribute to carbon emissions and pollution. For instance, in manufacturing: in previous decades, the EU was content to set targets for recycling rates; under the European Green Deal, regulators would set specific standards on the manufacturing of goods to create a circular economy and phase out unnecessary plastic and other waste before it is created.

From 2021, at least 40 percent of the budget for the common agricultural policy and 30 percent of fisheries subsidies would be devoted to tackling climate change and reducing greenhouse gas emissions, instead of contributing to higher emissions and environmental degradation, as many of these subsidies do at present.

Toxic air and its health impacts would be tackled through tougher air quality requirements, and energy targets would be raised to generate more energy from renewable sources, up to 100 percent by 2050. More freight would be transported by rail and water, and greenhouse gas emissions from air travel would be reduced.

The emissions reduction target for 2030 was proposed at a level of 50-55 percent, with a new law enshrining the commitment to net zero carbon for 2050. As an inducement to the member states reluctant to sign up to the 2030 and 2050 targets—Poland, the Czech Republic and Hungary—Von der Leyen promised €100 billion ($111 billion) to help finance the transition to a low-carbon economy, along with the potential for a carbon border tax to be levied on imports to the EU from countries without sufficiently stringent carbon targets of their own.

Leaders will discuss the emissions goals when they meet in Brussels at a summit on Thursday, but agreement still appears some way off. Failure to agree a second time, following a previous attempt in June, would be a blow to the EU’s standing at the UN climate talks, now reaching their final days in Madrid.

One senior EU official said: “One of the elements that the heads of state and government will have to take into account is the pressure outside the room on this. This is climate week, right. So there might be a deal, there might not be a deal.”

The commission will also face a difficult task in gaining full backing for the rest of the package among all member states. As well as those concerned about the carbon targets, there are the powerful agricultural and fishing lobbies in several states with concerns over reforms to the subsidy regime, and industries such as car manufacturing and chemicals that will face new regulations

In one indication of the troubles yet to come, the UK on Wednesday joined the Czech Republic and France in blocking a deal on a set of rules governing which financial products can be labelled “green” and “sustainable.” France was concerned that its nuclear industry would lose out from the “taxonomy for sustainable finance.”

Negotiations among member states and the European parliament on the green financing proposals are expected to resume on Monday.

Green campaigners welcomed the aims of the European Green Deal but called for more detail and higher ambition, including a strengthening of the emissions target to a 65 percent cut by 2030.

Franziska Achterberg, EU spokesperson for Greenpeace, said: “The climate targets [the commission is] proposing would be too little too late. On protecting nature, much is aspirational and needs to be fleshed out. The detailed measures that will follow must tackle the production and consumption patterns that have brought us to the brink.”

Some campaigners at the UN climate talks in Madrid also called for the EU to bring forward its international proposals faster, to give more momentum to the push for tougher carbon targets under the Paris agreement. Under the commission’s proposals, the plans could not be formally adopted until next summer, giving only a few months before the crunch 2020 climate conference in Glasgow.

Wendel Trio of the Climate Action Network said: “Timing is everything. Now EU member states have a big responsibility to agree on a much higher 2030 climate target at the European Council in June 2020.”

“The proposed package is comprehensive, identifying the right areas for action – from biodiversity and nature restoration to climate change and stopping deforestation,” said Ester Asin, director of the European policy office at WWF. “However, by emphasizing continued economic growth as a key objective, the commission has missed an opportunity to challenge the traditional growth paradigm in favor of an approach that would respect planetary boundaries.”