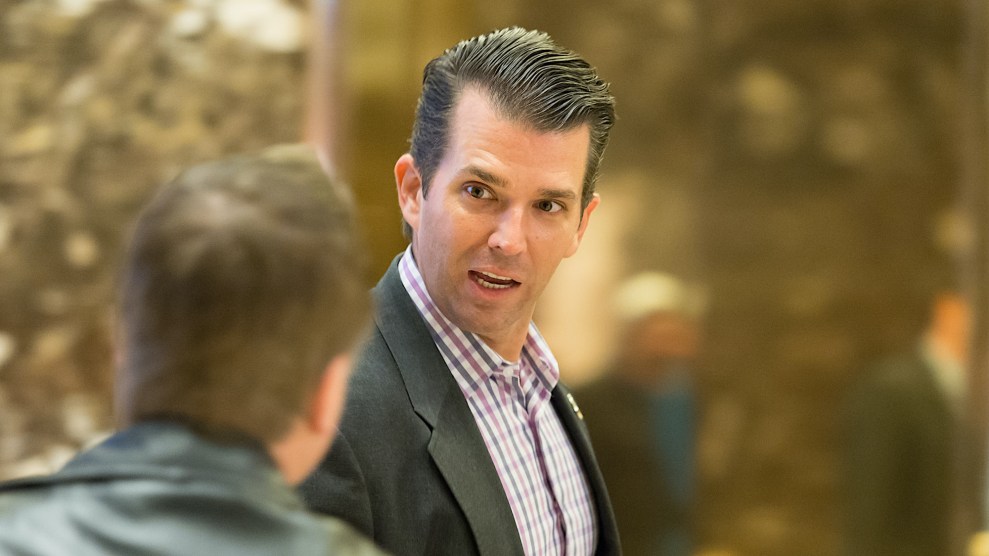 On Tuesday morning, Donald Trump Jr. took to Twitter to fan conspiratorial flames on the origins of the devastating Australian wildfires, which have grown to encompass an area the size of Scotland. Sharing a story from the Rupert Murdoch-owned, conservative Australian, Trump blamed the fires not on climate change—but arsonists.

Truly Disgusting that people would do this! God Bless Australia.
More than 180 alleged arsonists have been arrested since the start of the bushfire season, with 29 blazes deliberately lit in the Shoalhaven region of southeast NSW in just three months. https://t.co/xP0PtMQbuD

The Tweet is just one part of a broader right-wing narrative that questions whether climate change is the real reason for the disproportionately large and intense fire season, despite overwhelming evidence and consensus among the experts that it is. Instead, Trump’s new theory replaces the science with the much simpler, though still human-caused, explanation of criminal activity.

After Trump Jr.’s tweet, conservative media outlets quickly picked up and amplified the story. They championed it as finally revealing the true cause of the catastrophe, not to mention undermining the legitimacy of climate change and adding that extra thrill of a conspiracy theory. Quick to join the fight was an army of twitter bots that promoted the #ArsonEmergency.

In fact, while arsonists have been a troubling concern in Australia during fire seasons, no evidence exists to suggest a spike in that activity, or that the current crisis has been caused or exacerbated by intentional fire setting.

Nearly 200 people have already been arrested for deliberately starting the disastrous fires in Australia.

Let’s look at the real numbers behind the tweet. Of the 183 alleged arsonists charged since November 8, 2019, only 24 were charged for deliberately setting bushfires, according to the New South Wales police. Forty-seven people were charged with “discarding a lighted cigarette or match on land,” which may be irresponsible given the ferocity of the wildfires but falls short of the crime of arson. Another 53 people failed to comply with the fire ban, an umbrella charge that includes lighting or maintaining any open-air flames. This leaves open a wide variety of ticket-able offenses that aren’t nefarious, like having a bonfire. In fact, NSW law even states that “it is possible for a person to commit this offense without lighting a fire.”

When considering the rate of intentionally-caused bushfires in NSW, where the flames have been most devastating, the statistics tell the opposite story. Bushfire arson actually went down 24 percent—from 1546 incidents to 1176—between October 2016 and September 2019, according to the most recent data available from NSW Bureau of Crime Statistics and Research.

That same data shows that police activity against fire offenders has increased in recent weeks. In the entire year leading up to this fire season, 45 people were charged with intentionally causing bush fires in NSW, while 24 were charged with that in only the last three months. In an interview with USA Today, NSW Police Commissioner Gary Worboys indicated that the heightened threat of fires gave his department reason to scrutinize those laws more closely.

“I know a lot of them were doing things like using fireworks or lighting fires to camp or cook food,” he said. “We make no apologies for being so vigilant.”