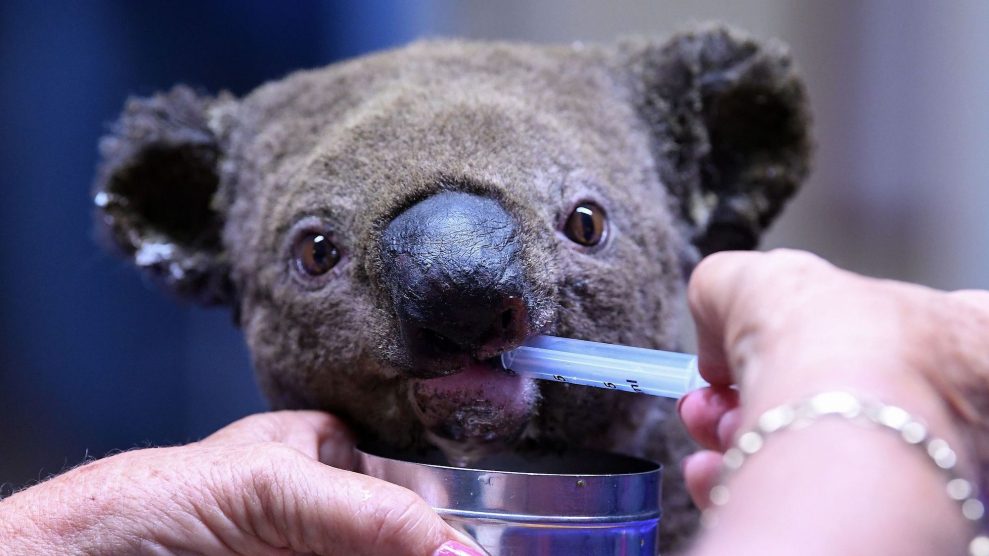 Numbers help frame the sheer enormity and devastation of the Australian wildfires. The flames have overrun more than 32,000-square miles of landacross Australia, most acutely in the southeast states of New South Wales and Victoria. The fires have engulfed an area more than 50 times larger than California’s Mendocino Fire, the largest wildfire in the state’s history and are twice the size of the 2019 fire that devastated Brazil’s Amazon rain forest. By Friday, 27 people have died and and more than 50 fires remain uncontained.

The number of animals that have been affected by this inferno?  One billion.

“What [the estimate] implies is that it’s a catastrophic number,” says Greg Giusti, a retired forest and wildlife management expert from the University of California. “Would I say that number is absolute? Probably not. It’s made to demonstrate the enormity of the impact.”

As Australian wildlife specialists and ecologists were attempting to tally the damage from the blazes, on January 3 University of Sydney ecology professor Chris Dickman provided the first estimate of the effects on animals, estimating that 480 million have perished. This number included fire damage going back to September 2019 and excluded fires outside of New South Wales (NSW).  His methodology was simple: He multiplied data on mammal, reptile and bird population densities from a 2007 World Wildlife Fund report “on the impacts of land clearing on Australian wildlife in New South Wales” to cover an area equivalent to the current burn zones. In Bloomberg’s coverage, Dickman noted that astonishing number is very likely conservative and almost certainly inexact. Subsequently, he doubled his estimate.

One of the problems in figuring out the true magnitude of the destruction to wildlife is that there is no gold standard when it comes to assessing the populations of an ecosystem at large, John Zichy-Woinarski, an environmental research professor at Charles Darwin University, on Australia’s north coast, where the fire season has been much milder, wrote in an email. Nonetheless, even if it’s a rough guess and given the context, he thinks that the number-crunching behind the Dickman estimate is sound. In a separate 2017 study (which included Dickman and other experts), Woinarski surveyed bird populations in NSW, and came up with essentially the same number as the WWF report, which lists 20.7 birds per hectare. Similarly, he says the initial estimate on mammal density in NSW—not including bats—was found to be 17.5 individuals per hectare. However, the number of reptiles, the third animal-type factored into Dickman’s prediction, gave Woinarski pause. He says surveys of reptile populations are the most sparse of the three and are counted at the highest average density—130 individuals per hectare—which leaves the largest margin for error. Factor in other animal types, like insects, frogs, and bats, and Woinarski says the count would increase “appreciably.”

In a perfect world, Woinarski says individual animals in a given population could be tagged and tracked before a cataclysmic event, then the status of that group could give an idea of the community’s health in general. In the past, density surveys were retaken in the burnt land, then compared to the populations in similar areas. The more specific that one attempts to get, the more caveats that must be factored in. But there has never been an event as devastating to habitats as these fires.

Confirming the plausible accuracy of 1 billion is probably impossible because most of the information needed for an informed guess isn’t available to begin with. Though, that doesn’t necessarily devalue the estimate, especially when it is likely an underestimate, which Giusti suspects. There are “a lot of layers to this onion,” he says.

There are several other challenges to assessing the damage when there are so many species to consider. Animal populations may not be consistently spread over an environment, making it difficult to gain a precise estimate of them, plus the unique severity of the fires make mortality rates difficult to project. With the animal’s ecosystems completely incinerated, it becomes difficult to track what happens once the wildfires have ended.

There are some species whose populations, and whose losses, can be more accurately accounted for. Those that are endangered, for instance, or those that play an outsized role in the environment—like the greater bilby of southern Australia —or animals that are hunted and need to be tracked for sustainability. Those species are the exceptions. Populations that don’t fall into categories that justify an ecologist’s close watch typically aren’t meticulously tracked. When the time comes to tally losses, specifics are impossible, since data on the animal communities prior to the fires wasn’t collected. “There would be individual studies that look at trends, or particular populations of animals—rare and special species. Those are the ones that get the attention required for a data set,”  says Giusti. “That’s likely why Australia’s environmental minister was able to give out a specific prediction on the number of koalas, an iconic species, that have died.”  When minister for the environment Sussan Ley predicted that 30 percent of koalas in NSW were likely killed by fires, she could speak with specificity because as endangered species and cultural icons, koalas are closely tracked by ecologists. (Indeed, the public suffering of Australia’s koalas and kangaroos have generated significant donations that may even help fund the recovery generally for thebiosphere.)

On Kangaroo Island, to the west of NSW and off the coast of South Australia, an exact census of the glossy-black cockatoo, a small black bird, is kept by biologists. The cockatoo builds nests in trees across the island, which has seen a third of its landmass enveloped in flame. Though the population may be devastated, Daniella Teixeira, a PhD candidate at the University of Queensland who monitors the species, told me that tallying more precise losses is possible with available data, “From mapping, we could fairly easily quantify the number of nest trees lost,” she wrote in an email. And destroyed nests are a valuable key to determining the population status in the long run. Even though the damage done to most-studied and beloved species in Australia will be the most obvious, what their future holds will be more predictable than for the vast majority of animal populations that cannot be tracked with precision. Thousands more glossy-black cockatoos live along the country’s eastern coast, and Teixeira says biologists “have no idea what the losses might be.”

One reason that it’s so difficult to tease out the specifics of a number like one billion dead animals, Woinarski says, is because that number doesn’t factor in the multitude of consequences for the many species it contains. “Many individuals killed of a common species may not have a great conservation consequences,” he wrote in an email, “whereas tens or hundreds of individuals killed from a threatened species may be catastrophic for that species.”

Then there is unprecedented nature of the fires themselves, which makes mapping the magnitude of destruction a guessing game. The Australian fire season typically begins in December and runs through March. This year the season began unusually early in September, which is spring in the southern hemisphere. Not only does this mean an extended period of burning, but the fires began at an especially vulnerable time for the biological clock of animals. Spring means a higher proportion of baby animals, which represent the future of the species but are less capable of flight from danger. When fires appear later in the year, the youngest generation is more developed. “It’s possible some populations lost an entire generation of progeny,” Gusti says.

When the seasonal wildfires do appear, they’re rarely at the ferocity of the ones today—some of which are moving at 55 miles an hour. In the last 50 years, only two other fire seasons have consumed the landmass of this one, and the ones today are made especially toxic by the 2,500 homes and countless vehicles fueling the flames. “Because of the fuel loading, the weather conditions, the rapidity,” Gusti says, “animals that run or walk or jump are at risk of simply being overtaken.”

Then, there are the ones that survive. A focus point for Woinarski is the lasting effects these fires will have for the animals that don’t perish during the flames. As they return to their homes, the resources that allowed for earlier populations to thrive could be wiped out. Dickman’s estimate does not say that 1 billion animals were killed immediately in the Australian fires, but that this is the number “affected.” Considering the resources for rebuilding available to affected populations however, leaves Woinarski pessimistic: “My opinion is that most of the ‘affected’ animals will have died.”