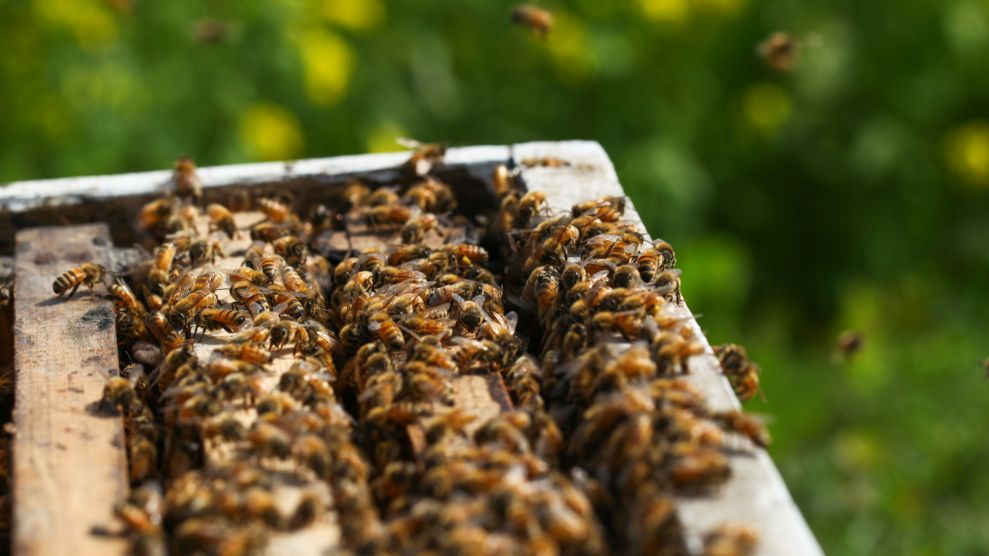 Mike Potts was aware he was at risk of being a victim of crime, he just didn’t think it would happen to him. But Potts is an owner of an increasingly valuable commodity that thieves are targeting with growing sophistication in the US: bees.

A booming demand for honeybees for pollination drew Potts, owner of Pottsy’s Pollination in Oregon, to load 400 hives of his bees on trucks and drive them down to California’s agricultural heartland last month. He unloaded them to a holding area just outside Yuba City and returned just a few days later to find 92 hives had been whisked away by thieves.

“I’ve heard that there had been some stealing but didn’t think it would happen to me. It’s frustrating because it’s getting harder and harder to keep bees alive.”

“I pulled in the yard and noticed that there was some stuff missing,” said Potts, who estimated the theft cost him $44,000. Police subsequently pulled over three suspicious beekeepers traveling late at night, to no avail. “I’ve heard that there had been some stealing but didn’t think it would happen to me. It’s frustrating because it’s getting harder and harder to keep bees alive. And then you transport them down and they just get taken.”

The theft is the latest in a string of beehive heists, often undertaken at the dead of night using forklifts and trucks. Hives are regularly split open or dismantled, interventions that can kill tens of thousands of the kidnapped bees. The problem has become severe enough in California that certain police officers now specialize in hive crime.

“Hive theft has always been an issue but it has definitely increased over the last eight years,” said Rowdy Freeman, a Butte county police officer who is commonly referred to as “bee theft detective.” Freeman has compiled figures showing there was an explosion in California hive thefts in 2016, with 1,695 being taken, compared with 101 in 2015. In 2017, the figure was 1,048 hives.

“The number fluctuates but it is definitely something that will continue and that will require resources and advancements in the use of technology to help prevent and deter theft.”

The center of beehive thefts is California’s Central Valley, a fertile stretch of agricultural land responsible for about a quarter of all the produce grown in the US. This huge output—of lettuce, grapes, lemons, apricots and more—requires pollination from far more bees than naturally live in the area.

The main driver of the demand for honeybees is the almond industry, which has doubled in size over the past two decades. There are currently 1.17m acres of almonds in California that require pollination which, at a standard rate of two beehives an acre, means the industry somehow needs to conjure up 2.34m beehives for a short window of time each February, when almond trees start to blossom.

Beekeepers from across the US congregate in the Central Valley in a sort of annual almond jamboree; more than two-thirds of the nation’s commercially managed honeybees sent on trucks to a 50-mile-wide strip of fertile land. Unlike native, wild bees like bumblebees, honeybees are carefully marshaled in hives and are now more valuable as contract pollination workers than as honey producers.

But the almond industry’s growth is heightening the demand for more bees at a time when even maintaining current numbers is a struggle. Due to the ravages of deadly mites, diseases and toxic pesticides, beekeepers now typically lose 40% of their colonies each winter, only making these numbers up through splitting hives and using various treatments and supplements to boost reproduction rates.

This dynamic—growing demand for pollinators at a time when supply is under pressure—has seen the typical cost of a hive for pollination shoot up, from just $35 a few years ago to $200, and upwards, now. Pollination has become big business, causing some desperate beekeepers, or organized gangs, to be drawn to beehive crime.

“Normal people can’t just go steal 500 hives with a forklift and a truck,” said Charley Nye, a beekeeper researcher at University of California, Davis. “So it’s a pretty small pool of people that are able to steal them. But the reward is so big that I think it can be tempting to people to do that.”

Lloyd Cunniff, who has been involved in beekeeping since he was 13 years old, never intended to bring his bees to the Central Valley, where endless rows of almond trees stretch out across the landscape in almost every direction.

But Cunniff, now 59, had seen his third-generation apiary in Montana decimated by colony collapse disorder—a mysterious syndrome where the worker bees vacate a hive en masse—and needed the income. In January 2017, he loaded 488 beehives, each handmade in distinctive pine and cedar, and headed west.

Through a trusted intermediary, Cunniff set his hives down to rest in a remote area near a levee. As is typical in the beekeeping world, there were no fences or other security systems to protect them. The next day, amid heavy fog, Cunniff went back to find them.

“We had a GPS reading and we drove out there and my hired man said: ‘There’s your turn.’ And I turned in there and I said: ‘This can’t be the right turn.’ And he said: ‘Why?’ I said: ‘Because there’s no bees sitting,’” Cunniff recalled. “And I thought, ‘Uh-oh.’”

All 488 boxes had gone, quickly and skillfully loaded on to a truck and spirited away, costing Cunniff not just the $100,000 in pollination fees but also the basis of his livelihood. He wasn’t to know, but he was just one of many victims of a well-orchestrated operation.

Not long after the theft, police were called to a scruffy field near Fresno where they saw something akin to bee carnage. Beehives were scattered randomly across the land, some open with their innards torn out, others scratched and daubed in paint. An irate swarm of bees made officers wary of exiting their cars.

“It was like a chop shop for bees,” said Andres Solis, a Fresno detective who specializes in agricultural crime. “None of the boxes matched, it was really untidy. And there were a lot of aggressive bees.”

Police called in beekeepers who estimated there were 2,500 hives belonging to a variety of legal owners. A nearby man, Pavel Tveretinov, was arrested under suspicion that he was hacking up the hives in order to multiply them and sell them on to needy growers.

An alleged accomplice, Vitaliy Yeroshenko, was also arrested and both now face trial. “Victims started coming out of the woodwork after we started putting it out there,” Solis said. “We looked at what we saw and thought none of these beehives belonged to these gentlemen.”

The overall number of thefts dropped following the arrests but beekeepers are concerned that the ballooning demand for honeybees is only going to spur further criminal enterprises. The fallout from the ecological crisis in the bee, and wider insect, world is likely to include more and more bee rustlers.

“There’s a shortage of bees this year, again,” Cunniff said. “You watch in this next week or two, there’s going to be stealing of bees like crazy down here.

“It was just my turn. That’s how I look at it because it happens to somebody every year down here. They’re stealing them all the time. It’s just going to keep getting bigger and bigger.”