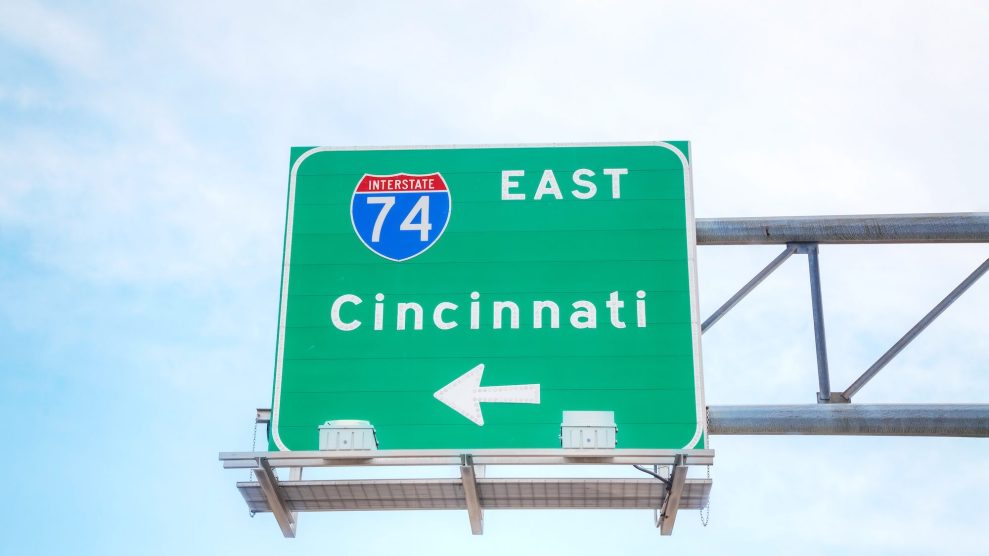 In 2017, when the Trump administration withdrew from the 2015 Paris Climate Agreement—an international treaty that attempted to avert climate catastrophe by cutting global emissions—John Cranley, the Democratic mayor of Cincinnati, Ohio, joined other mayors across the country to announce his intention to remain faithful to the agreement’s primary goal of keeping the rise of global temperatures below 1.5 degrees Celsius in this century. Cranley and leaders from from dozens of cities like San Francisco and Chicago even went a step further, promising to work toward a 100 percent transition to clean energy sources, with ambitious deadlines.

So, in 2018, Cincinnati announced its own 2035 mandate for carbon neutrality—the 100th US city to do so—by turning to solar energy. “I was inspired to [pursue this project] out of anger over Trump’s withdrawal from the Paris accords,” Cranley says, describing the frustration he suspects he shared with many other city leaders who made the carbon-neutral pledge.

Cincinnati planned to create the largest municipal-run solar farm in the country, and two years later, it looks like they’ve succeeded. “This really is a big deal,” says Gregory Wetstone, who heads the American Council on Renewable Energy, an organization that advocates for a transition to renewables in the energy sector. “Our team could not find anything that competes with it at a municipal level.”

So how did Cincinnati make that happen?

In 2018, the city was awarded a $2.5 million Bloomberg Philanthropies grant that was aimed to provide technical assistance to cities eager to address climate change. Cincinnati had considered introducing solar panels to its energy portfolio for years but lacked the resources city managers needed in order to determine how to reach that goal. The flat, rural expanses of land around the city turned out to be perfect for installing a vast solar farm the size of 750 football fields. Cranley realized that with this level of investment in solar energy, “an enormous amount of carbon reduction…can occur.” And, though environmental sustainability was a priority, Cranley notes that the solar is also “cost neutral,” which made the project especially appealing.

The plan was to have solar deliver 100 Megawatts of energy, which would offset approximately one quarter of the municipality’s total utility usage. In January, the project entered what’s known as an “interconnection agreement” with the electrical grid operator, which means that the city would be able to plug into the physical framework through which power travels in the energy network. Ground-breaking is scheduled for later this year. By 2021, Cincinnati will have the largest city-established solar farm in America.

The city of Cincinnati negotiated a 20-year flat-rate contract with Hecate Energy, a Chicago-based solar installer and operator, which would cover construction costs and purchase 100 MW of electricity a year. A locally-based company, Creekwood Energy, is serving as the project manager. A former soybean farm, about 40 miles east of the city, will be the solar farm’s location.

From the sky, the plot of land looks like an enormous Tetris game gone wrong—a series of rectangular pieces bordering each other without forming a cohesive shape. Eventually, a plain of 310,000 panels will occupy 1,000 acres and provide 100 MW to the city. Here’s the rough breakdown: municipal buildings like the fire and police stations, sewage treatment and water consume 125 MW per year and in the future solar will contribute 35 MW to that. Another 65 MW would go to cover utility usage by city residents, who use about 800 MW annually. All of these numbers are estimates, however, because the proportion of power usage that solar can provide on a given day depends on how much the panels can produce. On a bright summer afternoon, for instance, when energy is in peak demand, officials estimate that the panels could even produce sufficient energy to power all of the city’s services.

The cost of the energy itself will be allocated from Cincinnati’s already-existing power budget, which typically comes out to about $21 million per year. According to Michael Forrester, the city energy manager, that should roughly equal $2.7 million in electricity costs a year for the city services. Conservatively, he estimates the city should save almost $2 million over the duration of this 20-year contract and the equivalent of 30,000 cars worth of emissions annually. If it didn’t make sense for taxpayers, Forrester says, “We wouldn’t do it.”

In 2015, when Obama signed the climate agreement, the costs for alternative energy sources like solar were prohibitively expensive for a city the size of Cincinnati. Wetstone notes that those costs “have declined dramatically in the last decade.” Forrester agrees and acknowledges there is a measurable difference between 2015 and 2020. “The cost of solar has significantly fallen over the last ten years–75 to 80 percent,” he says. “The market has shifted.”

Even with this relative success, Cincinnati will have to make substantial efforts to achieve its 2035 goal. Residential power usage demands 800 MW and that doesn’t include the need to direct another 90 MW to all of its other energy requirements. “You can’t predict the future, but you know the old statement about how to eat an elephant?” Forrester asks. “One bite at a time.”