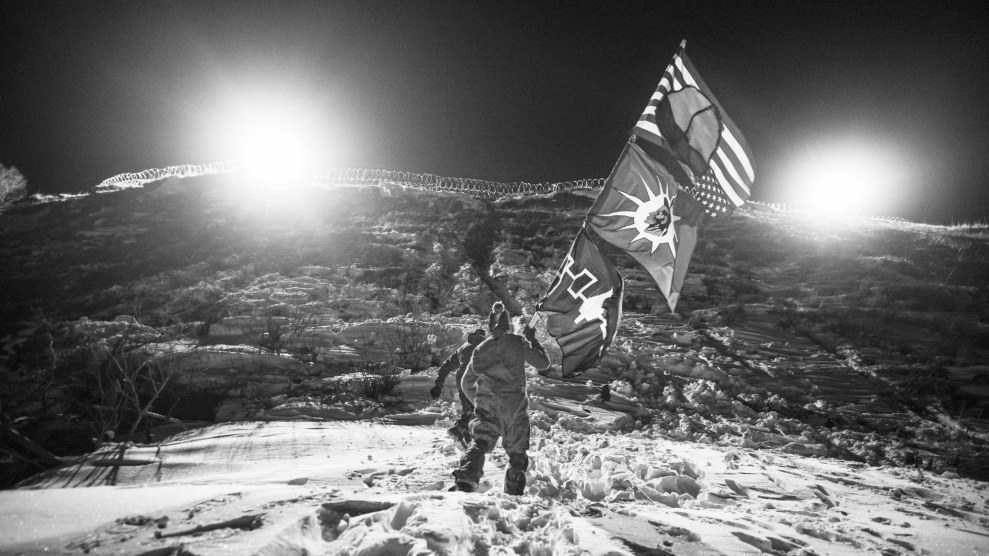 You may remember the Keystone XL pipeline from 2015, when a movement galvanized by the growing threat of climate change successfully pushed President Obama to reject the project. But Keystone XL, which would pump some of Canada’s most dangerous oil products over nearly 1,200 miles of US land and Indigenous territories largely for export to other countries, is back: In January, thanks to Trump’s efforts to revive the project, TC Energy, the company behind the major oil delivery system, said that it would begin preparing for construction in Montana, South Dakota, and Nebraska as soon as this month.

TC Energy’s refusal to admit defeat has led many environmental leaders to nickname the project, first commissioned in 2010, “the zombie pipeline”: no matter how many times they kill it, it rears its head again. Yet opposition to the project is no less undying.

“We’ve been fighting this for ten years,” says Joye Braun, a member of the Cheyenne River Sioux Tribe and front-line organizer with the Indigenous Environmental Network. Braun has long worked to mobilize Great Plains communities against oil pipeline construction, but the unique risks and history of this project gives it special weight. “Kesytone XL is the granddaddy of them all. Obama stopped it, Trump revived it, [while] tribes have said a very firm ‘no. Not on our land.'” Braun, along with other Indigenous organizers and their allies, are gearing up to once again resist. “I’m not going to tell anyone what our plans are, but we will exercise every right that we have available to stop this.”

The project has been controversial from the beginning. Opponents say that it foolishly expands oil infrastructure when the US needs to be rapidly transitioning to renewables. Keystone XL would transport tar sands—which scientists have called the “dirtiest” fossil fuel because it creates toxic byproducts, causes extra carbon emissions when burned, and is harder to clean up when spilled—from Alberta, Canada, where the tar sands industry is especially destructive and is rapidly clearing precious boreal forests, to Steele City, Nebraska. From there, the oil would flow into a pipeline network that reaches export terminals on the Gulf of Mexico. Government data suggests that much of the product flowing through Keystone XL would never be available to American consumers, a notion that TC Energy disputes.

“We will exercise every right that we have available to stop this.”

In order to cross the Canadian border, the pipeline needs a permit from the State Department, which is required under federal statutes like the National Environmental Policy Act to analyze the project’s environmental impacts. Obama delayed the project in 2011 by asking for a more thorough analysis, which the State Department later drafted with help from a former TC Energy consultant. Republican leaders in Congress repeatedly tried to force the pipeline’s approval through legislation, until Indigenous and environmental activists, who put their bodies on the line to prevent crews from cutting trees to make way for the pipeline, celebrated victory with a 2015 veto from President Obama. TC Energy put its federal permit applications on hold.

Then, as one of his first acts in office, President Trump signed an executive order reviving the project (and the Dakota Access Pipeline, which had been similarly stalled by activist pressure), directing the State Department and other federal agencies to speed up their environmental reviews and grant the project permits to cross the Canadian border as well as US lands and waterways. The Rosebud Sioux Tribe and the Fort Belknap Indian Community worked with the Native American Rights Fund to sue the Trump Administration in 2018 for what they call “numerous violations of the law in the Keystone XL pipeline permitting process,” including breaches of the National Environmental Policy Act, which requires that reviews take a “hard look” at environmental impacts. They also alleged violations of treaties in which the federal government promised to care for Native tribes’ ancestral lands.

In the fall of 2018, U.S. District Judge Brian Morris in Montana granted an injunction blocking construction of the pipeline and ruling thatState Department regulators had yet to adequately consider Keystone XL’s potential to cause oil spills and other environmental harms. The injunction was dissolved last June, after President Trump issued a special “presidential permit” for the project that made the State Department’s approval unnecessary. As Caitlin McCoy, a climate law professor at Harvard, has noted, the presidential permit can’t be challenged under NEPA, since the Supreme Court ruled in 1992 that the Administrative Procedures Act, which created the process for challenging statutory compliance, did not apply to the President; a president’s actions may only be reviewed for “constitutionality,” which includes treaty claims.

Last month, Keystone XL was granted some of the final permits it needed from the state of South Dakota, the Department of Interior’s Bureau of Land Management, and the Army Corps of Engineers—and TC Energy now says it will start clearing trees and mowing grass in the pipeline’s right-of-way this March, while constructing “man camps,” where laborers will live while building the pipeline, even sooner.

Those man camps are one of the greatest concerns for Braun and others in Native and non-Native Western communities in the areas where building will happen. “Pipelines don’t bring the best people,” she says. The camps, which will be put up in rural areas with low populations, are known to attract alcohol and drugs, as well as human trafficking. “Should a person want to come in and do harm, it can take 2 or 3 hours for a police officer or ambulance to arrive,” says Braun. “Our rural police departments, on and off reservations, don’t have the resources to contend with a camp town all the sudden springing up.”

The connections between pipeline man camps and sexual violence, particularly against Indigenous women, are well-documented. Detailed reports have shown that the male-dominated camps can become hotbeds for the trafficking and exploitation of Native women. The Sovereign Bodies Institute is tracking 529 cases of missing and murdered Indigenous women in Montana, North Dakota, South Dakota, and Nebraska alone, many of whom went missing near North Dakota’s Bakken oil fields and other pipeline-adjcaent projects in Canada.

Braun is currently working with groups on sparsely populated reservations to create volunteer watch patrols to deter would-be traffickers. At the same time, the Indigenous Environmental Network has launched a new lawsuit against the Trump Administration, alleging that the pipeline poses an existential threat to Indigenous water resources and life-ways, and questioning the President’s authority to unilaterally issue a permit.

“We are united in a collective moment about sovereignty.”

Meanwhile, the Rosebud Sioux and Fort Belknap tribes’ 2018 case is still ongoing, but their strategy has shifted to focus on 19th century treaties between their tribes and the federal government that are supposed to prevent damage to their traditional lands and historic sites. The tribes are arguing that the pipeline would amount to a “depredation” of tribal lands, which the treaties are supposed to protect against.

“These pipelines are just the 21st century version of the wagon trains tribes were concerned about crossing their lands back in the 1860’s,” says Wes Furlong, one of the lawyers in the case who works with the Native American Rights Fund. “Treaty claims allow the tribes to bring a lawsuit directly against the president in a way many environmental groups couldn’t,” he says, adding that NEPA and other statutory concerns can be raised as part of a treaty claim.

In December, Judge Morris in Montana declined to issue a new injunction against the pipeline, saying that the tribes could not make a case for the project causing them “imminent harm,” which is a necessary condition for an injunction. Now, says Furlong, with agencies issuing the final permits and TC Energy poised to break ground, the tribes along with the IEN are likely to ask for a new injunction, and could have a better chance of getting one. Jim McElfish, a senior attorney with the Environmental Law Institute, concurs. “They may now have a basis to go forward,” he says. “And treaty law would probably be enough to justify their likelihood of ultimately prevailing in the lawsuit,” another typical condition for an injunction.

While they believe their case is strong, organizers like Braun aren’t waiting for the courts to stop Keystone XL. Mark Tilsen, an Oglala Lakota poet who led direct actions against the Dakota Access Pipeline on the Standing Rock Indian Reservation, says he’s just one of thousands who are getting ready to fight on the ground again. “Indigenous people are leading the fight on all six continents to fight catastrophic climate change,” he says. “We are united in a collective moment about sovereignty, asserting ourselves on our treaty territory to make our ancestors proud.”

But should Tilsen and other activists go the route of direct action, they’ll have to contend with a spate of anti-protest laws, passed in the three years since the Standing Rock protests and, not coincidentally, in every state in Keystone XL’s immediate pathway. The laws create fines and felonies for those caught “interfering” with the development of oil infrastructure. South Dakota’s especially draconian “riot-boosting” law, which Governor Kristi Noem’s office promoted in 2019 as a “next-generation pipeline funding model,” would have created hefty liabilities for individuals and groups found guilty of so much as supporting a pipeline protest from afar, even on social media. In October, South Dakota agreed not to enforce that law after a judge ruled it unconstitutional. That merely sent Gov. Noem back to the drawing board: this week she went public with her intention to pass a revised version of the law.

Anti-protest statutes are based on fears “that are really unfounded,” says Joye Braun. “The only ones perpetuating violence at Standing Rock were the police and [private security company] TigerSwan. We weren’t the ones breaking people’s arms.”

Tilsen says nobody he knows has expressed feeling deterred by the new, heightened penalties. “No amount of legislation is going to stop people from showing up to resist these pipelines,” he says. “There are things that are legal but also amoral. For the Lakota, and also for the farmers and the ranchers of the Great Plains, fighting for our water is a matter of survival. At Standing Rock, we popularized ‘Mni Wiconi,’ [water is life], but on our prairies it’s a fact and way of life. If I had final parting words for the owners of the Keystone XL pipeline, it’s: We ain’t shook. And we’re waiting.”