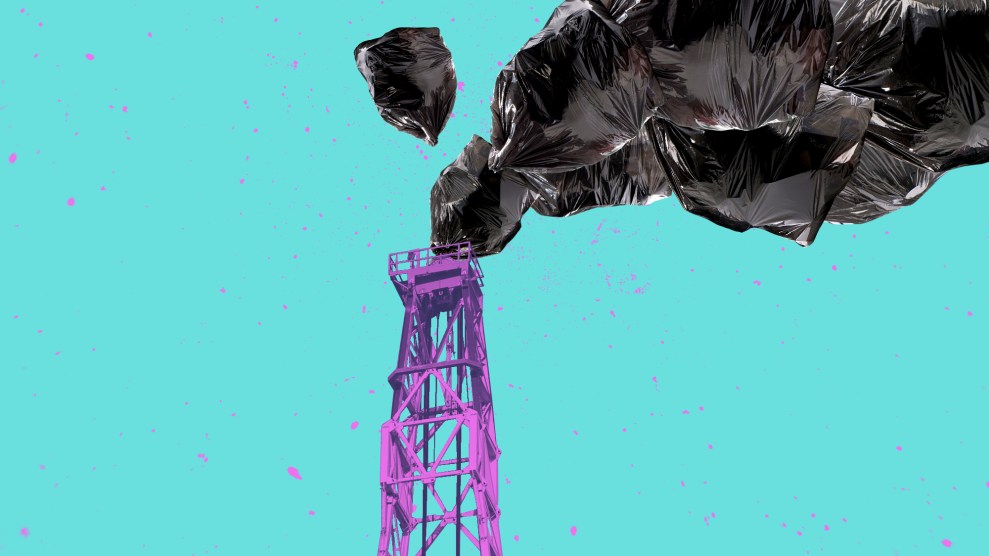 Let’s say you lost your headphones, so you order replacements on Amazon. They arrive in a blue-and-white Amazon-branded plastic envelope. Inside, there’s a clear plastic bag, and inside that, a hard plastic container, and inside that, finally, the headphones themselves, which are mostly plastic.

I know the feeling that comes next: a twinge of guilt about all the unnecessary packaging, because you’ve read how our plastics have been accumulating in landfills, wildlife, and the ocean. Perhaps you’ve vowed to change your plastic-loving ways—maybe by forgoing Amazon orders or bringing your own bags to the grocery store. That’s a good start, but it won’t fix the real reason we’re drowning in a glut of supply. Fossil fuel companies are staring down a time when their signature product will no longer be so critical in our lives. As the world transitions slowly but surely away from fuel-guzzling cars, gas-powered buildings, and coal-fired power plants, industry execs must count on growth that comes from somewhere else—and they see their savior as plastics.

In the last decade, petrochemicals have moved from a sideshow for the oil and gas industry to a major profit machine.

Those plastic-laden headphones are just one of a dizzying array of products made by the petrochemical sector, which uses fossil fuels to produce plastics, fertilizers, detergents, and even the fibers in much of our clothing. In the last decade, petrochemicals have moved from a sideshow for the oil and gas industry to a major profit machine, and the trend is expected to accelerate: The energy research group International Energy Agency predicts that plastics’ consumption of oil will outpace that of cars by 2050. In a recent report about its 20-year growth, ExxonMobil executives assured shareholders that the company could offset losses from the transition to electric cars with growth in petrochemicals. Despite BP’s own pledge to cut its operations’ oil and gas emissions by 2050, the company has a notable carve-out for the oil and gas consumed by its petrochemical production.

A lot of that growth in petrochemicals is happening in the United States. Traditionally, most plastics have come from foreign petroleum. But plastic can also be made from ethane, an abundant byproduct of the gas extracted through fracking. With plenty of ethane flooding the market, the petrochemical industry has raced to build plants, called ethane crackers. Using incredibly high temperatures, these facilities (sometimes fueled by their own dedicated power plants) “crack” the molecular bonds of the ethane to form the building blocks of plastics, such as polyethylene. Since the US market is so saturated with plastics, many of these new facilities export these materials around the world for manufacturing into the products we recognize, from packaging to polyester clothing.

There are climate impacts at every point of the lifecycle of plastics. The production process consumes fossil fuels both to make the plastics and maintain the high temperatures for refining and manufacturing. Methane, which is both a fuel and a potent greenhouse gas, tends to leak during drilling, transport, and refining, making it an underestimated source of pollution from the oil and gas industry. Emerging research has shown how polyethylene releases greenhouse gases when it breaks down and might interfere with the tiny algae plants that play an essential role in helping the oceans absorb excess carbon. Even when recyclable plastics make it to blue bins, much of it ends up in landfills and about 12 percent is burned at an incinerator to generate energy—which vents toxic fumes into nearby communities and more carbon pollution into the atmosphere.

A 2019 report by the Center for International Environmental Law (CIEL) found that emissions from the plastics sector already rose 15 percent from 2012 to 2018. Last year alone, the CIEL, using Environmental Integrity Project data, estimated that plastic production contributed the equivalent of 189 large coal plants.

If plastics production continues apace, the sector is on track to reach the equivalent annual pollution of 295 large coal plants in the next 10 years, and double that by 2050, according to CIEL. An International Energy Agency report from 2018 indicated that carbon pollution from the petrochemical sector is going up 30 percent by 2050 over the sector’s current rate.

The plastics production problem might be new for the general American public, but it isn’t for the communities of color that have long bordered existing plants. Michele Roberts, a coordinator with the Environmental Justice Health Alliance, points out that chemical plants have historically been built in predominantly African American communities living in poverty, like the industrial plants that have lined the Gulf Coast, nicknamed “Cancer Alley.” The new hub of petrochemicals growth has been in both the Gulf and western Pennsylvania. North of Corpus Christi, Texas, ExxonMobil secured hundreds of millions of dollars in tax breaks for a massive planned steam cracker to be built by 2022, located within a mile from a high school and middle school. Texas has seen four major fires at petrochemical plants in the last year alone, forcing tens of thousands of people to evacuate to escape the carcinogenic air. “There’s a whole lifecycle trajectory that today impacts people of color and the poor in a major, disparate way,” Roberts says.

Even as awareness of plastics’ environmental effects has grown, the industry has never done better business. According to the chemicals and fossil fuel lobby American Chemistry Council, 340 chemical industry facilities (a number that includes more than just plastics, like fertilizer) have been announced since 2010. Of those, 190 are already underway, concentrated in fracking boomtowns in western Pennsylvania and along the Gulf Coast. One of the most massive under construction is Shell’s Monaca, Pennsylvania facility, which will be capable of producing 1.6 million metric tons of plastics each year. It will have its own rail system of 3,300 freight cars, capable of producing the equivalent of half a million cars’ worth of carbon pollution and more than a million tons of plastic resins annually, according to the New York Times. Other oil companies have been racing to compete with even bigger deals: Chevron inked a deal last year with Qatar Petroleum for an $8 billion ethane cracker along the Gulf Coast that would pump out 2 million metric tons of ethylene each year—by 2024. And ExxonMobil is building a 1.8 million metric ton ethane steam cracker with a Saudi Arabian company near Houston to be completed by 2022.

Even as awareness of the environmental effects of plastics has grown, the industry has never done better business.

President Trump has publicly celebrated the ascent of plastics. At an official White House event held at the Shell construction site in Monaca, he cheered the plant as a sign of the end of American dependence on foreign oil and gas. “We don’t need it from the Middle East anymore,” he said. He insisted that plastic pollution wasn’t the United States’ problem. “It’s plastic that’s floating over in the ocean and the various oceans from other places” that’s causing pollution, he said. “Plastics are fine, but you have to know what to do with them. But other countries are not taking care of their plastic use and they haven’t for a long time.”

The plastics industry takes that argument a step further, claiming that its wares help us move away from fossil fuels. For example, the American Chemistry Council claims on its website that plastics lighten products, “which means companies can ship more product with less fuel. Plastics used in cars helps make them lighter and more fuel efficient. And from appliances to electronics plastics can help to achieve greater energy efficiency over the course of a product’s life.”

It’s true that plastics can lighten the loads of vehicles and planes, but that isn’t the bulk of the plastics problem. The biggest source for plastics waste, and the fastest-growing problem for oceans and waterways, is the kind we use in clothing and for food packaging and shipping.

Judith Enck, a former EPA northeast regional administrator and founder of the environmental coalition Beyond Plastics, believes that focusing on how plastic makes cars lighter is a distraction. The real problem, she argues, is that the glut of gas has made plastics incredibly cheap, intensifying the world’s growing hunger for more single-use plastics. Ethane crackers are not an offramp from oil, she says—instead, they’re another way of embedding fossil fuels in our daily lives. “Plastics keep us on the fossil fuel treadmill.”