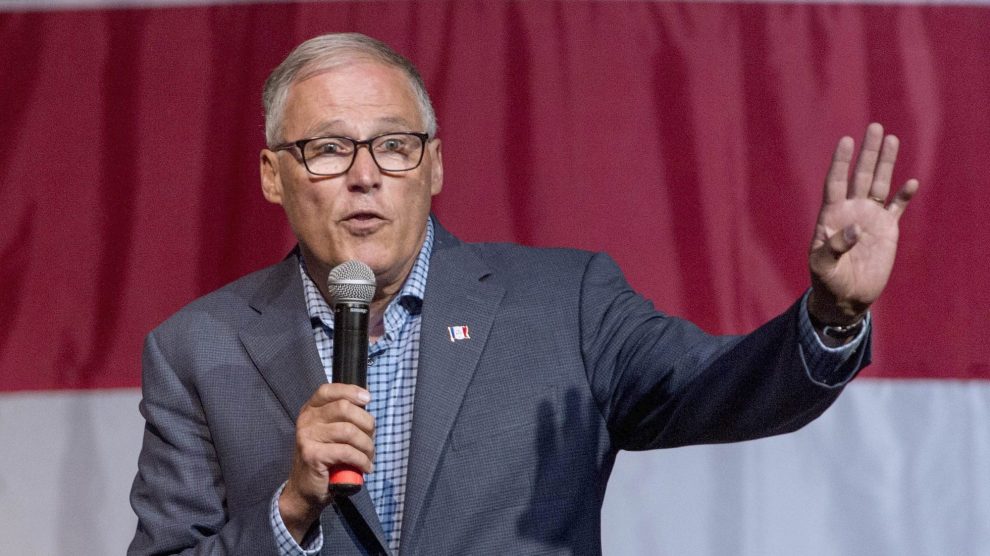 Thirteen hours before Jay Inslee dropped out of the Democratic presidential race last August, his campaign―the first in history to make a serious bid for the White House on climate change alone―rounded out its book-length stack of policy memos with a final 38 pages on rural infrastructure and paying farmers to store carbon dioxide removed from the air.

By the time the Washington governor announced his exit from the race on MSNBC that night, Inslee pointed proudly to a tangible legacy, boasting of having “left an open-source gold standard of what will get us to a cleaner future and really will end our reliance on fossil fuels.”

“It was not just a campaign document, it was a governing document, and it could be used by anyone who ends up in the White House,” Inslee told HuffPost that day in August.

Now a group of his former staffers is getting the band back together to promote an expanded version of that manifesto to candidates as the general election begins and to Democratic leaders as Congress weighs its next bill to curb the economic fallout of the novel coronavirus pandemic.

The new nonprofit named itself Evergreen, after the roughly 200 pages of campaign proposals Inslee dubbed the Evergreen Action Plan, an allusion to Washington’s state nickname. Inslee, gripped by the COVID-19 outbreak in Washington, is not involved in the effort, as he runs for a third term as governor and grapples with flailing efforts to pass new emissions legislation in his state.

But Evergreen is headed by the former staffers credited with authoring much of the campaign’s policy program: Sam Ricketts, who went on to join the Center for American Progress as a senior fellow; Bracken Hendricks, a long-time Inslee adviser; and Maggie Thomas, who until recently worked for Elizabeth Warren’s presidential campaign.

“What we need in climate policy, if we want to redefine what the solution is, is details and substantive plans,” said Leah Stokes, a climate policy expert and assistant professor at the University of California, Santa Barbara, who has been advising Evergreen. “These are people who’ve been working on this issue for decades.”

The nonprofit joins a growing roster of groups jockeying to shape climate policy in the critical next few years that could determine how catastrophic warming becomes in the decades ahead.

In November, former Secretary of State John Kerry launched a new star-studded campaign to push for climate action, though the initiative forwent serious policy proposals in favor of pitching a tent big enough to welcome fossil fuel allies. Last month, the progressive Roosevelt Institute announced a new Climate and Economic Transformation program. This week, Data for Progress, the left-leaning think tank and polling operation that drafted one of the first Green New Deal blueprints, added a new deputy to its climate team.

There are less formal efforts, too. Last month, a group of former campaign staffers who advised Inslee, Warren and Sen. Bernie Sanders (I-Vt.) published a lengthy open letter to Congress calling for a bailout for public transit systems, a rapid drilling phaseout and the passage of existing Green New Deal proposals as part of the federal stimulus legislation to blunt the effects of the pandemic.

But Evergreen is targeting Democrats’ top brass, hoping to leverage the goodwill Inslee’s campaign garnered from both the establishment and progressive wings of the party to unite warring factions behind an ambitious, if markedly technocratic, approach.

On Tuesday evening, the group made a soft debut, sending its new 85-page memo to presumptive Democratic presidential nominee Joe Biden’s campaign and to party leaders in the House and Senate. On Wednesday morning, the group planned to loop in several hundred climate activists and policy experts.

The meat of the plan is a refurbished version of the campaign documents Inslee released during his six months in the primary race. That includes a regulatory roadmap to completely phase out fossil fuel production, a blueprint for a Climate Conservation Corps and a plan to wield the federal government’s buying power to boost the clean energy sector and restore the labor movement to its mid-20th-century might.

But Evergreen goes beyond what the Inslee campaign produced. The memo includes a novel section calling for the establishment of a new White House Office of Climate Mobilization, based on the World War II-era Office of War Mobilization, with a network of chapters in each state. It explicitly advocates revising the carbon-capture technology sector’s lone existing federal tax credit to discourage its use by oil drillers. The proposal also adopts the Warren campaign’s sweeping Blue New Deal proposal to regulate fisheries, spur new aquaculture markets and curb the impact of climate change on oceans.

Evergreen declined to name its exact funders, but a spokesman said it included “multiple environmental foundations.” Its formal launch, slated for later this year, comes as the Democratic Party seeks to unite its base ahead of what’s expected to be a difficult campaign against President Donald Trump, whose approval rating has climbed despite a bungled response to the pandemic and the unprecedented wave of job losses it induced.

But the urgency of dealing with climate change, a crisis that requires a response similar to the pandemic, could persuade reluctant voters to back Biden in a bid to unseat Trump, a fossil fuel hardliner who’s scheduled to withdraw the United States from the Paris climate accords the day after the November election. In a sign of the election’s global stakes, China, the world’s largest emitter, signaled this week it may postpone submitting its climate plan to the United Nations until after votes are cast.Biden’s record of support for the 2003 Iraq invasion, opposition to universal health care and deep ties to the fossil fuel industry makes him a difficult sell to progressives whose calls for dramatic expansions of the social safety net look less radical by the day as the pandemic spreads. Indeed, Inslee himself sparred with Biden on the debate stage last year.

The former vice president’s $1.7 trillion proposal to lower emissions paled in comparison to what Inslee, Warren or Sanders, whose $16 trillion Green New Deal marked easily the most ambitious plan of the race, proposed. Still, during the Super Tuesday blitz that all but secured Biden the nomination, one exit poll found 34 percent of voters who cited climate change as their top concern voted for the former vice president, compared to 28 percent who cast ballots for Sanders.

“It’s smart, politically,” Stokes said. “And it’s also at the scale of the problem.”