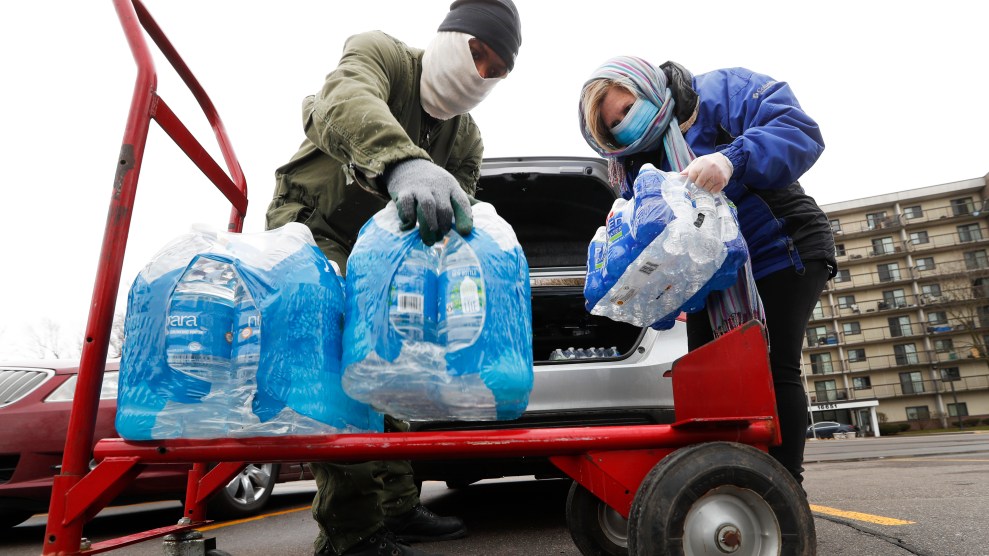 In late March, Monica Lewis-Patrick pulled her brown Toyota up to the curb outside a duplex in Detroit’s Brightmoor neighborhood, her backseat and passenger side filled with water bottles. The family of 16 inside the duplex had been living without running water for months after the city cut off their service. As the coronavirus spread, they had no way to wash their hands. Lewis-Patrick, an activist who runs a free water delivery service, helped unload her supply onto the front porch. It wasn’t enough for the family to bathe in, but they could use it to cook and flush their toilets and wash their hands for a few days.

When US health officials began urging people to wash their hands more in February as a precaution against the coronavirus, Detroit knew it had a problem: Since 2014, its water department had shut off service for about 141,000 accounts—cutting off tens of thousands of households that couldn’t pay their bills, in a city where nearly 4 in 10 people live in poverty. Many shutoffs were in Brightmoor, a working-class neighborhood, and other parts of the city’s northwest.

“How on God’s green Earth are we in the middle of a pandemic, now deciding it’s still okay to deny American citizens access to the human right to water and sanitation?”

In March, as the coronavirus spread, Michigan Gov. Gretchen Whitmer announced a moratorium on shutoffs and ordered Detroit and other towns to restore water service to people without it. Officials at the city’s water department now say they’re almost done with that job. But advocates at food pantries and nonprofits that deliver water to families in Detroit say many hundreds or even thousands of residents likely still lack running taps, even as the city has emerged as a hot spot for the virus.

“How on God’s green Earth are we in the middle of a pandemic, now deciding it’s still okay to deny American citizens access to the human right to water and sanitation?” Lewis-Patrick says.

The Rev. Roslyn Bouier runs a food pantry in Brightmoor that hands out crates of water along with food. “Because people are forced to be home now, there’s a tremendous need,” she told me Monday on her drive home after hours of loading cars.

Many tens of thousands of people in Detroit learned to live through water shutoffs in recent years, but the pandemic has made their predicament far more dire. Previously, kids could at least go to the bathroom and wash their faces in school, and their parents could do so at work. Now they have to shelter in place. Hand sanitizer isn’t usually an option, since it’s so hard to find. “People are buying up all the alcohol and Clorox wipes because they don’t have the ability to use soap and water,” Lewis-Patrick says. In homes without running taps, it can be difficult for parents to make formula for their babies, or for people with diabetes to cook and maintain a proper diet, putting their health further at risk. Unable to flush toilets, some people must throw their excrement in the trash after going to the bathroom, which is disconcerting enough on its own, even before you consider that the coronavirus can be present in a person’s feces.

Lewis-Patrick, along with other members of her organization We the People of Detroit, delivers crates of water to hundreds of homes without service, and teaches families how to ration it. The lesson can be grim: If they boil water to cook spaghetti for their kids, she tells them to pour that water into the sink afterward and reuse it to wash the dishes. Then they should put it in a bucket and save it for later, to flush the toilet. When the kids brush their teeth, they should spit into a bucket, too. Families sometimes collect rainwater, or fill buckets at relatives’ houses.

It’s unclear exactly how many people around the country are living through stay-at-home orders without running water. In 2016, a national survey found that an estimated 15 million Americans had experienced a water shutoff that year, especially in low-income communities of color. In 2017, Michigan State University researchers concluded that water bills were potentially unaffordable for 12 percent of households nationwide.

A 2017 study concluded that water bills were potentially unaffordable for 12 percent of households nationwide.

During the pandemic, about 32 states and DC have declared partial or full moratoriums on shutoffs, according to Food & Water Watch, a nonprofit. In March, House Democrats proposed banning the practice nationwide as part of the coronavirus stimulus bill, but the measure did not make it into the final CARES Act; Rep. Rashida Tlaib, whose district includes part of Detroit, co-introduced another bill that would require water service restored to those without it. According to Food & Water Watch, only Michigan, four other states, and DC have ordered cities to get pipes flowing again during the pandemic.

While dry taps are a problem for low-income families around the country, perhaps no city has been as aggressive with shutoffs as Detroit, which ramped up service disconnections in 2014 while recovering from a municipal bankruptcy. As rates continued to increase, nearly a third of households weren’t paying their bills. Tens of thousands of homes lost water service that year, and thirsty kids began showing up to the Brightmoor pantry carrying empty pitchers. United Nations investigators who visited the city said the scale of shutoffs was “unprecedented” and “contrary to human rights,” and that it disproportionately harmed Black residents. But the shutoffs continued. In 2019, the city disconnected more than 23,000 households, a 44 percent increase from a year earlier, according to Bridge magazine, citing city records it obtained in a public records request. As of mid-January, more than 9,000 of those homes still did not have service, the records showed.

City officials say a large majority of the 9,000 homes were actually unoccupied, or occupied by people who already had service. In total, they say, only 1,205 households required a service restoration, and that all but 70 of those restorations have now been completed.

But advocates like Lewis-Patrick aren’t buying this claim. She argues that at the very least, judging by the number of people who continue to seek water from her organization and at food pantries, hundreds of people still don’t have service, though she suspects even more than that are going without it.

Advocacy groups doubt the city’s conclusion that so many homes are empty. “In Detroit, a lot of homes can look abandoned that are occupied,” says Nick Leonard, executive director of the Great Lakes Environmental Law Center, which helped file a petition last year urging the city to end shutoffs. People without water service who owe money and live in poor conditions “are not necessarily going to answer the door when some official comes knocking,” adds Mark Fancher, an attorney at the ACLU of Michigan, which joined the petition. When calculating how many people still need help, “the mayor continues to lowball” it, says Lewis-Patrick.

A spokesperson for the water department said the city determined the number of unoccupied homes by sending door-knockers to nearly 9,000 residences whose service had been disconnected. Vaughn Arrington, whose company, Human Fliers, did the door-knocking, says that if nobody answered the door, his employees would leave information and a phone number to call for service restoration.

But advocacy groups point out that some people in these homes may be so poor they don’t have a phone, or enough minutes to call. They may be wary about signing up for water service now—because while the city is reducing the cost to reconnect, it’s still not free: Residents must pay a $25 fee, plus $25 per month for water during the pandemic. After the pandemic ends, they will be responsible for paying back the rest of the water bill and any debt, which can be daunting even with help from the city’s payment assistance plans.

Lewis-Patrick wonders why the city waited for a deadly virus before intervening to help people without water. For years, she and other advocates have argued that the shutoffs threatened the health of impoverished families, something city officials denied. “[T]here is no clear data to suggest whether or not there are other health risks related to water service interruptions,” Denise Fair, Detroit’s chief public health officer, wrote to Bridge in February.

“There’s no public emergency unless it expands beyond the confines of communities of color. That is highly disturbing.”

It was only the next month, as the coronavirus spread, that the state concluded shutoffs were contrary to public health. “There’s no public emergency unless it expands beyond the confines of communities of color,” says ACLU’s Fancher. “That is highly disturbing.”

Black people are bearing the brunt of the pandemic elsewhere, too. They make up about 14 percent of the population in Michigan, but a staggering 40 percent of the state’s 3,085 coronavirus deaths so far. As of early April, Detroit, where 79 percent of residents are Black, had a higher death rate from the virus than even New York City. Most of the deaths have been in the districts where Brightmoor and other neighborhoods heavily affected by shutoffs are located.

The stress of the pandemic weighs on Lewis-Patrick. Her daughter became a nurse a year ago, and the hospital where she works is facing mask shortages. It’s exhausting “trying to get her food and then running back across town to deliver water to neighbors,” says Lewis-Patrick, but she has no plans to end her delivery route. “I tell my children, if there’s any issue that I’ll die on, it’ll be the human right to water.”