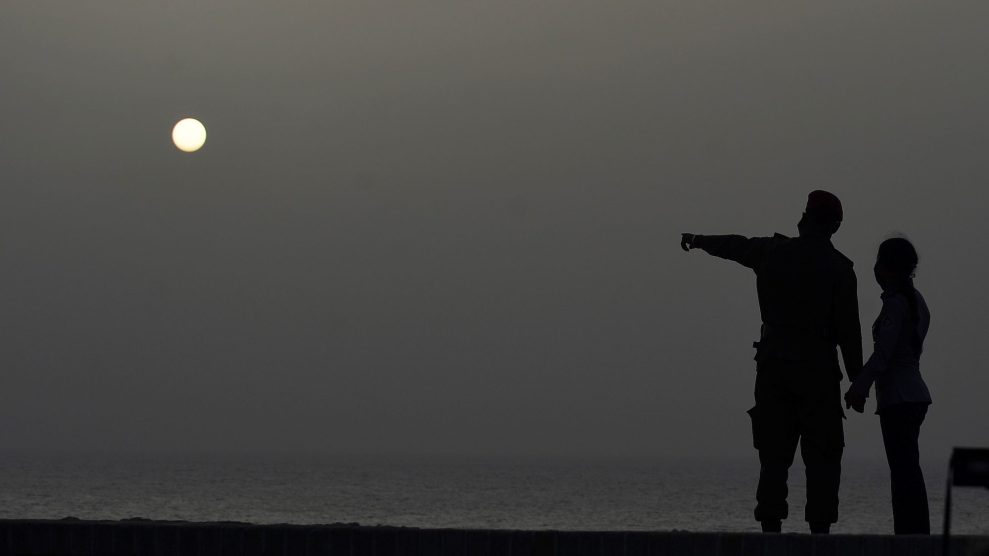 A couple look at the sea as a vast cloud of Sahara dust is blanketing the city of Havana on June 24, 2020.Yamil Lage/Getty

This piece was originally published in Slate and appears here as part of our Climate Desk Partnership.

In what appears to be the latest biblical plague of 2020, a nearly 4,000-mile-long dust storm from the Sahara Desert is currently headed toward the southeastern coast of the United States.

#SATELLITE SPOTLIGHT: This #SaharanAirLayer (#SAL) tracking animation shows how the plume of #dust and #sand from the #SaharaDesert has moved westward over the last 5 days. Areas of red and pink represent the dry, dusty air as seen from @NOAA's #GOES16 🛰️ pic.twitter.com/mh7gULXFSU

This dust plume, known as the Saharan Air Layer, is a phenomenon that develops every year off the coast of Africa, where powerful winds from thunderstorms over the Sahel can push the dust many thousands of feet up into the atmosphere. A few times a year, that layer of dust sends out vast clouds that then drift over the sea.

But this year, the dust clouds that normally do little more than amplify sunsets have drifted far lower to coat Caribbean islands with a thin layer of dust and choke the air with a dry haze that in some places cut visibility by more than half. The cloud is forecast to sweep across the southeastern United States—Texas and Louisiana in particular—on Wednesday, Thursday, and Friday. Another wave of dust is expected to follow.

A large plume of Saharan dust can be seen on GOES-East satellite imagery this morning across the eastern tropical Atlantic. pic.twitter.com/fZ7WxN4XfS

According to the New York Times, in those areas affected by the dust, some people with asthma and underlying lung conditions might be at risk for irritation and discomfort. Those residents should avoid outdoor activities and monitor the air quality.

We are certainly familiar with the big dust storms we can see here in the Desert SW during the monsoon and how far the dust can travel across the region, but certainly not this far. Satellite from earlier today shows a large Saharan Air Layer traversing the Atlantic. #azwx #cawx pic.twitter.com/WOLoxxrFR9

One good quality of these plumes is that they typically squash any early hurricane formations with their dry air. But according to the Washington Post, the dust can also deposit enough iron into the Gulf of Mexico to spur dangerous and noxious algal blooms. It’s also possible some of the microbes and nutrients carried in the dust play an important role in local ecosystems.

We flew over this Saharan dust plume today in the west central Atlantic. Amazing how large an area it covers! pic.twitter.com/JVGyo8LAXI