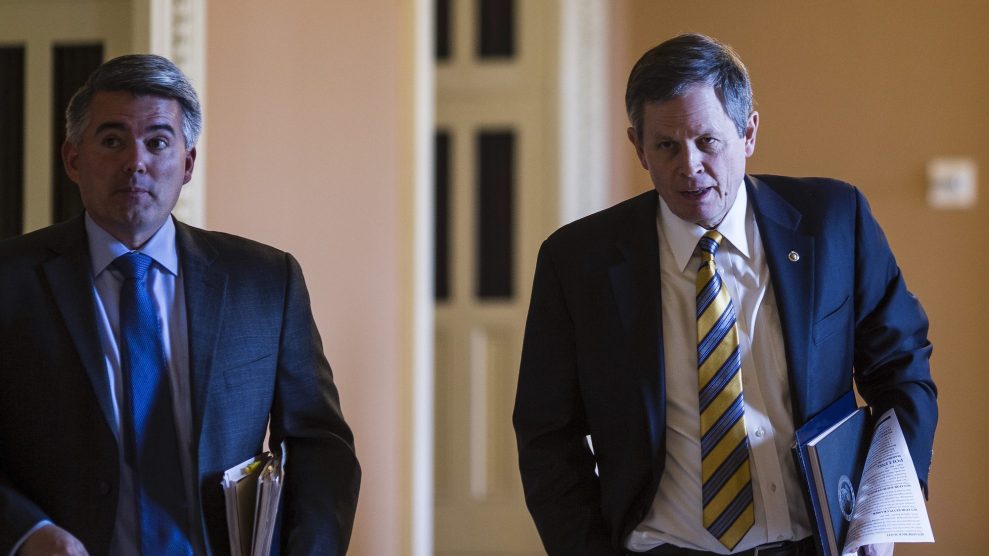 Public lands activists and a handful of lawmakers have long pushed for full, permanent funding of the Land and Water Conservation Fund, a federal program established in 1964 that uses offshore oil and gas revenues to establish and protect parks, wildlife refuges, forests and wildlife habitat.

But anti-federal-land conservatives, appalled at the thought of more money being used to expand and improve the federal estate, have always stood in the way. The program has been funded at the full $900 million allowed by law only twice in its history.

Now two vulnerable Republicans are among those championing a bipartisan conservation bill that would permanently and fully fund the LWCF, as well as allocate $9.5 billion to address the mounting maintenance backlog at America’s national parks. Sens. Steve Daines (R-Mont.) and Cory Gardner (R-Colo.), co-sponsors of the bill, are claiming credit for the win after the bill advanced by an 80-17 vote this week. A vote on final passage is expected early next week.

“We are on the cusp of passing the most historic conservation legislation in 50 years,” Daines said during a Tuesday news conference on Capitol Hill. “And isn’t it ironic that it will take public lands to bring a divided government and a divided nation together.”

“Isn’t it ironic that it will take public lands to bring a divided government and a divided nation together.”

In March, Daines and Gardner announced they had secured an about-face from President Donald Trump, a longtime foe of the LWCF who has worked to weaken safeguards for nearly 35 million federal acres. The Trump administration’s budget proposal for 2020 called for all but eliminating funding for the LWCF, from $156 million down to just $7.6 million.

During a meeting at the White House in February, Gardner told Trump that passing a public lands bill would be the biggest conservation win since President Theodore Roosevelt established national parks, refuges and forests across the country in the early 1900s, The New York Times reported this week. Invoking Roosevelt was apparently all it took to get the president to change his stance. Trump’s Interior Department has said it is creating “a conservation stewardship legacy second only to Teddy Roosevelt;” a bold claim that simply does not match reality.

Trump has not been shy about who he thinks should get credit for this moment.

“I am calling on Congress to send me a Bill that fully and permanently funds the LWCF and restores our National Parks,” Trump wrote in a March post to Twitter. “When I sign it into law, it will be HISTORIC for our beautiful public lands. ALL thanks to @SenCoryGardner and @SteveDaines, two GREAT Conservative Leaders!”

It’s a message he and his team are sure to push between now and November.

As someone who grew up in Rifle Colorado, thank you @SenCoryGardner for your leadership and unwavering support of our public lands and national parks! pic.twitter.com/vLJWPfzP2H

‘These victories did not happen magically overnight’

Both Daines and Gardner are relatively new to the fight to protect the LWCF, and neither have particularly notable environmental records―earning lifetime scores from the League of Conservation Voters of 6 percent and 11 percent, respectively.

Gardner, while a member of the House of Representatives in 2011, voted in favor of an amendment to an appropriations bill that would have drastically cut the LWCF’s already low funding. In 2015, Daines voted against reauthorizing the program. And in June 2018, hours after participating in a press conference calling for full and permanent LWCF funding, they both voted in favor of a spending cuts package that, among other things, would have slashed $16 million in LWCF funds from the US Forest Service.

Environmentalists and public lands advocates have applauded the two lawmakers’ recent work on the LWCF and embraced the opportunity to secure permanent program funding, but it’s hard not to see Trump’s newfound support as little more than a gift to two Senate allies facing tough bids for reelection. Daines is facing Montana’s Democratic governor and former 2020 presidential candidate Steve Bullock, and Gardner is likely to square off against former Colorado governor and 2020 presidential contender John Hickenlooper. Roll Call named Gardner the most vulnerable Republican senator in 2020.

“It is a desperate attempt to convince their constituents that they aren’t working on behalf of corporations and that they care about what the American people care about.”

“It is a desperate attempt to convince their constituents that they aren’t working on behalf of corporations and that they care about what the American people care about,” said Jayson O’Neill, director of public lands watchdog group Western Values Project.

The oil and gas sector has been a top-five contributing industry to both Daines and Gardner over their careers, according to Center for Responsive Politics data.

In a Tuesday speech on the Senate floor, Sen. John Tester (D-Mont.) called the LWCF “the most important conservation tool we have at the federal level” and a key driver of Montana’s ballooning outdoor recreation economy. He also emphasized that he and others―groups like Montana Trout Unlimited and Backcountry Hunters and Anglers, and Sens. Michael Bennet (D-Colo.), Richard Burr (R-N.C.), Maria Cantwell (D-Wash.) and Ron Wyden (D-Ore.)―have been fighting for more than a decade to secure full, permanent funding.

“These victories did not happen magically overnight,” he said. “The fact is we worked long and hard with local conservation groups and public land enthusiasts around the country to build support where it never existed before. And our years of work finally broke the dam earlier this year when President Trump and Sen. McConnell reversed their opposition to this legislation because of overwhelming bipartisan momentum that we built on the ground. I welcome their change of heart.”

Sen. Tom Udall (D-N.M.), another longtime champion of the LWCF, told HuffPost this week that many people were surprised by Trump’s sudden reversal. “But I say let’s seize this opportunity―this is a historic chance to realize the vision of the LWCF, and we should take it,” he said in an email.

Udall added that the LWCF was a bipartisan creation―his father, former Interior Secretary Stewart Udall, played a large role in establishing the program―and he’s excited to see bipartisan support for it so many years later.

“There will be a time and a place for politics and campaigning soon enough,” he said. “We will keep having the conversation about the administration’s unending attacks on conservation, our public lands and the environment more broadly. But right now, let’s just get this done for the American people.”

Efforts to boost fossil fuel extraction, mining and other development have dominated the Trump administration’s public lands policy, often to the detriment of conservation.

The administration has led the largest rollback of national monuments in US history, carving out more than 2 million acres from a pair of protected national monuments in Utah, and last week opening a 5,000-square-mile marine sanctuary off the East Coast to commercial fishing. It has weakened key conservation laws that protect land, water and air, including the Endangered Species Act and the National Environmental Policy Act. And it has repeatedly hosted anti-federal-land advocates and even tapped fierce critics of federal land management for powerful government posts.

Supporting Trump and his anti-conservation agenda at seemingly every turn have been Gardner and Daines. Daines even signaled he’d back William Perry Pendley, the acting director of the Bureau of Land Management who has extreme anti-environmental views and spent his career lobbying for the sale of federal lands, if Trump were to officially nominate him for the post. Gardner has so far avoided taking a stand on Pendley, but touted his relationship with Trump and his own role in the administration’s controversial decision to move BLM headquarters to Colorado.

“These things happen because President Trump and I work together for Colorado,” Gardner said at a Trump rally in February in Colorado Springs.

“These things happen because President Trump and I work together for Colorado.”

Protecting public lands and maintaining them under federal control has proven to be a winning platform in Western states. Likewise, the LWCF is extremely popular―74 percent of Americans support fully funding the program, according to a 2018 poll by the National Wildlife Federation.

Daines and Gardner appear to have realized that they need a conservation victory to point to going into the 2020 election. It remains to be seen if this will give them the boost they need to secure another term.

Jessica Goad, deputy director of Conservation Colorado, said she is “thrilled” about the public lands bill and Gardner and Daines deserve credit. But she stressed that environmental leadership requires far more than supporting the LWCF, noting that Gardner has yet to back the Colorado Outdoor Recreation and Economy Act, or CORE Act, which would protect approximately 400,000 acres of public land in the state. An analysis by her group last year found that Gardner has voted against the environment 85 percent of the time since he became a senator.

“Colorado voters are really smart,” Goad said. “They are well-informed on the environment, and I think passing LWCF is just the start for voters.”

In an interview with E&E News this week, a spokeswoman for Gardner’s campaign accused Democrats of being “more interested in playing politics than protecting public lands” and of attempting to “distract from the fact that Gardner accomplished something they failed to do for decades.”