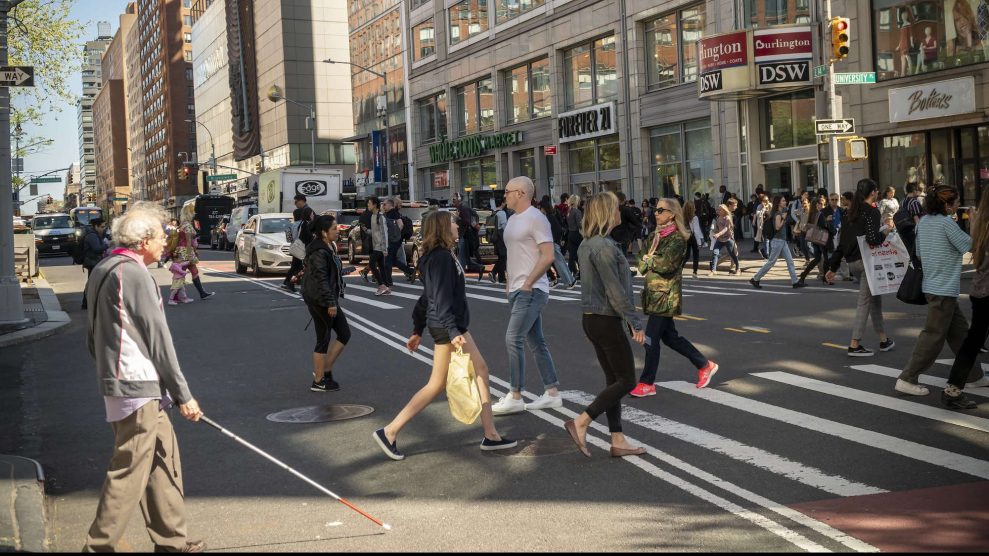 As the coronavirus pandemic has unfolded, Planet Earth has gotten a taste of what the world might be like without humans. Greenhouse gas emissions have dropped, for one. Normally shy wildlife have taken to the streets. And the Earth itself isn’t shaking so damn much.

Writing today in the journal Science, dozens of researchers from around the world show that the seismic activity from our civilization plummeted as lockdowns went into effect. This “anthropogenic seismic noise,” as seismologists call it, comes from all manner of human activities, whether that’s running factories, operating cars or trains, or even holding concerts. Seismometers pick up these activities as a kind of constant din, which actually peaks on weekdays, when more people are moving around, and falls on weekends when economies slow down. All this activity that seismometers detect mixes with the natural rumbles that scientists are really interested in, like earthquakes, volcanoes, and landslides.

But boy, are they interested in the anthropogenic seismic noise now—or the lack thereof, as humans began to shelter in place. “We see it effectively moving around the globe as a seismic lockdown wave,” says Royal Holloway University of London seismologist Paula Koelemeijer, one of the paper’s coauthors. “So starting in China originally, then in different places in Italy, and then going through Europe. And whenever lockdowns happened in different countries, we see the effect that’s up to an 80 percent reduction in the amplitude of the seismic noise in some places.” The average was about 50 percent.

“We see it effectively moving around the globe as a seismic lockdown wave.”

Scientists can actually marry seismic data with human activity above ground. During the 2011 Rugby World Cup, for instance, some 25 meters underneath New Zealand’s Eden Park stadium, a seismometer was detecting the rowdiness of the crowd. “You could look at the signal and trace the noise with what was happening during the game,” says University of Auckland geotechnical engineer Liam Wotherspoon, who wasn’t involved in this new research. “So there were spikes when a try was scored, spikes at the end of the game when New Zealand won, and spikes during the trophy ceremony.”

“We’re monitoring stuff all the time, which most people don’t know about,” he adds. “We don’t realize that we’re walking around and the ground is vibrating all the time.”

So how do you tell anthropogenic seismic noise from the good stuff, like the rattle of earthquakes? It’s all about the frequencies. “Earthquakes are often really lower frequencies than the seismic signals from human activities,” says Koelemeijer. “Here we’re looking at 4 to 14 hertz, roughly. Whereas for earthquakes, it depends on how far and how large, but it’s often much longer periods at lower frequencies up to 1 or 2 hertz.”

Animals, too, make their own seismic signals. Koelemeijer has studied how elephants do it, for instance—the outsized creatures communicate from over a mile away with vocalized rumbles sent through the ground. That signal might intermix with the noise from earthquakes and landslides, which Koelemeijer has to correct for in her observations. “If I’m interested in animals, I’ll cut out any time window where an earthquake has occurred,” she says. “But if I’m interested in looking at the earthquakes, I’ll cut out all the other time windows.”

What Koelemeijer and her colleagues witnessed during lockdown was essentially the Great Cutting-Out of Anthropogenic Seismic Noise. They used data collected by 268 seismic stations all over the world, and they found that noise reduction was particularly dramatic on the university campuses equipped with these instruments, because here human activity had virtually ceased. In general, the more densely populated the area, the stronger the effect.

Normally, seismologists don’t bother monitoring urban environments for just this reason: There’s way too much noise muddying the signals of Earth’s natural processes. But for the past few years, citizen scientists have been collecting signals thanks to a clever little device called the Raspberry Shake, a Raspberry Pi computer outfitted with sensors to create an internet-connected seismometer. “Those instruments have been popping up more and more in people’s homes,” says Koelemeijer. “And so about 40 percent of our data stations that we looked at have been these citizen science instruments. It’s just people finding it funny, geeky, to have one of them. Like, I’m one of those people. I have one in my house.”

“I can pick up whenever everyone in the street was doing their washing,” she adds. “When the washing machine spins up, you see the frequencies ramp up basically. So you can see all kinds of these vibrations in our seismic data.”

But it was in a remote part of Germany where seismologists recorded perhaps the most surprising lockdown data. The Black Forest Observatory is not only isolated, and thus considered to be a reference low-noise laboratory, but its instruments are stowed over 150 meters below the surface, in bedrock. Yet they, too, picked up a small noise reduction at night during the lockdown. “Germany was a big surprise for us, because that station is very much a remote station, and seen as a very good seismic station for looking at natural signals,” says Koelemeijer. “So the fact that we saw it there was quite remarkable.”

As devastating as this pandemic has been, in a way it’s given researchers unprecedented opportunities for studies. One group of ecologists has termed this era the Anthropause: Never before have they been able to observe how wildlife reacts to the absence of humans.

Similarly, seismologists are using the lockdown to explore the complexities of anthropogenic seismic noise. Now that nations are lifting restrictions, certain activities are coming back online—more trains are running, heavy industries are restarting, cars are zooming around cities. As all of those activities spin up one by one, seismologists can watch how the data changes. “In the same way when you’re trying to figure out what you might be allergic to in terms of a food allergy, you often have to cut out everything at once and slowly reintroduce things to try and figure out what your body is responding to,” says Koelemeijer.

By getting better at spotting the different sources of anthropogenic seismic noise, they can get better at isolating it from the rattle of earthquakes and other natural phenomena. So say a particular area has been rumbling with smaller, magnitude 3 shakers, but human activity is muddying that signal. “If we’re not picking up the magnitude 3’s, we also don’t know the potential for a magnitude 4 earthquake,” says Koelemeijer. “Knowing how many smaller earthquakes you have of a particular magnitude helps you understand how many larger ones you expect.”

Take Auckland, New Zealand, as an example. A million and a half people live on top of a volcanic field, but researchers have to bury their seismometers hundreds of meters deep to try to get away from the anthropogenic noise above. “Being able to compare data in Auckland before lockdown with data recorded during lockdown will help us better characterize the noise in Auckland, and thus help us to more readily detect any ‘real’ volcanic earthquakes, should they occur,” writes Jan Lindsay, who studies volcanic hazards at the University of Auckland, in an email to Wired. (She wasn’t involved in this research.) “In theory this could provide critical extra warning time in the lead-up to a future eruption.”

Until now, Lindsay and other researchers have had trouble quantifying anthropogenic noise, since it’s constant, save for those slight dips during weekends. “It is truly exciting to see seismologists from all over the world maximize this once-in-a-lifetime opportunity to quantify anthropogenic noise (and the background seismic signals it has been hiding) by sharing their seismic data from the Covid lockdown period,” Lindsay writes.

“This is likely to become a landmark article in the fields of seismic monitoring and ambient noise tomography,” she adds, “so important that the ‘2020 seismic noise quiet period’ will likely become something that earth science students of the future will learn about in textbooks!”