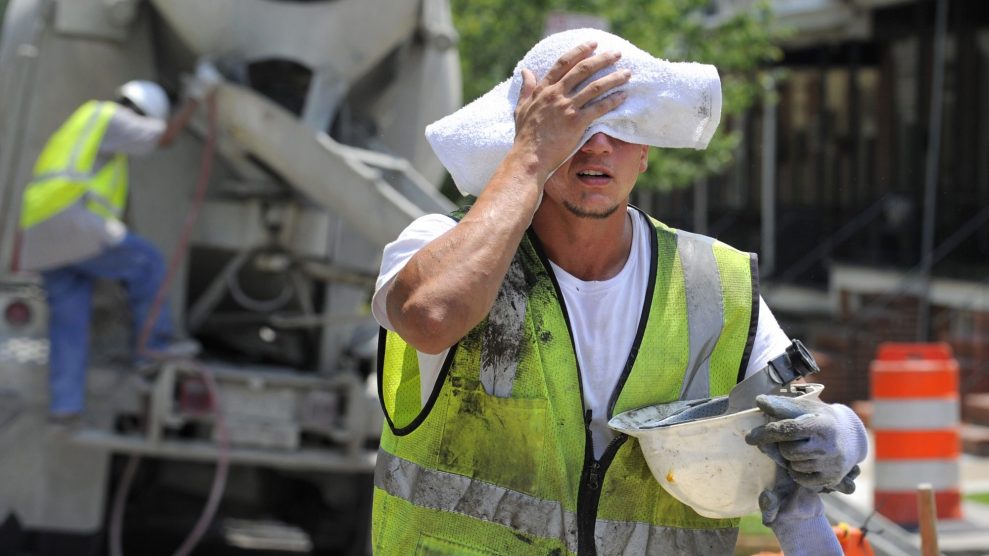 A perfect storm of crises is forming across the United States. Above our heads, a “heat dome” of high pressure could blast 80 percent of the continental US with temperatures over 90 degrees for the next few weeks. This coming in a summer when the Covid-19 lockdown has trapped people indoors, many without air-conditioning—and mass unemployment may mean that residents with AC units can’t afford to run them. Deeper still, the heat and the pandemic are exacerbating long-standing and deadly inequities that will only get deadlier this summer.

A heat dome “is really just sort of a colloquial term for a persistent and/or strong high-pressure system that occurs during the warm season, with the end result being a lot of heat,” says climate scientist Daniel Swain of UCLA’s Institute of the Environment and Sustainability.

That high-pressure air descends from above and gets compressed as it nears the ground. Think about how much more pressure you experience at sea level than at the top of a mountain—what you’re feeling is the weight of the atmosphere on your shoulders. As the air descends and gets compressed, it heats up. “So the same air that’s maybe 80 degrees a few thousand feet up, you bring that same air—without adding any extra energy to it—down to the surface in a high-pressure system and it could be 90, 95, 100 degrees,” says Swain.

At the same time, a high-pressure system keeps clouds from forming by inhibiting upward vertical motion in the atmosphere. Oddly enough, it’s this same phenomenon that produces extremely cold temperatures in the winter. “If you don’t have that upward vertical motion, you don’t get clouds or storms,” Swain says. “So when it’s already cold and dark, that means the temperatures can get really cold because of clear skies, as things radiate out at night. In the warm season, that lack of clouds and lack of upward motion in the atmosphere means it can get really hot because you have a lot of sunlight.”

That heat can accumulate over days or weeks, turning the heat dome into a kind of self-perpetuating atmospheric cap over the landscape. On a normal day, some of the sun’s energy evaporates water from the soil, meaning that solar energy isn’t put toward further warming the air. But as the heat dome persists, it blasts away the soil’s moisture, and that solar energy now goes full-tilt into heating the air.

“So after a certain point, once it’s been hot enough for long enough, it becomes even easier to get even hotter,” says Swain. “And so that’s why these things can often be really persistent, because once they’ve been around for a little while, they start to feed off of themselves.”

Unfortunately for the southwestern US, this is likely to unfold in the next week or two. Normally at this time of year, monsoons would be drenching the landscape, but no such storms are on the horizon. “And so those super dry land surfaces are going to amplify the heat and the persistence of this heat dome,” says Swain. The central US and mountain states will also be sweltering particularly badly over the next few weeks—heat domes tend to perpetuate inland, where they more easily dry out the surface than in wetter regions—though over three-quarters of the Lower 48 will be under the dome’s influence.

This won’t be the last heat dome, or the most severe one. On a warming planet, the conditions are ripe for these systems to perpetuate themselves. Harsher droughts mean ever-drier soils, so when future heat domes settle over the US, they’ll start from the beginning with more solar energy heating the air instead of the wet ground. And thanks to climate change, those air temperatures will be hotter even before a heat dome arrives.

For many vulnerable Americans, that climactic hellscape isn’t approaching—it’s already here, and it’s colliding with the Covid-19 pandemic. Cooling centers, where folks without air-conditioning can go to chill, are shuttered. Public pools, too. And wandering malls is certainly out of the question. Skyrocketing evictions could mean more people are forced onto the street, completely exposed to the heat. Even among those who do have an air conditioner at home, people may have lost their jobs thanks to the Covid-19 economic slump and now can’t afford to pay their utility bills.

“Already, we knew before Covid that one in three American households was struggling to pay their energy bills,” says Chandra Farley, director of the Just Energy program at the Partnership for Southern Equity, which promotes policies and institutional actions that advance racial equity. “We knew folks were already keeping their homes at uncomfortable temperatures for fear of running up their bills.”

The heat assault on lower-income households is twofold. For one, these residents spend a much bigger fraction of their income on energy bills than the rich do, a phenomenon known as the energy burden. And two, low-income neighborhoods are actually hotter than high-income ones all across the US, according to a 2019 joint analysis by National Public Radio and the University of Maryland’s Howard Center for Investigative Journalism. That’s because the suburbs are dotted with single-family homes separated by lots of greenery, which provides shade and cools the air via the evaporation of water from leaves. Urban neighborhoods tend to turn into “heat islands,” absorbing the sun’s energy during the day and slowly releasing it at night.

“Low-income groups and communities of color are more likely to be located in urban heat islands,” says Linda Rudolph, senior adviser at the Public Health Institute, a nonprofit that promotes health equity. “These are areas that have fewer trees, less green space, more buildings, and more asphalt and concrete. Nighttime temperatures can be as much as 22 degrees higher than the surrounding area.”

Extreme heat also worsens air pollution, which already disproportionately affects people of color, Farley notes. According to the US Department of Health and Human Services, Black children are four times more likely to be hospitalized for asthma than white children, and 10 times more likely to die from it. And Covid is at least primarily a respiratory disease. “From a respiratory pandemic perspective, when we think about the existing morbidities and existing medical vulnerabilities of certain communities, we really can begin to get our hands around the disproportionate and expansive impacts of this health pandemic and the pandemic of structural racism,” Farley says.

This heat dome is also setting up the perfect conditions for wildfires, which could pour smoke into cities in the western US in particular—dry, hot air means super dry brush. Wildfire smoke deposits particulate matter in the lungs, leading to inflammation, even in healthy people. In one study done on mice, wildfire smoke decreased the antimicrobial activity of the cells that clear the lungs of harmful microbes. And the novel coronavirus is one seriously harmful microbe.

Put it all together and you’ve got a compounding threat to human health now unfolding across the US, particularly for low-income Americans: Covid-19 is wreaking economic devastation and trapping people indoors just as a weeks-long heat dome parks itself over the country. But this also might be an opportunity to better prepare these communities for life on an ever-hotter planet. The stimulus package following the 2008 economic collapse injected $5 billion into the Weatherization Assistance Program, started in 1976, which compensates homeowners to hire contractors to make improvements like better windows and insulation. By 2012, the revitalized program had weatherized a million houses.

To juice our now even more crippled economy, stimulus packages might do the same. This might take the form of infusing the Weatherization Assistance Program with cash at the federal level, or states might add weatherization to their own Covid-19 stimulus efforts. It can even happen more locally: Vermont’s Burlington Electric Department, a municipally owned electric utility, has included weatherization in its Green Stimulus in response to the pandemic.

“So it’s a way to target both jobs for the construction industry and that problem of the energy burden,” says Elizabeth Sawin, codirector of Climate Interactive, a nonprofit that focuses on the intersection of climate change and inequity. Weatherization efforts in the 2008 stimulus package “also improved the quality of the housing stock enough that they saw things like improvements in hospitalizations or emergency room visits for asthma,” she says. “So to me, it’s a no-brainer. It gets at the direct source of climate change because it’s going to improve efficiency—so less greenhouse gas emissions from the building sector—while providing these essential, positive, life-saving improvements in the community.”