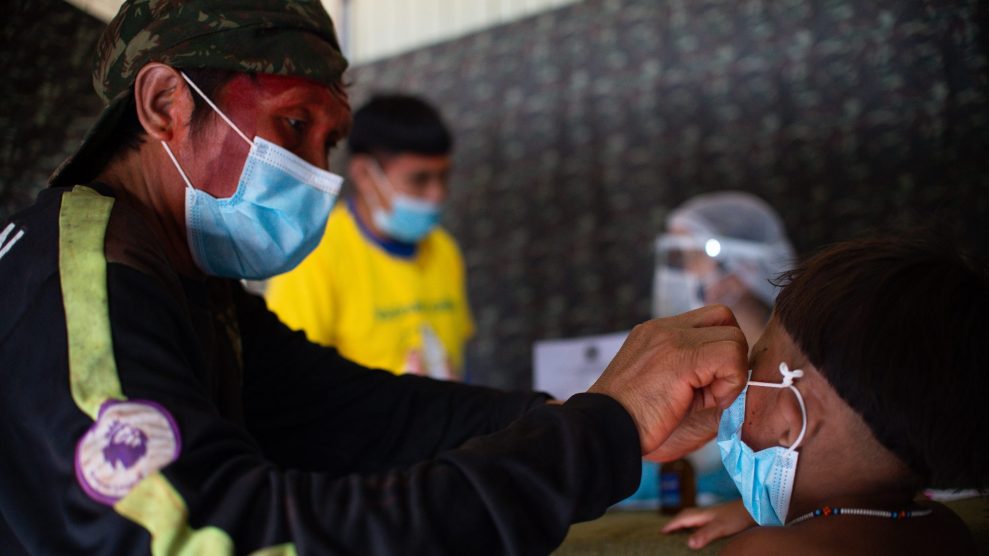 Take a country where Indigenous leaders are killed for defending their lives and lands, where constitutionally protected rights are often violated for the sake of development and mining, and where people are left in precarious conditions due to unrecognized territories and a far-right president who publicly supports the expansion of mining and agribusiness at whatever cost.

Then add a global pandemic, and the results are damaging.

This is Brazil today.

The country ranks second in the world for COVID-19 cases and deaths, just behind the United States. But it’s Brazil’s Indigenous communities that have been hit especially hard, inviting reluctant attention to the grave risks a global virus can have on communities already fighting for their rights, lives and lands.

It’s not just the number of people who have died from COVID-19 that has sparked concern across the country, it’s Brazil’s political landscape.

But this story is not about numbers, it’s about names.

Amidst cries for support and supplies for especially isolated communities dealing with an influx of cases, there have been criticisms against far-right President Jair Bolsonaro, who initially dismissed COVID-19 as “a little flu,” and the impact of his ongoing stance against the rights of Indigenous people.

In most recent news, Bolsonaro has tested positive for the very virus he has downplayed for months.

Some government supports, such as personal protection kits provided by the country’s ministry of health, are only available for those who live on officially demarcated reserves. Yet demarcation of Indigenous territories is a complicated and contentious process that the president has all but halted in his time in office.

Bolsonaro campaigned on pledges to stop the demarcation of Indigenous territories and sell off large parts of the Amazon rainforest to mining companies and agribusiness. And so far, he has kept those promises.

Prominent Indigenous leaders and land defenders have been killed over the past year as critics of the government claim farmers, illegal loggers, miners and hunters feel emboldened and protected by Bolsonaro’s pro-industry and anti-Indigenous attitude.

“For us Indigenous peoples, much more than feeling this neglect, it means feeling institutional racism that ends up becoming an authorized genocide.”

“For us Indigenous peoples, much more than feeling this neglect, it means feeling institutional racism that ends up becoming an authorized genocide,” Guajajara said.

Immediately after his government took office in January 2019, Bolsonaro filed an executive order to transfer the regulation and creation of Indigenous lands to the agriculture ministry.

In a tweet from Jan. 2, 2019, Bolsonaro spoke of “integrating” Indigenous people and people living in quilombos, reserves for descendants of enslaved people.

“Less than a million people live in these places, isolated from true Brazil, exploited and manipulated by NGOs,” Bolsonaro wrote. “Together we will integrate these citizens.”

Bolsonaro’s executive order was a flagrant violation of the 1988 federal constitution, especially Article 231, which expresses the rights of Indigenous peoples to their traditional territories. The move was stopped by Congress and the Supreme Court, but it still sent a message that Indigenous rights stood in the way of industrial development.

The National Indian Foundation (FUNAI) is the federal government body responsible for the demarcation of Indigenous lands in Brazil. Once in power, Bolsonaro’s government deposed FUNAI’s president and put a federal police deputy in his place, Marcelo Xavier da Silva, a man with strong ties to agribusiness who once worked on a contentious congressional inquiry that attacked the very organization he is now charged with running.

The government also put former evangelical missionary Ricardo Lopes Dias (who worked for at least a decade converting Indigenous peoples as a part of the organization Missão Novas Tribos do Brasil, or MNTB) in charge of protecting isolated Indigenous people.

According to Articulação dos Povos Indígenas do Brasil (APIB), people who have not received government recognition are not eligible for government support, forcing many to leave their homes and travel to nearby cities for supplies, and placing them at greater risk of contracting COVID-19.

The organization has also tracked cases where health ministry officials have brought the virus to these isolated communities when they visited.

While Indigenous people continue to organize to provide supplies where needed and spread awareness of the health crisis online, the global pandemic is forcing the world to face much bigger questions than, “How do we contain this virus?” It is forcing us to ask: How did we get here? Who has been the most affected? And what are we going to do about it?

This week, APIB launched an official plan, including general guidelines for local and regional planning to combat the spread of COVID-19 in Indigenous communities, collaborating with activists, artists, journalists, politicians and community members. APIB, leaders like Guajajara, and independent media outlets like MidiaNinja and MidiaIndiaOficial continue to feature community voices, as well as Brazilian celebrities and influencers who have added their voices to the demand for action.

I am managing director of National Observer‘s First Nations Forward series. I have been living in Brazil for the better part of the last year. I was meant to return to Canada at the beginning of the summer, but COVID-19 made travel nearly impossible. Living here, while continuing to report on stories of Indigenous-led stewardship in First Nations across BC, I have come to understand how questions around rights, recognition of territories and struggles for self-determination are connected from the north to the south and concern the whole planet.

Indigenous peoples occupy five per cent of the world’s territory and yet protect 80 percent of the world’s biodiversity. If the Amazon on fire, increased deforestation, and a global health pandemic haven’t woken the world up to the importance of these issues, I’m not sure what will.

But I am willing and anxious to discuss it. So please join me and National Observer editor-in-chief and CEO Linda Solomon Wood as we take a deep dive into these urgent and often underrepresented issues Wednesday evening.