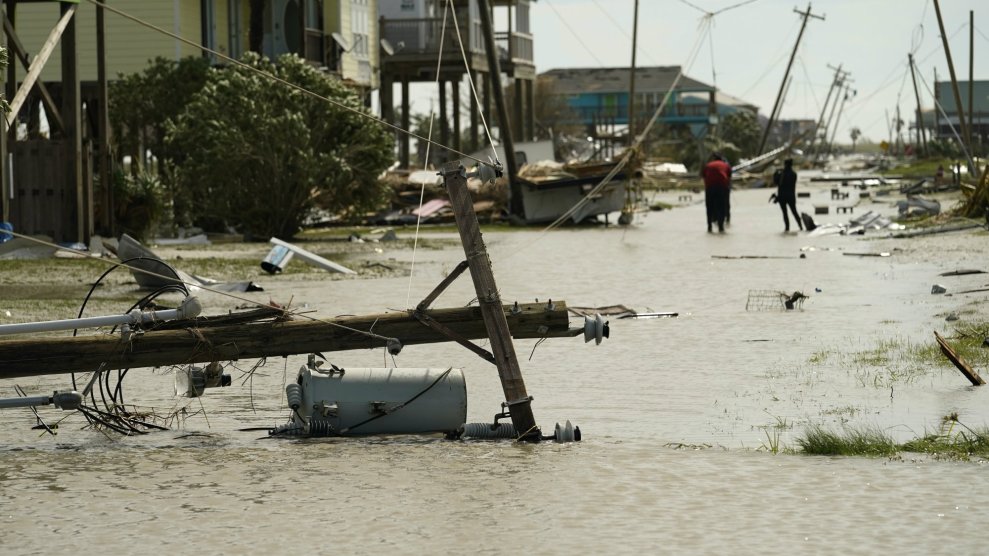 “Historic” has become the word of the year for the worst possible reasons. Even putting aside the global pandemic and its accompanying economic catastrophe for a moment, from wildfires and hurricanes, to floods and heatwaves, it seems as if every weather event of 2020 has been “historic.” California, Oregon, and Louisiana broke records for wildfires and hurricanes. Against the backdrop of a once-in-a-lifetime public health crisis, an unprecedented number of people were forced to leave their homes.

It has been too easy for the United States to think of climate change as an abstraction, with its most related nightmares as problems only for other places—like Kirabati, a small island nation drowning in the middle of the Pacific Ocean, or disastrous droughts across North Africa and the Middle East forcing people to migrate to Europe. But we’ve collectively been ignoring the problem on our own doorstep. In yet another blow to American exceptionalism, the climate refugee crisis is here.

Hundreds and thousands of people in Texas, Louisiana, California, Oregon, and Michigan have been forced to flee their homes because of extreme weather this year alone. (The Midwest was also devastated by a powerful windstorm, also known as a derecho, but scientists are not sure if they can be linked to climate change.) Many of these disasters, like Hurricane Laura or the wildfires out West have been unlike anything we’ve seen before. Scientists say it’ll only get worse in the coming years.

In the early days of the pandemic, local officials and climate advocates knew that preparing for disaster season on top of a pandemic would be a logistical nightmare, as my colleague Rebecca Leber reported in March:

Meanwhile, disaster preparedness experts wonder whether the agency is up to the double-whammy task of responding to natural disasters and a pandemic. Because of coronavirus, FEMA has to rewrite its playbook. Evacuees will need to be physically separated. Workers will have to convince people reluctant to leave their homes that evacuating is safe.

One of the first major tests came in May, when much of the country was under strict lockdown orders because of the pandemic. A rainstorm that dropped up to seven inches of rain caused historic flooding in Michigan. Thanks to climate change, heavy rains have become more common, making massive flooding more common. But the rain didn’t just flood homes and neighborhoods, it also caused a dam to fail in in Midland, Michigan, forcing 10,000 people there and in the surrounding area to flee their homes.

Scientists began warning that the Atlantic hurricane season was going to be “historic” in the spring. Hurricane Laura, which slammed into the Gulf Coast in August, seemed fulfill their most dire expectations. The National Weather Service told residents the only way to prepare for 125 mile-per-hour winds and an “unsurvivable” storm surge was to simply leave the area. Half a million people were told to evacuate Texas and Louisiana in preparation. At least 26 deaths have been blamed on the storm. While southwestern Louisiana struggles to recover, Hurricane Sally, yet another storm bringing “historic” rainfall hit a different region on the Gulf Coast on Tuesday night, this time taking aim for the Alabama and Florida coasts, drowning neighborhoods—and flooding streets. On Monday, at least five tropical storms were swirling in the Atlantic Ocean for only the second time in recorded history.

The Gulf Coast is facing life-threatening floods, meanwhile the West is burning. Partially as a result of, yes, “historic” heat waves across California, so far more than 7,000 fires have burned approximately 3.4 million acres. The San Francisco Chronicle reported that 77,000 people had evacuated Santa Cruz and San Mateo counties in August for one fire alone. According to the California Office of Emergency Services, there are 39,700 people currently under evacuation orders as of Wednesday. The state’s death toll currently stands at 22.

But what gives 2020 its unique historically-bad-year status has been its uncanny ability to expose the fact that the problems facing Americans are actually features of a much larger system.

In neighboring Oregon, the situation grew dire as fires destroyed entire towns and forced more than 40,000 to flee. Officials initially estimated that 500,000 were told to evacuate, but The Oregonian reported that that number was an exaggeration. Still, smoke from the wildfires settled into a thick cloud of darkness over the state and wafted first into California and finally across to the country to the East Coast, with reports of strange skies and beautiful sunsets in New York and Washington, DC. So far, 10 deaths have been reported from the fires in Oregon.

The inequalities already present in our society makes fleeing extreme weather a difficult situation for marginalized people, especially those who are low-income or unhoused. Studies have also shown that disaster recovery often leaves behind the most vulnerable. The pandemic has only made things worse. Incarcerated people, at higher risk of COVID-19, have endured horrendous conditions in the process of getting evacuated.  People fleeing their homes have been put in hotels and in some cases open fields because of the risk of catching the coronavirus in a crowded shelter. Louisiana, for instance, housed some evacuees in hotels while others slept in their cars, according to NPR, because officials didn’t want evacuees to set off a chain of infections.

But what gives 2020 its unique historically-bad-year status has been its uncanny ability to expose the fact that the problems facing Americans are actually features of a much larger system. Not driving your car for weeks on end may have made some of the skies clearer (before they were shrouded by smoke, of course) but if fossil fuel companies are permitted to pollute the Earth at alarming rates, we’re doomed. You can spend months wearing a mask and staying home, but as the coronavirus death toll is quickly approaching 200,000 it underscores the fact that the federal government’s refusal to build a national testing strategy, has only made the pandemic more deadly and more pervasive. Donald Trump’s lies and denial about the severity of the crisis and the federal government’s complete abdication of duty when it comes staving off economic ruin for millions of people has shown that in the richest country in the world, the entire system was so fragile that just one stressor, a pandemic, proved too much to handle. When it comes to the coronavirus, the United States managed to choose both economic calamity and mass death. Our ruinous response to the climate crisis will be a mirror image, only lacking a vaccine to offer some glimmer of hope.