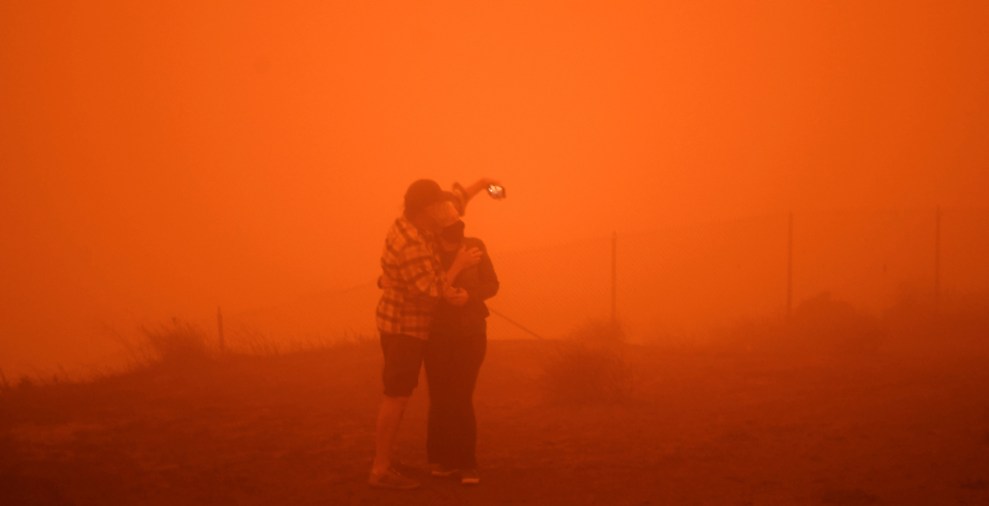 A couple pose for photos by the Golden Gate Bridge at noon in San Francisco.Wu Xiaoling/Xinhua, Zuma

To the millions of American voters who have experienced unprecedented wildfires, relentless storms, and extreme heat this summer, climate change has become personal. Sixty percent of voters in eight battleground states say they have felt the effects or know someone who has, according to a new poll of 896 registered voters surveyed late last week by Public Policy Polling.

PPP, commissioned by the electoral climate group Climate Power 2020, asked voters about extreme weather in the aftermath of Hurricane Laura and the still-raging wildfires in the west. Eighteen percent said they personally experienced impacts, while 21 percent had family affected and another 21 percent knew someone affected.

The president has spent months contradicting his own public health experts and minimizing the toll of a pandemic that has left 200,000 Americans dead, predicting the crisis would turn around on its own. He’s spent the last four years being just as wrong on climate change.

“The divide of battleground state voters’ views on Trump’s science denial versus Biden’s embrace of climate change and science is striking,”

Last Monday in a roundtable in Sacramento, California, Trump added onto his long record of denial. “It’ll start getting cooler, he predicted. “You just watch.” In a speech at roughly the same time in Delaware, Biden said, “The impacts of climate change don’t pick and choose. That’s because it’s not a partisan phenomenon. It’s science.”

The pollster asked voters in Arizona, Colorado, Florida, Georgia, Michigan, North Carolina, Pennsylvania, and Wisconsin which of the candidate’s statements aligned with their views. A clear majority, 55 percent, chose Biden, who was overall the lead candidate in the PPP poll. That compares to a much smaller 28 percent who agree with Trump’s climate views (while 15 percent said neither match their view). Most voters also trust Biden over Trump to respond to climate change.

“The divide of battleground state voters’ views on Trump’s science denial versus Biden’s embrace of climate change and science is striking,” said Jim Williams of Public Policy Polling Group. “A 27-point margin on any issue is quite unusual and shows that taking on climate can have a real impact on voters and—that Donald Trump’s science denial is a real vulnerability for him.”

PPP also found that two-thirds of these voters think climate change should be a priority for the president (with 39 percent, saying it should be a top priority). These findings echo earlier polls that have found climate denial to be a top vulnerability for Trump, and of rising importance to the electorate. That’s especially true for Democrats, who said in a recent NPR, PBS, and Marist poll it’s the top issue, followed by the coronavirus and health care.

This follows the findings of the progressive think tank Data for Progress, which found that voters trust Biden over Trump to handle natural disasters by 7 points. Over a series of polls the month, the think tank found that there has been a six-point uptick, from 30 to 36 percent, among Republican voters who say the hurricanes and wildfires weather are becoming more extreme because of climate change.

“In the final push to November, voters are looking for candidates who not only believe in science, but also have a bold plan to address climate change,” said Climate Power 2020 Executive Director Lori Lodes. “Following weeks of climate fires, hurricanes and severe flooding, voters understand that the climate crisis is here—and that it’s making these extreme weather events worse.”