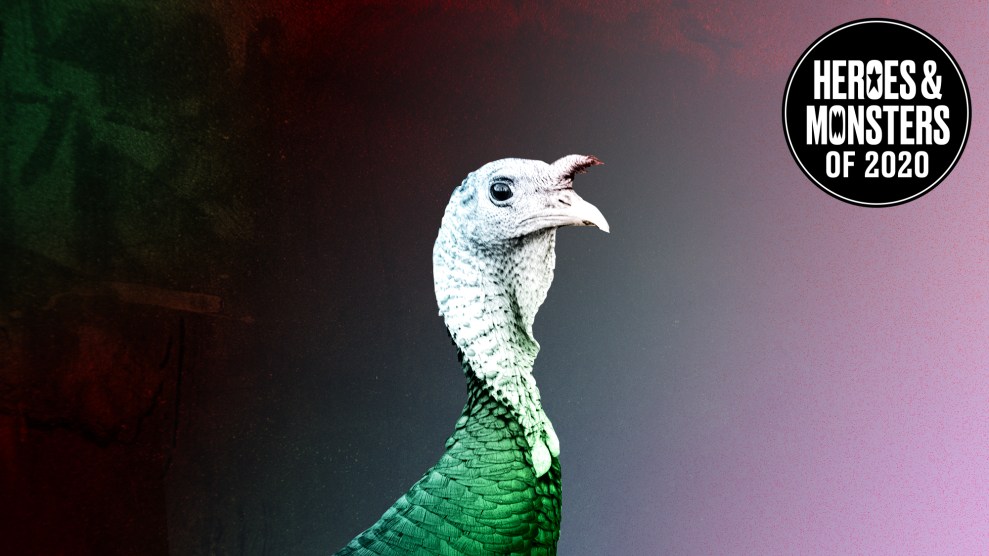 When people sheltered in place this spring, coyotes patrolled the streets of San Francisco. A herd of goats reclaimed a town in Wales. Endangered Thai turtles set a 20-year nest-building record. Los Angeles, which invented smog, had three straight weeks of clean air.

Yet in the Morcom Rose Garden in Oakland, California, nature was not healing.

Gerald, a roughly 20-pound wild male turkey missing a tail feather on his left side, had been a longtime fixture of the tranquil, volunteer-tended park, tolerating the joggers, birdwatchers, and picnickers who passed through his home and sometimes fed him snacks. He liked to spend his mornings waiting in a nearby carpool line with commuters.

But 2020 changed us, and it also changed Gerald. This spring, reports of turkey attacks in the rose garden flooded Facebook and Nextdoor. Local news reports told stories of Gerald kicking and pecking visitors, even jumping on their backs and chasing people into trees. One fleeing woman ended up in the hospital. His favorite targets included older people and baby carriages. In late May the city’s parks department took the extraordinary step of closing the garden “to provide some time and space to work to prevent human-wildlife conflicts.”

Human-human conflict followed as neighbors retreated to social media to stake out pro- and anti-turkey stances. Some called for Gerald to be cooked. The parks department got a permit to execute him June 22, then granted clemency when over 10,000 people (myself included) signed a petition to save Gerald from being euthanized.

You see, if Gerald is a monster, we’re his Dr. Frankenstein. Wild turkeys wouldn’t even be in California without us: Humans forced them here from other states to be hunted. Human behavior also could explain Gerald’s transformation. The director of Oakland Animal Services believes that being fed may have caused him to lose his fear of people; locals think the recent influx of visitors to the rose garden agitated him. I would point you to his heroic qualities: Some have posited that Gerald was simply protecting his chicks.

In any case, Gerald, provided the single most entertaining local news cycle of this godforsaken year. Consider his escapades as officials attempted to neutralize him without harming him. According to Oaklandside’s definitive account:

First, they tried to reinstill a sense of fear in Gerald so that he might avoid humans on his own. They hazed him by charging him and opening umbrellas in his face, though they avoided the most extreme idea—throwing rocks at him.

When the hazing didn’t work, California Fish and Wildlife agreed to relocate Gerald. But first, they had to capture him. They initially tried luring him with food in hopes of caging him, but one park visitor continued to feed Gerald on a daily basis, rendering the bait ineffective. They tried tossing loose nets over him, but he ran away. Oakland Animal Services stepped in, laying netting on the ground, hoping to scoop Gerald up in a snare, but he escaped. Benjamin Winkleblack, assistant director of Oakland Animal Services, baited Gerald with robotic turkey calls, several decoy hens, and an umbrella painted with the likeness of a male turkey. All told, the entire staff at Oakland Animal Services, a number of employees from California Fish and Wildlife, and a team of twenty volunteers failed to capture Gerald.

Gerald evaded apprehension until an expert animal trapper, Rebecca Dmytryk, finally ended his reign of terror. One day in mid-October, after staking out the garden, she tried luring him in with blueberries and sunflower seeds, but then her net gun failed. So, thinking fast, Dmytryk hunched over like one of Gerald’s older victims and pretended to be afraid. When the turkey closed in, she grabbed him by his neck.

Gerald was relocated to the nearby hills, but within a week he found his way to a playground. A spokesperson for the California department of fish and wildlife told the Guardian that its “law enforcement officers went and picked him up again and took him to another location.” Stay free, Gerald.