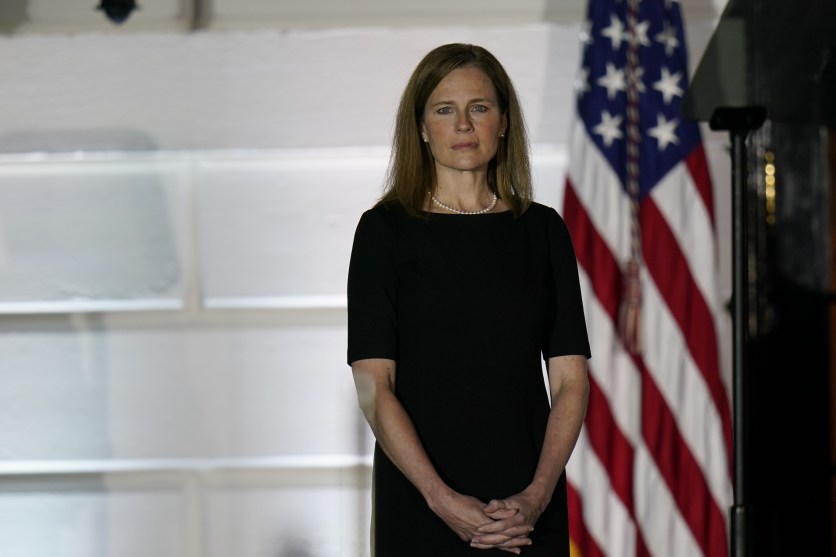 Amy Coney Barrett was about 6 years old when her father, Michael Coney, began his 29-year career as one of Royal Dutch Shell’s top attorneys. She was 16 in 1988 when the oil giant’s own scientists prepared a confidential internal memo stating: “The main cause of increasing CO2 concentrations is considered to be fossil fuel burning.”

On Tuesday, the Supreme Court is set to hear oral arguments in the city of Baltimore’s lawsuit against Shell, BP and several other oil companies demanding damages for the effects of climate change. And it’s unclear whether Barrett, the newest justice on the high court’s bench, will recuse herself from the case.

Justice Samuel Alito, who owns stock in several oil and gas companies, has already recused himself, documents filed with the court show. As of Thursday evening, nothing indicated that Barrett planned to do the same.

Cases involving Shell raised obvious conflicts of interest for the judge in the past. A recusal list Barrett submitted as part of her job on the bench of the U.S. Court of Appeals for the 7th Circuit listed Shell seven times.

“My father worked at Shell Oil Company for many years, and while on the Seventh Circuit, in an abundance of caution, I have recused myself from cases involving those Shell entities with which he was involved,” she wrote in an answer to a questionnaire during her Senate confirmation hearings in October on her Supreme Court nomination by President Donald Trump.

Legal experts said Barrett’s father, who now works as a Catholic deacon in Louisiana, could be called for deposition as part of the case.

He oversaw legal issues for Shell’s offshore drilling arm. The 91-page memo collating what Shell’s scientists knew about climate change in the late 1980s included the impact of warming on the company’s “offshore installations, coastal facilities and operation,” issues well within the elder Coney’s purview.

“Her dad’s role in maximizing Shell’s net revenue from drilling grew even as Shell’s internal documents show it knew burning carbon was changing our climate and he even sought tax benefits from its efforts to adapt its drilling platforms to survive sea level rise and bigger storms resulting from climate change,” said Lisa Graves, executive director of the research company True North Research and a former chief counsel for nominations on the Senate Judiciary Committee.

The connections Barrett’s father has to Shell aren’t the only potential conflict of interest he poses for her in this case. He spent more than 20 years as an “active member of The American Petroleum Institute Subcommittee of Exploration and Production Law” and twice served as its chairman, according to a biography on his former law firm’s website. API, the nation’s largest and most influential oil and gas lobby, filed an amicus brief supporting the oil companies in the Baltimore case.

“It is entirely possible that Justice Barrett’s father could be a witness at a later point in this case,” said Marco Simons, the general counsel at the environmental legal nonprofit EarthRights International. “It sure creates a very problematic appearance that she is very close to the facts of this case, and in most cases that would lead a judge to recuse.”

The Baltimore case is one of the most closely watched attempts by a city or state to force companies that spent decades funding misinformation on climate science that internal documents show their own researchers understood to pay for the destruction unchecked warming caused.

Maryland’s largest city, which has been suffering extended heat waves and coastal flooding as a result of warming that’s already underway, has asked the Supreme Court to refer its lawsuit seeking damages back to a state court. Lawyers representing the oil giants named in the litigation want the high court to keep the case in federal court, where they expect to more easily fend off the allegations.

“It sure creates a very problematic appearance that she is very close to the facts of this case, and in most cases that would lead a judge to recuse.”

Barrett’s own views on climate science remain opaque. During her contentious confirmation hearings last fall, she repeatedly said she was “not a scientist” and therefore did “not have firm views” on warming. She called the issue “a very contentious matter of public debate” and “politically controversial.”

The vague statements, to many, appeared to grant legitimacy to the climate change denial her father’s employers deliberately drummed up to obscure a scientific reality their own researchers understood would upend the oil industry’s business model.

“Baltimore City is already feeling the impacts of climate change in severe storms and flooding, sewage backups and overflows, heatwaves, and polluted air,” said Nabeehah Azeez, an organizer with the Baltimore Peoples Climate Movement. “Baltimore deserves a fair trial on the basis of climate justice.”