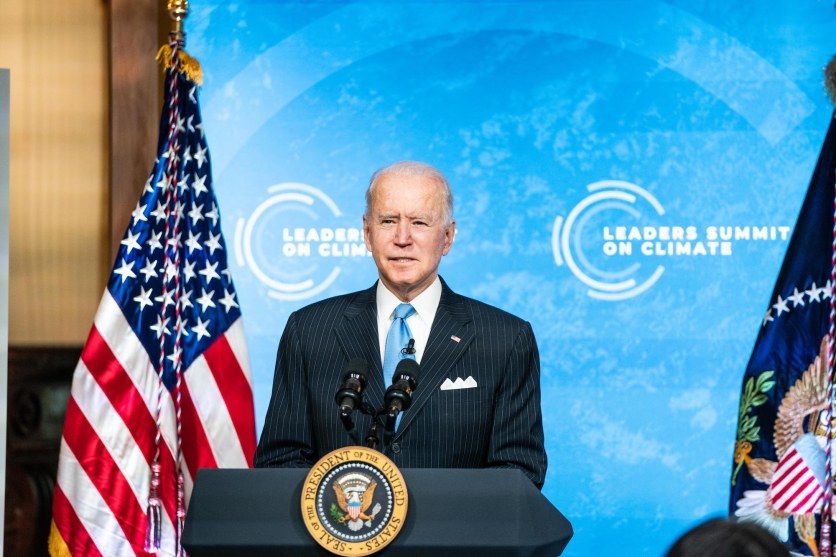 President Joe Biden took over at a moment of existential threat, when the long-term ability of humans to thrive on Earth is no longer assured. Climate change is progressing at such a rate that if we fail to halt it, scientists say, we will face irrevocable and worsening damage. Speaking at a UN climate and security debate in February, naturalist David Attenborough called the climate crisis “the biggest threat to security that modern humans have ever faced.”

A UN study released days later concluded that the world’s nations have to redouble their efforts to meet the objectives of the Paris climate agreement. It emphasized the need for immediate action: “2021 is a make or break year,” UN Secretary-General António Guterres said in the accompanying statement, adding that the study’s findings were “a red alert for our planet.”

Biden’s presidency coincides with a narrowing window of time to act. He has responded by making climate concerns the cornerstone of his agenda, wedding environmental goals to pandemic recovery, infrastructure development, and international security.

Hours after taking office, he signed an executive order that recommitted the United States to the Paris agreement, revoked the permit for the contentious Keystone XL pipeline, and halted federal oil and gas development in the Arctic National Wildlife Refuge, where just one day earlier the outgoing Trump administration had authorized nine new leases.

His administration aims to return the United States to a leadership role in addressing the global climate crisis, despite skepticism among foreign nations blindsided by four years of Trump’s isolationist and anti-science policies, and the inevitable criticism that Biden’s policies are either too much or not enough. Still, Biden’s climate-centric vision is unprecedented. Here is a timeline of key actions he and his administration have taken during the past 100 days.

—Rejoined the Paris climate agreement, committing America to the goal of keeping global warming at less than 2 degrees Celsius—preferably 1.5 degrees—and signaling that the nation will again enact policies aimed at slashing carbon emissions.

—Signed an executive order emphasizing the importance of giving executive departments and agencies “flexibility to use robust regulatory action to address national priorities.” The order rolls back Trump-era policies that limit regulations.

—Issued an executive memorandum that recommits the federal government to heeding science, requires review and reform of existing policies to ensure they are evidence-based, and discourages inappropriate political interference in scientific research and conclusions.

—Signed an executive order that positions the climate crisis “at the center” of foreign and domestic policy and national security, with the goal of bringing the United States to “net-zero emissions, economy-wide, by no later than 2050.” Urgent and meaningful action is paramount, it emphasizes: “Together, we must listen to science and meet the moment.”

—Launched the Climate Innovation Working Group to bolster US progress on green energy, net-zero goals, and other climate initiatives. He also earmarked $100 million for innovative research and development to improve climate resilience.

—Convened 40 world leaders for a Leaders Summit on Climate with the goal of re-establishing American leadership in addressing the crisis and facilitating cohesive international efforts to combat warming.

—Pledged to slash US greenhouse gas emissions in half by 2030 by means of a climate agenda that will create jobs, bolster health and security, and strengthen the economy.