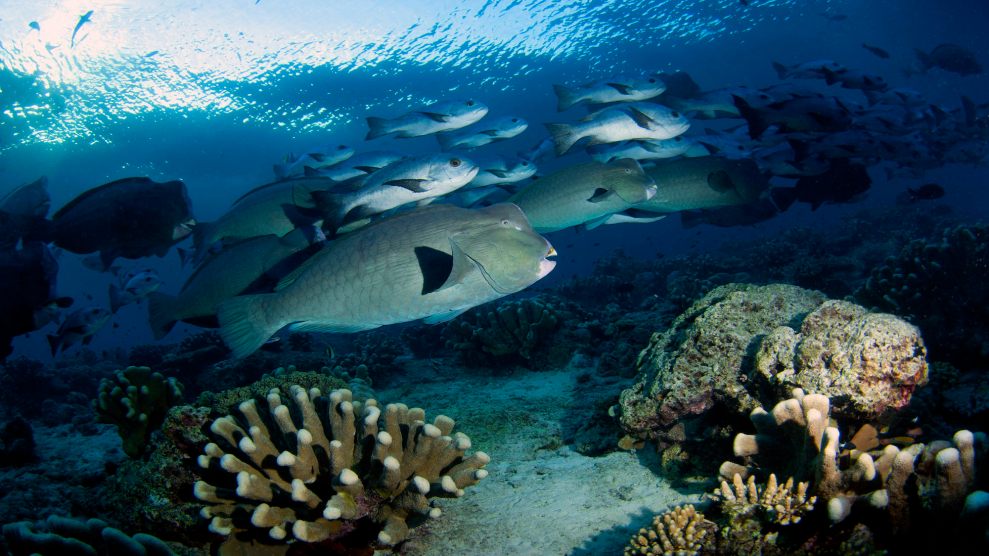 A school of parrotfish near Sipadan Island in Malaysia.Andre Seale/ VW Pics/ ZUMA

Global heating has made the ocean around the equator less rich in wildlife, with conditions likely already too hot for some species to survive, according to a new study.

Analysis of the changing locations of almost 50,000 marine species between 1955 and 2015 found a predicted impact of global heating—species moving away from the equator—can now be observed at a global scale.

The study said further global heating, which is now unavoidable, would cut the richness of species in the ocean in tropical regions even further.

Scientists said the consequences of the shift could be profound and would be challenging to predict. Species attached to the ocean floor had not declined, but the diversity of free-swimming species such as fish had dropped significantly between 1965 and 2010, said Professor David Schoeman, a co-author of the study.

Schoeman, of the University of the Sunshine Coast, said the drop in the richness of species would likely affect communities that relied on the ocean for food in areas where the fish they used to find were no longer there.

“These species haven’t disappeared, they’ve just gone from the tropics.”

“These species haven’t disappeared, they’ve just gone from the tropics,” he said “There’s not only a gradual warming happening, but also superimposed on top of that are marine heatwaves that are becoming more frequent and more severe. They are partly responsible for the rapid movement of tropical species.”

Economies that relied on tourists visiting places for their unique biodiversity could also be affected, he said.
The research analyzed some 7 million pieces of data covering 48,661 species—from large marine mammals such as whales to jellyfish and corals. The database starts in 1955.

Free-swimming species declined at the equator as temperatures rose. This band around the equator where species richness was declining was also widening.

The research, in the journal Proceedings of the National Academy of Sciences, said: “Ocean warming is thus causing large-scale changes in the global latitudinal distribution of marine biodiversity. Despite less warming in the ocean than on land, marine species are shifting their distributions as fast or faster in response to warming than those on land.”

While the study did not try to assess if warming was causing extinctions, Schoeman said this did not mean extinctions were not happening. There was certainly a risk of “extirpation” where even common species could be pushed into cooler areas.

The study said the data “suggests that it is already too warm [at the equator] for some species to survive.”

The ocean has absorbed about 90 percent of global heating since the 1970s, caused mainly by burning fossil fuels and deforestation.

Schoeman said the rate of warming was “quite intense and is becoming more intense” and would continue for decades even with ambitious cuts to greenhouse gas emissions. “We really need to be acting now. Climate change is with us and we are already seeing massive scale rearrangements of biodiversity that underpins all of human life,” he said. “I’m nervous about where this ends.”

Last year scientists warned that ocean heating could radically reorganize marine food webs around the world, causing species numbers to collapse and giving an advantage to species like algae.

“If it gets too warm, there are no species to take their place. You then lose that richness.”

Professor Ove Hoegh-Guldberg, a marine biologist at the University of Queensland and an expert on how climate change is impacting oceans, said it had long-been hypothesized that as equatorial waters got warmer, species would start to move out.

“These species are the only ones that can tolerate the warm waters in the ocean and so if it gets too warm, there are no species to take their place. You then lose that richness of species.”

Hoegh-Guldberg, who was not involved in the study, said warming ocean waters would set off a series of “unintended consequences” that would be hard to predict. For example, if prey species didn’t move at the same rate as their predators, this could create a disconnect.

As some species moved into new territory, you would see a mix of species never seen before, creating more uncertainty for ecosystems and the people who relied on them.

Dr. Jodie Rummer, an associate professor at the ARC Centre of Excellence for Coral Reef Studies at James Cook University, said the findings of the research were important and sobering.
She said tropical species had evolved in relatively stable temperatures and their ability to survive a range of temperatures was limited.

As the preferred temperature range of species started to shift, she said there were only three outcomes. Species could adapt, move or die, and scientists were busy trying to understand how these options would play out across different species.

Rummer said the ocean was not only heating but also being affected by acidification and deoxygenation. “There is a concentration of developing countries in the equatorial zone where fish are crucial to the livelihoods and survival of millions of people. Climate change may lead to redistribution of global catch potential, with the most significant declines likely to occur near the equator.”

Understanding the affects of ocean heating would be crucial for the future of the world’s fisheries, as well as for conservation strategies to protect marine ecosystems.