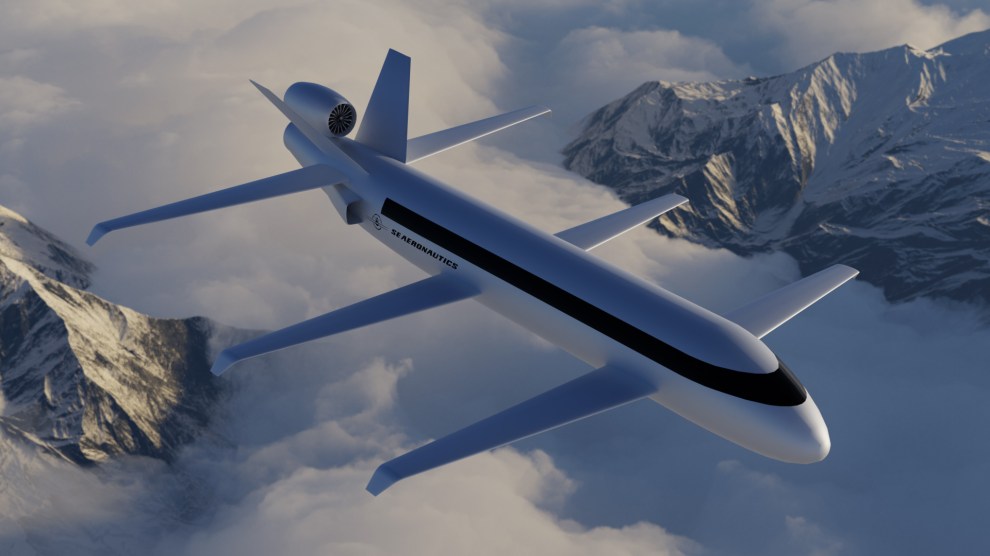 SE Aeronautics sees this wide-body airliner concept as part of a new generation of "sustainable" aircraft.ZUMA

Over the next year, at a research site on the fringes of the Mojave desert in California, NASA will hunt for a breakthrough against one of the climate crisis’s most stubborn challenges—how to eliminate carbon pollution from aviation via a new generation of electric airplanes.

Prodded by Joe Biden’s quest to slash the US’s planet-heating emissions to net zero, NASA is corralling companies to demonstrate improved ways to power aircraft via batteries rather than jet fuel, with the aim of phasing in electric flights for Americans within the next 15 years.

The demonstration tests of electric propulsion will be overseen by NASA’s Armstrong Flight Research Center, located north of Los Angeles, the site of several previous landmarks such as the first crewed plane to break the speed of sound.

An electric-powered 737 would currently need a battery the size of the entire plane: “That’s just not feasible.”

Breakthroughs of similar importance can be made to tackle the growing, and unsolved, problem of how to curb planet-heating gases belched out by the tangle of commercial flights that crisscross the world. Electric planes may be, finally, getting ready to take off.

“Industry used to scoff at the idea of electric planes but that’s no longer the case, they are very interested in this,” said Jim Heidmann, manager of advanced air transport technology at NASA’s Glenn Research Center, which operates an electric flight test facility near Cleveland, Ohio.

“Industry used to scoff at the idea of electric planes but that’s no longer the case, they are very interested in this,” said Jim Heidmann, manager of advanced air transport technology at NASA’s Glenn Research Center, which operates an electric flight test facility near Cleveland, Ohio.

NASA has been working on electric planes for the past decade, grappling with laws of physics that haven’t dogged the mainstream adoption of electric cars. Currently, to power a 737-size jet with electricity would require a battery the size of the plane itself. “That’s just not feasible, it would be too heavy to take off, let alone fly,” Heidmann said. “Weight is quite a bit more important for planes than cars.”

A long, international flight on a large plane may have to rely upon a hybrid model of battery and jet fuel, a sort of Prius of the skies, but advances in lithium-ion battery technology and other components are also leading to the development of smaller, propellor-driven electric aircraft that are now coming to fruition.

Last summer, a modified electric Cessna with a nine-passenger capacity had a successful half-hour test flight.

NASA has created the X-57, an experimental two-seater electric plane it expects will have a range of about 100 miles and a cruising speed of 172 mph. Private companies, meanwhile, are eyeing smaller regional flights of up to 500 miles as a first step. Last summer, a modified Cessna that can carry nine passengers made a successful 30-minute flight in Washington state, a journey that was more cost effective, as well as cleaner and quieter, than if it had run on aviation fuel, according to AeroTEC and magniX, the companies behind the feat.

“Initially we will get to planes carrying up to 20 people, while the technology NASA is working on will stretch that perhaps to planes with 100 people,” said Kevin Noertker, co-founder of Ampaire, a California-based firm recently acquired by SurfAir Mobility, another aviation company, that has run tests of a six-seater electric plane in Hawaii and plans to further try out its technology in the UK later this year.

“For that regional aviation, commuter planes, it’s a no-brainer. I think by the early 2030s we’ll be able to deliver electrified planes that are larger and higher-performance and for the very big planes, some sort of hybrid.”

Noertker said technology improvements and the push from the Biden administration to electrify transportation is “tremendously exciting”. He added: “This is a transformational moment in the aviation industry, it’s an inflection point,” he said.

But significant barriers remain. Jet fuel is still far more energy-dense than batteries, meaning the technology isn’t yet ready for universal adoption. There are other issues, too—aviation regulations aren’t geared towards electric planes, airlines produce thousands rather than millions of units unlike the car industry and there is a certain level of public nervousness about being propelled into the skies by avant-garde technology.

But airlines are coming under increasing pressure to cut emissions in order to address the climate crisis, particularly given the shift to clean energy already under way in the power sector and other modes of transportation. Before the Covid-19 pandemic, which has badly hit the industry, airlines around the world carried a record 4.3 billion passengers, with carbon dioxide emissions leaping 33% in the six years to 2019.

Air travel, researchers have warned, could consume as much as a quarter of our remaining “carbon budget.”

The airline industry accounts for about 2 percent of global emissions, but this share is set to increase as flights rebound and other sectors start embracing renewable energy. Researchers have warned that air travel could eat up as much as a quarter of the “carbon budget” the world has left to avoid global heating of more than 1.5 celsius, a point at which civilization will face punishing climate disasters.

Various airlines have promised to cut their emissions to net zero by 2050 but none can yet vow this will be through ditching jet fuel and going electric. Other avenues being looked at include hydrogen-based fuels, carbon “offsets” where forests and other carbon-rich sites are protected or an ethanol-based fuel derived from the gut bacteria found in rabbits, which has been touted by the Virgin Atlantic founder, Sir Richard Branson. A combination of different approaches may prove the way forward.

“Many of the airlines are on the sidelines looking at what we are doing and it’s our goal to go as fast as possible to get them those solutions,” said Noertker.

“This has already caught the public attention—just look at the rise of flight shaming, or France cutting short-haul flights where you can take the train instead. Call me an optimist, but coming out of this pandemic things will be shaken up and the industry will be more accepting of this technology. Things are going to change.”