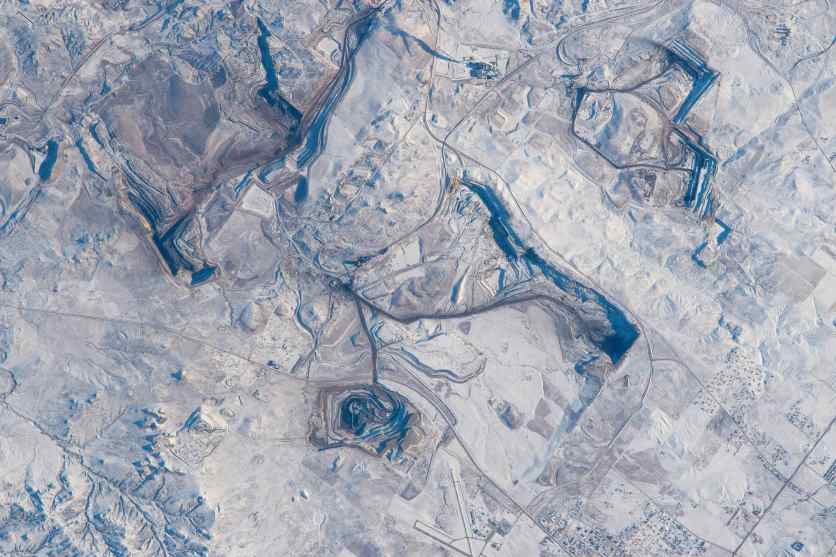 Several coal mines that operate out of the small town of Gillette, Wyoming seen from space. December 28, 2015. Tim Kopra/Planet Pix/ZUMA

Wyoming is faced by a transition to renewable energy that’s gathering pace across America, but it has now come up with a novel and controversial plan to protect its mining industry—sue other states that refuse to take its coal.

A new state law has created a $1.2 million fund to be used by Wyoming’s governor to take legal action against other states that opt to power themselves with clean energy such as solar and wind, in order to meet targets to tackle the climate crisis, rather than burn Wyoming’s coal.

Wyoming is America’s largest coal-producing state, digging up nearly 40 percent of the coal produced nationally each year. The state is heavily dependent upon revenues from mining to run basic services and as it produces 14 times more energy than it consumes, selling coal to other states is a vital source of income.

“We have seen a spike in states trying to block Wyoming’s access to consumer markets.”

The measure sends a message that Wyoming is “prepared to bring litigation to protect her interests,” said a spokesman for Mark Gordon, the Republican governor of the deeply conservative state, which strongly backed Donald Trump in the last two presidential elections.

Trump promised, but failed, to revive a coal industry in deep decline across the US, with Wyoming’s mining sector shedding thousands of jobs in recent years as utilities switch to cheap supplies of gas and states such as California move to phase out polluting fuel sources from their power generation.

Joe Biden has vowed the US will cut its planet-heating emissions in half this decade to confront what he has called “the existential threat of our time” in the climate crisis. But the defiant stand by Wyoming shows that the transition to renewable energy and electric cars will be, in some quarters, bitterly fought. “We have seen a spike in states trying to block Wyoming’s access to consumer markets to advance their political agenda,” said Jeremy Haroldson, a Republican state legislator who introduced the new law.

Fellow Republicans previously proposed banning the closure of any coal plants in the state. Haroldson said phasing out coal would risk the sort of disastrous power blackouts suffered by Texas in February. “It is time we start truly caring about the future,” he said.

Legal experts have said the new strategy is on shaky ground. While the U.S. Constitution’s commerce clause prevents one state from banning goods and services based upon their state of origin, there is nothing to prevent them banning certain things, such as coal, as long as the measure is not targeted at one specific state.

“Demand for coal will continue dropping in the US and abroad, now that clean energy is more affordable.”

Environmentalists argue that lawmakers should be helping build alternate industries to compensate for the inevitable demise of coal, rather than prop up a sector increasingly viewed as polluting and outmoded.

“Demand for coal will continue dropping in the US and abroad, now that clean energy is more affordable and keeps pollution out of our air and water,” said Rob Joyce, an energy campaigner at the Sierra Club in Wyoming. “If we want to get out of this state’s boom and bust cycle, we have to focus our investment on a new economic future rather than clinging to a fading industry.”

But while the rural landscape of Wyoming provides it with good potential for wind energy, America’s least populous state does not have a ready-made replacement for a mining industry that has long provided the bulk of its revenues, funding essential services such as education.

“In many ways this legal fund sounds crazy, like a Flat Earth idea,” said Rob Godby, an expert in natural resources at the University of Wyoming. “But for people in Wyoming, there is no other industry. It’s not just people losing their livelihood but also their culture—people here were proud they kept the lights on across the US. It’s very difficult to go from the hero to the villain.”

Godby said lawmakers privately acknowledge that coal is in a steep decline that will force either cuts in services or wildly unpopular tax increases, but that fighting for the industry publicly has become a litmus test for the Republican-voting electorate.

“The lawsuits will fulfill that rhetoric because it will look like the state is pushing back against the leftists,” he said. “But it’s symbolic, the fight is over—even if you win a court case it’s a pyrrhic victory because no-one really wants the coal. The losses to the state are going to be so large that the rationale is to try to postpone that for as long as possible.”