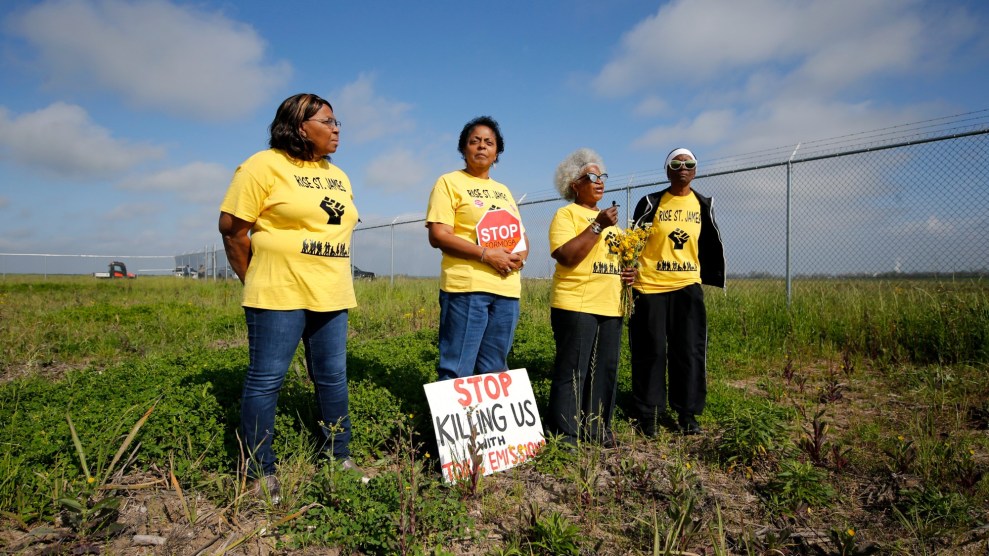 This story was originally published by the Guardian and reproduced here as part of the Climate Desk collaboration.

A retired special education teacher from Louisiana who led a successful grassroots campaign to stop construction of a toxic plastics plant in America’s Cancer Alley has won the 2021 Goldman prize for environmental defenders.

The proposed $1.25 billion Chinese-owned plastics plant would have generated a million pounds of liquid hazardous waste every year, including hundreds of tonnes of methylene diphenyl diisocyanate, a carcinogenic chemical that affects respiratory function, as well as carbon monoxide, volatile organic compounds, formaldehyde and benzene.

Despite the risks posed to human and environmental health, in late 2018 St James parish council expedited permits for the company Wanhua, granted them a 10-year exemption from property taxes and re-zoned the residential area without properly consulting the community.

“They let these companies come into our Black and brown neighborhoods when they know this stuff is killing us,” Lavigne told the Guardian. “This would have been two miles downwind from my house. I wasn’t going to allow any more industry into St James parish.”

Located between New Orleans and Baton Rouge, St James parish sits in what has become known as Cancer Alley—an 80-mile stretch along the Mississippi River where mostly low-income black communities live and breathe amid 200 or so petrochemical plants, pipelines and oil depots.

Lavigne mobilized the community against the Wanhua plant through Rise St James—a faith-based environmental justice organization she founded in 2018. She was at the forefront of the opposition, knocking on doors, testifying at parish council meetings and other hearings, and petitioning local and state officials to issue moratoriums on new industrial construction.

When they refused to budge, Lavigne, the daughter of a civil rights leader, formed coalitions with bigger, more established organizations including 350.org and the Tulane environmental law clinic, designed educational flyers and newspaper ads arguing against the project.

Amid mounting opposition, in September 2019, less than a year after obtaining the permits, Wanhua withdrew its land use application. The community had won. “We stood up for our health because it is more important than wealth. If we hadn’t spoken up, the plant would have gone ahead. It felt like a victory,” said Lavigne.

The company shifted attention to another parish, but Lavigne and her colleagues helped that community organize and keep the plant out.

A spokesperson for the Goldman Prize said: “Lavigne’s grassroots campaign successfully defended her community from the construction of yet another toxic plant in its midst. Her activism prevented the generation of a million pounds of liquid hazardous waste each year … for her unwavering commitment and dedication to her community, Sharon Lavigne will receive the Goldman Environmental Prize.”

Lavigne added: “I didn’t realize I’d become an activist. I was just a concerned citizen trying to save lives.”

Established in 1990, the annual awards recognize grassroots environmentalists from the world’s six inhabited continents. This year’s winners, five of whom are women, include the indigenous Peruvian activist Liz Chicaje Churay, who helped save 2m acres of Amazonian rainforest from loggers and Gloria Majiga-Kamoto, who helped persuade the Malawi government to ban single-use plastics.

The winners have all experienced first-hand the consequences of environmental destruction. For Lavigne, life was very different while growing up when her family lived off the land by raising animals, fishing and cultivating crops. “It was wonderful, we had clean water, clean air and productive soil, we were living the American dream until the chemical plants started opening in the 1960s.”

The industrial plants had probably been slowly poisoning communities for years, but it wasn’t until five years ago when Lavigne fell sick that she realized the full extent of the damage. “I started thinking back to all the people who had died from cancer. St James parish was a sacrifice zone.”

Despite this victory, the struggle is far from over. Cancer rates in St James parish are 50 times higher than the national average, according to the Environmental Protection Agency (EPA), which campaigners say is the consequence of decades of environmental racism. Nevertheless, the state has plans to build or expand more than a hundred petrochemical facilities, with St James parish at the center of the boom.

Lavigne continues opposing new chemical plants including a $9.4 billion complex which the Taiwanese firm Formosa Plastics wants to build near her home. She said: “The struggle continues. It’s a long fight. We have to convince public officials that we want to live, we want to stay in St James and we’re not going to take it any more.”