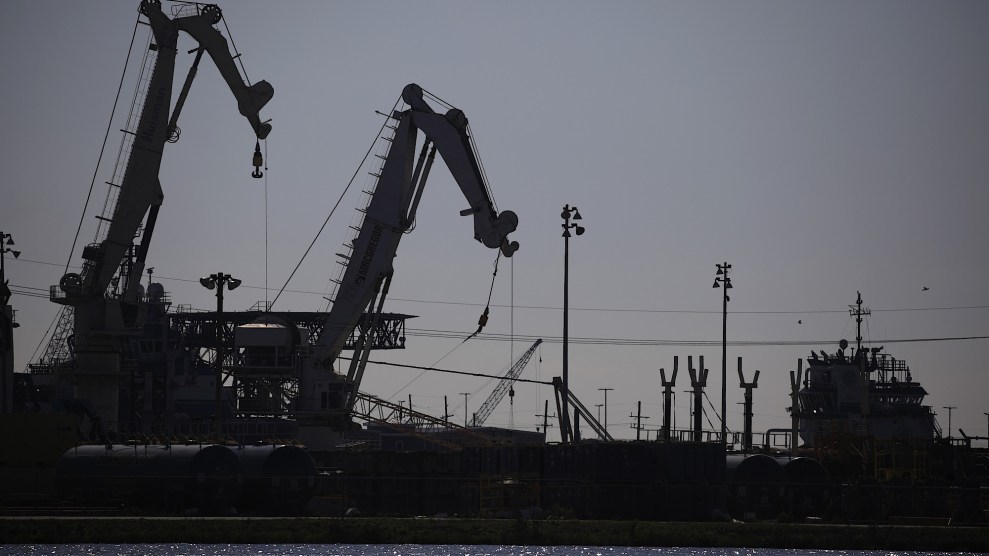 President Joe Biden’s push to combat planetary warming is running headfirst into the industry-friendly, anti-environmental legacy of his Republican predecessor.

On Tuesday, a federal judge in Louisiana struck down Biden’s early executive order that temporarily froze new oil and gas leases across federal lands and waters. The pause, which Republicans have falsely described as an all-out ban, was put in place pending the outcome of a review of the federal leasing program.

The reversal is unlikely to have any immediate impact on the US output of climate-changing emissions. But the ruling highlights perhaps the biggest obstacle to Biden’s climate agenda: a judiciary packed with conservative judges who share former President Donald Trump’s loyalty to the fossil fuel industry.

“Relying on oil and gas industry talking points to guide climate policy is a surefire way to ensure that change doesn’t happen.”

Trump appointed 226 judges during his single four-year term. While that total falls short of the 320 judges Barack Obama added during his two-term presidency, or the 322 judges George W. Bush added during his own, Trump sat 54 judges on federal appeals court benches—just one fewer than Obama and eight fewer than Bush. Those appointees formed what Sen. Steve Daines (R-Mont.), an ally of the fossil fuel industry, called “a firewall to Joe Biden’s harmful attacks on Made-in-America energy” in a tweet Tuesday night.

Trump’s judicial picks have been widely criticized as ideologues. The ruling issued Tuesday proved Judge Terry Doughty of the US District Court for the Western District of Louisiana to be no exception.

Doughty concluded that Louisiana and other plaintiffs in the case proved they would suffer harm from the administration’s action. “Millions and possibly billions of dollars are at stake,” he wrote in his order. “Local government funding, jobs for Plaintiff State workers, and funds for the restoration of Louisiana’s Coastline are at stake.”

He did not mention what’s at stake if nations fail to rein in planet-warming greenhouse gas emissions: rising seas, worsening heat waves and drought, and emerging infectious diseases.

Doughty’s opinion relied in part on a study from Timothy Considine, a University of Wyoming economics professor, that claimed a drilling ban would result in massive job losses in states like Wyoming, New Mexico and Colorado, even though huge swaths of federal leases have yet to be tapped. In the final weeks of Trump’s presidency, drillers stockpiled enough leases and permits to keep producing for years, according to an Associated Press analysis.

Considine has done consulting for the American Petroleum Institute, the US oil and gas sector’s leading trade association, as well as several coal, oil, gas and mining companies, according to his CV. On his university faculty page, Considine notes that his work has been published by the Cato Institute, a libertarian think tank based in Washington, D.C., that was co-founded by the fossil fuel billionaire Charles Koch and has a long history of peddling misinformation about climate change.

“The oil and gas leasing pause is a key part of President Biden’s efforts to turn the page on the Trump administration’s disastrous climate policies and start taking public land stewardship and our climate seriously,” Kyle Herrig, president of the watchdog group Accountable.US, said in a statement Wednesday. “Relying on oil and gas industry talking points to guide climate policy is a surefire way to ensure that change doesn’t happen.”

But independent researchers have dismissed the findings. The study “has a number of weaknesses that exaggerate the economic impacts of potential policies by between an estimated 70-85%,” Laura Zachary, an energy analyst and the co-director of Apogee Economics and Policy, an energy research organization, wrote in a rebuttal.

The Energy Department concluded in a recent analysis that the pause would likely have “no effect” until 2022, “because there is roughly a minimum eight-to-ten month delay from leasing to production in onshore areas.”

Tuesday’s ruling shows the threat that could await a climate bill even if Democrats manage to pass one.

And the impact on US emissions is likely to be negligible in the near term, said Ed Crooks, a vice chairman at the energy consultancy Wood MacKenzie. “Most of the emissions from oil & gas come from consumption, not production,” he tweeted Wednesday. “So even if US production is affected, if consumption remains the same the total effect will be very small.”

Yet even symbolic loss for the White House bodes poorly. Already, the Biden administration is struggling to win support in Congress for its $2 trillion infrastructure plan. Sen. Sheldon Whitehouse (D-R.I.), long a leading climate hawk in the Senate, said last week he was “nervous” that the president’s efforts to win Republican votes on the package would risk the process getting “sucked into ‘bipartisanship’ mud where we fail on climate.”

Tuesday’s ruling shows the threat that could await a climate bill even if Democrats manage to pass one with their slim majorities in Congress.

The conservative majority on the Supreme Court proved instrumental in blocking the Obama administration’s signature climate regulation, the Clean Power Plan—a set of clean-energy subsidies and carbon limits on utilities that Republican attorneys general successfully persuaded the high court to pause in February 2016. Before the White House could challenge the ruling or adjust the rules to meet legal requirements, Trump took office and named Scott Pruitt, the Oklahoma attorney general who led the lawsuit against the Clean Power Plan, as the new administrator of the Environmental Protection Agency.

Tuesday’s order stems from a lawsuit that Louisiana and more than a dozen other states brought against the administration to block Biden’s executive order.

In a statement, an Interior Department official said the agency will comply with the decision and is working to finalize a report that will “include initial findings on the state of the federal conventional energy programs, as well as outline next steps and recommendations for the Department and Congress to improve stewardship of public lands and waters, create jobs, and build a just and equitable energy future.”