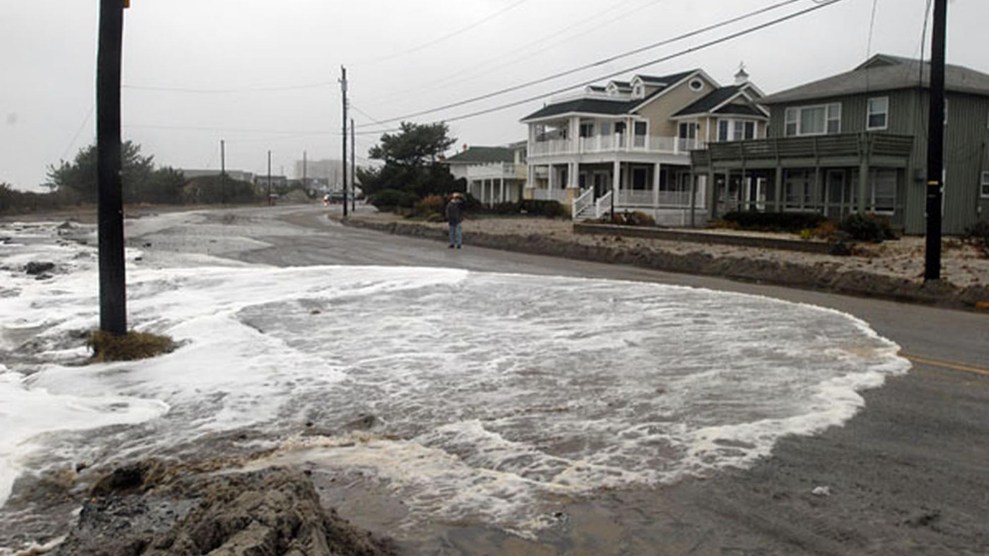 An actual space laser is cruising 300 miles above your head right now. Launched in 2018, NASA’s ICESat-2 satellite packs a lidar instrument, the same kind of technology that allows self-driving cars to see in three dimensions by spraying lasers around themselves as they roll down the street and analyzing the light that bounces back. But instead of mapping a road, ICESat-2 measures the elevation of Earth’s surface with extreme accuracy.

Although this space laser means you no harm, it does portend catastrophe. Today in the journal Nature Communications, scientists describe how they used ICESat-2’s new lidar data to map the planet’s land that’s less than 2 meters above sea level, which makes it vulnerable to the creep of sea level rise. Marrying this data with population figures, they calculated that 267 million people currently live in these at-risk areas. Assuming a sea level rise of 1 meter by the year 2100, they project that 410 million people will ultimately live in an affected zone. Asian countries like Bangladesh and Indonesia are particularly vulnerable, but the United States and Europe will also have no shortage of at-risk populations.

“We strongly believe that if the world is going to be able to deal with sea level rise and to conserve nature in coastal zones—that’s an important aspect—elevation must be known,” says study lead author Aljosja Hooijer, a flood risk expert at the National University of Singapore and Deltares, a research institute in the Netherlands.

The paper’s estimates, Hooijer stresses, are conservative on many levels. For one thing, they did it without factoring in explosive population growth in the world’s cities, because of the uncertainties involved in calculating where people will ultimately move. Currently, 55 percent of the planet’s population lives in urban areas, which the United Nations projects will rise to 68 percent by 2050. But this won’t play out evenly—the populations of certain cities may rise faster than others, or even decline.

“When you want to quantify the flood risk, you need to know the elevation as well. And that’s a big unknown.”

“The work fills a very big gap that we have at the moment,” says Arizona State University geophysicist Manoochehr Shirzaei, who studies sea level rise but wasn’t involved in this new research. Scientists have good models of sea level rise, Shirzaei adds, “but when you want to quantify the flood risk, you need to know the elevation as well. And that’s a big unknown.”

Previously, researchers used satellite radar to map elevations. It works on the same principle as lidar, only it bounces radar off the ground instead of a laser. “The problem with radar is that it can’t penetrate vegetation—only a bit,” says Hooijer. “It gets stuck somewhere between the canopy and the soil surface, and the elevation measure that you get is somewhere in between.” Lasers, on the other hand, readily penetrate vegetation, giving a more accurate measurement. (You may have heard about how scientists are using lidar to see through the trees of the Amazon jungle and map ancient ruins hidden below.)
Hooijer found that 72 percent of the population that will be at risk of inundation will live in the tropics. Tropical Asia alone will account for 59 percent of the at-risk area, because the region is particularly low-lying. “It’s a huge problem for the developed countries—for Europe and for the States,” says Hooijer. “But if you look at the road map, who are the people who are going to suffer most, and probably the soonest? Those are poor people, mostly that live in underdeveloped zones. It’s not given that much attention, that this is really the hot spot. And we were surprised by the numbers ourselves.”
The more a city grows, the more people it has to hydrate, increasing the rate and severity of subsidence.
There’s another problem: In addition to dealing with seawater encroaching on their shores, some cities are also sinking. Land subsidence is a phenomenon in which the ground compacts, usually due to the over-extraction of groundwater. Coastal cities are particularly prone to subsidence because of their geology, as urban centers have historically popped up where rivers meet the sea. Over the millennia, a river would have deposited layer upon layer of clay, and the city would have grown on top of it. But as the metropolis taps into the underlying aquifer, this clay collapses like an empty water bottle, and the city can go along with it. The more an urban center grows, the more people it needs to hydrate, which increases the rate and severity of subsidence.
Hooijer’s modeling does take subsidence into account, but it uses a uniform rate of elevation loss—half a centimeter per year—across the world instead of calculating the rate for each coastline on its own. That wouldn’t be feasible. Still, researchers know that some areas are slumping much faster than that: In parts of Jakarta, for instance, the land is sinking by up to 10 inches a year. By 2050, 95 percent of north Jakarta could be underwater, because the land’s elevation is decreasing while sea levels are increasing. The problem is so bad that Indonesia is planning on moving its capital out of the city.

But not all metropolises have come to terms with the subsidence crisis. “Some governments have not admitted to it—that it’s a problem,” says Hooijer. “If you want to make policymakers buy this, you have to be a bit on the conservative side. So we decided to go for a uniform subsidence rate.”

A “huge challenge” is to make sure short-term interventions after disasters like hurricanes Katrina and Sandy, “fit into a long-term planning strategy.”

This new modeling is also conservative in that it considers sea level rise but not storm surges, which is the sudden rise in water level during a hurricane or tropical storm. Ever more powerful cyclones will push ever more water ashore. While these temporary surges aren’t the same kind of severe, long-term threat as sea level rise that can overtake a metropolis, “a major storm surge can happen tomorrow, having devastating impacts on communities, but also triggering interventions by the government,” writes climate scientist Jeroen Aerts of Vrije Universiteit Amsterdam in an email to WIRED. “A huge challenge is to make sure these ‘short-term interventions’ after major disasters—Hurricanes Katrina, Sandy, Harvey, etc.—fit into a long-term planning strategy anticipating sea level rise. Unfortunately, this longer-term perspective is often missing.” (Aerts studies sea level rise but wasn’t involved in this new work.)

“Some of the adaptation strategies could be that we just relocate the entire community.”

This new data is meant to provide that perspective. But a shortcoming, says Shirzaei of Arizona State University, is that with a resolution of 5 kilometers (about 3 miles), the data collected from orbit is quite coarse compared to what you’d get from lidar taken from a plane or drone. “Those lidar data have a resolution of 5 or 10 centimeters,” Shirzaei says. “The quality is just amazing.”

But the two sources of data could actually work in concert, says Shirzaei. You could use the satellite lidar to identify particularly vulnerable areas—according to this study, places like Bangladesh and Indonesia—then deploy a plane to map the coast in finer detail.

This kind of data could show which coastal areas could be safely fortified against rising tides, and which are now too dangerous for habitation. Texas, for instance, is considering building a $26 billion barrier to hold back the sea near Houston. In other places, it might make more sense to elevate structures to adapt to sea level rise, Shirzaei adds.

But sometimes an engineering solution just won’t be possible. “Some of the adaptation strategies could be that we just relocate the entire community, because for some reason we cannot defend them using in-place structures like sea walls,” says Shirzaei. This is known as managed retreat, and it’s already happening in some cities. San Francisco, for instance, is giving up part of a coastal highway by replacing two lanes with a trail so the land can better hold back rising waters.