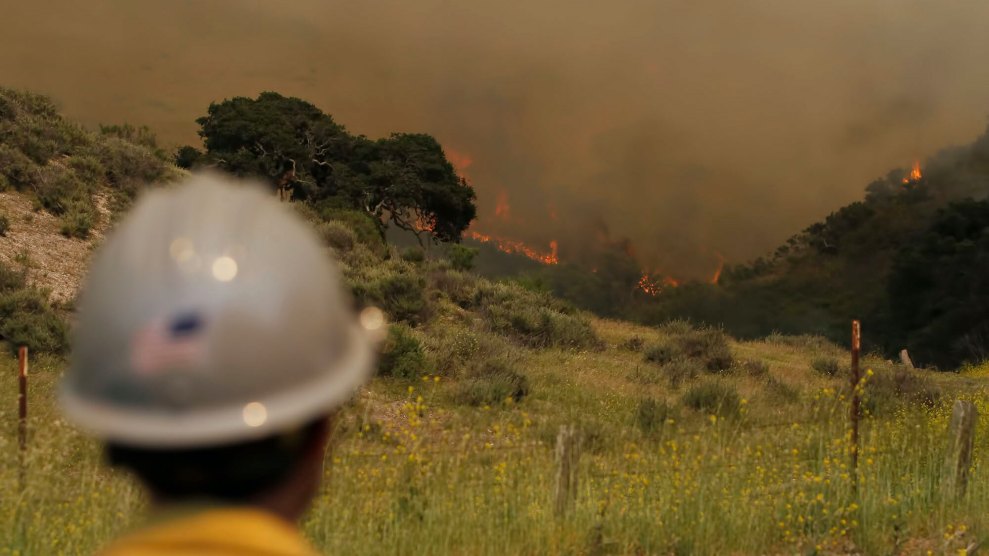 As dozens of active wildfires blaze across California, prompting evacuations and torching more than 200,000 acres, state legislators met Tuesday to consider who really benefits from their spending on climate relief.

The state’s Joint Legislative Committee on Emergency Management held an oversight hearing on the role of equity in the roughly $1 billion that California has earmarked for climate resilience spending—a pot of funds meant to help communities across the state mitigate and recover from the fallout of climate change through efforts like wildfire prevention, forest restoration, and preparation for drought and flooding.

92 percent of the jobs created by the bonds would go to white men.

At the meeting, advocates for racial and social justice raised concerns over how this funding would be spent in the wake of two proposed climate resilience bonds—AB-1500 and SB-45—that have drawn criticism for failing to meet basic equity measures. A study recently published by the Gender Equity Policy Institute found that the proposed spending plans would distribute the funds “in a radically unbalanced, unfair, and unequal way” that would overwhelmingly benefit white men—leaving BIPOC and female residents without their fair share.

While the bills may not pass, they are still a blueprint for how the resilience funds are likely to be spent. “Splitting up the pie is based on those bond frameworks,” said Senator Henry Stern, chair of the Joint Committee on Emergency Management. “That’s the baseline.”

In general, women and people of color are already disproportionately affected by climate change. At a time when these conditions are getting worse, choices in how we approach resiliency will have significant impacts on these populations.

Among the key findings, GEPI’s analysis found that 92 percent of the jobs created by the bonds would go to white men and that the “whitest and most male” regions of California would receive a “windfall” of funding disproportionate to their population. Roughly half of all Black and Latino Californians reside in the Los Angeles region, comprising nearly 45 percent of California’s population. But the current proposed spending plans would allocate only 21 percent of the funds there.

Stern organized the Tuesday hearing after seeing the report and being “blown away” by how significantly people of color and women would be underfunded. The meeting marked the first time the committee had looked at pre-disaster hazard mitigation. “The legislature needed to hear that sort of sobering truth and start making some decisions leading into these budget negotiations. How much are we going to let people and equity drive our strategy?”

The recent bills replicate past mitigation and preparation efforts that didn’t emphasize  factors like urban vulnerability to climate change or the impacts of extended heat waves. For instance, the current plan concentrates the majority of spending in California’s rural North Coast and Sierra Nevada regions—areas where fire prevention and restoration projects have taken place in the past.

“The forestry management projects in the North Coast of the Sierra Nevadas are ready to go. There’s timber harvest plans, and the timber industry is partnered with the state and the federal government, and they all know just what to do,” Stern said.

But according the Stern, the bills fail to address the risk of climate change in urban centers. The GEPI report notes that extreme heat has a bigger impact on health than any other climate change impact, citing research predicting that “Californians will suffer more illness and be at greater risk of early death from rising temperatures and longer heat waves.”

One study cited by the report estimated that by 2050, extreme heat conditions could cause heat-related deaths in California to climb by as many as 6,700 to 11,300 each year. Urban dwellers and outdoor workers are especially vulnerable to extreme heat, in particular those that are low income and can’t afford air conditioning, health insurance, and quality housing. According to the report, the affects of heat conditions on these populations is estimated to cost California $50 billion a year.

“No one’s tried to crack the nut of how to deal with extreme heat in urban areas in any kind of strategic way.”

But the California legislature’s current framework for climate resilience doesn’t focus on these factors. “No one’s tried to crack the nut of how to deal with extreme heat in urban areas in any kind of strategic way.”

Social justice advocates say the approach to climate resilience needs to adapt to meet the needs of the moment, taking into account urban centers, worker protections, and public health–and equity needs to be at the heart of that decision-making.

Still, even if advocates succeed in their effort to make equity a central element in resilience planning, $1 billion is a paltry amount in the face of statewide climate issues that rack up billions of dollars in damage annually through wildfire alone. “We’re sitting here negotiating over a billion dollar pie. It’s just inherently inadequate, when you’re talking about a trillion dollar risk,” Stern said.

Lawmakers will negotiate a spending plan for the bill in coming weeks until the end of the legislative session. It will be revisited when the session reconvenes in August.