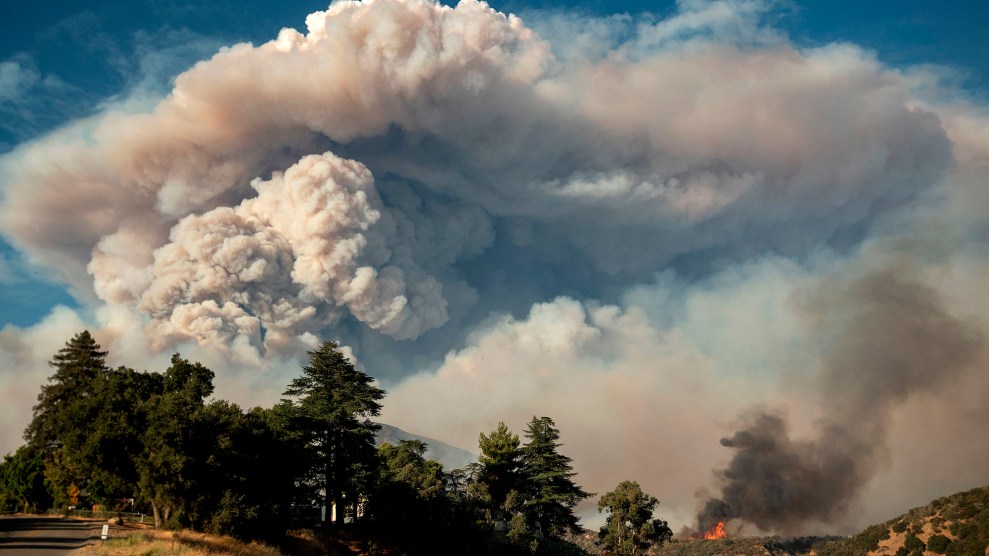 Last week, the US Naval Research Laboratory held a very 2021 press conference, in which scientists reported a very 2021 outbreak of “smoke thunderclouds.” Catastrophic wildfires, exacerbated by catastrophic climate change, had produced a rash of pyrocumulonimbus plumes over the western United States and Canada, known in the scientific vernacular as pyroCb.

“You can think of them as like giant chimneys, funneling smoke that’s being released by the fire up into a thunderstorm,” said David Peterson, a meteorologist at the research laboratory, during the Zoom press conference. “You can imagine this extremely dirty thunderstorm, with all these smoke particles for water to condense on.”

“You can think of them as like giant chimneys, funneling smoke that’s being released by the fire up into a thunderstorm.”

Unlike a typical thunderstorm, though, the resulting water droplets don’t tend to get large enough to fall as rain. “But it is a cloud that can produce a lot of lightning,” Peterson added. These clouds can then advance across the landscape, sparking new wildfires as they go. So not only can the blaze propagate itself by flinging embers ahead of the main fire line (California’s wildfires are so deadly in part because of strong seasonal winds that push them at incredible speeds), it can also produce so much hot, rising smoke that it in essence recruits the atmosphere to light more fires for it. It’s a runaway self-proliferating machine.

The pyrocumulonimbus plumes will also energize the wildfire that spawned them. As the hot air rises away from the fire, air near the ground rushes in to fill the void, supercharging wind speeds at the surface. But because a pyroCb is a thundercloud, it also produces a downdraft along with that updraft, creating extremely irregular wind behavior near the surface. Basically, if you’re expecting a pyroCb-spawning wildfire to behave in rational ways, marching across the landscape with the prevailing winds, you’ve got another thing coming.

And these pyroCbs can be huge. The hotter a wildfire burns, the more rising air it produces. “These are pushing smoke upward at extreme velocities, such that they’re injecting smoke at altitudes above the cruising altitude of jet aircraft,” said Peterson. “So we’re talking 50, 60,000 feet, potentially.” In fact, he says, the smoke will actually pour into the atmosphere’s next layer, the stratosphere, which is above where weather typically occurs. Peterson added that one pyroCb that formed in British Columbia in 2017 produced a plume that persisted in the stratosphere for 10 months.

Once all these smoke aerosols have made it into the stratosphere, they can have a contradictory effect. Because they can actually block out the sun, they’ll cool the landscape underneath. But the plume itself will absorb the sun’s energy, warming the air locally to create a “thermal bubble.” This creates an atmospheric engine that drives circulation of the smoke, what scientists have dubbed a “swirl.” “So that little engine event, created by virtue of putting smoke in the stratosphere, leads to its own stratospheric weather,” said Mike Fromm, of the remote sensing division at US Naval Research Laboratory, during the press conference. “That’s a brand new discovery, but it’s very real. And we’ve seen it now in a number of cases.”

At the end of June, Peterson and Fromm tracked one of the largest pyroCb plumes ever recorded in North America. The formation of these kinds of clouds may not be a bug but rather a feature of a climate gone bizarro. “We’ve been in a wave of pyroCb activity in North America—near-daily activity in recent days,” Peterson said. “This pyroCb outbreak is actually the latest in a series of pyroCb outbreaks that we’ve seen worldwide in recent years.”

The awful bushfire season of 2019–20 in Australia, for instance, produced 38 of these plumes over the course of just a few days. Siberia, of all places, has also been spawning them as its landscape warms, dries out, and ignites. “There have been conspicuously many of them, I would say, over the last few fire seasons,” says UCLA climate scientist Daniel Swain. “And there’s probably a couple of different reasons for that.”

For one, scientists have just been looking for them more, and have developed better detection tools. “If a tree falls in a forest and nobody sees it—but now we’ve got a lot of people hiking through the woods, if you will,” says Swain. “It may also be the case that there are more trees falling in the woods, in addition to there being more hikers.”

Another key variable is the condition of the atmosphere, which needs to be unstable to spawn any kind of thunderstorm. Typically, the bigger the contrast between the warmer air near the ground and the cooler air above, the more unstable things get. A very intense fire burning under a stable atmosphere won’t produce a pyroCb. But a medium-intensity fire might, if the atmosphere is already unstable and the rising hot air gives it a little jolt. “That’s effectively what these fires are doing—they’re giving a kick to the atmosphere,” says Swain.

Another reason we might be seeing more of these plumes, he says, is that wildfires are simply getting bigger and hotter. “If there is an increase in these clouds, the most plausible reason would be an increase in the intensity of the wildfires themselves,” says Swain. Indeed, the places that are seeing more of the clouds—Australia, North America, Siberia—are also seeing fiercer wildfires.

“Drier fuels lead to more heat release and more vigorous updrafts that can then penetrate deeper into the atmosphere.”

And there’s yet another factor. “I think this is because of the record dryness of the fuels,” says Craig Clements, a fire weather researcher at San Jose State University. “Drier fuels lead to more heat release and more vigorous updrafts that can then penetrate deeper into the atmosphere.” Extreme drought in places like the American West has sucked virtually all of the moisture out of the vegetation, priming it to burn.

More pyroCbs mean more headaches for firefighters, who already have to worry about not getting overrun by increasingly massive blazes, much less them spawning lightning that starts more fires. But more pyroCbs could have major consequences for the larger Earth system, too. “If we get more of these large outbreaks, and we have these plumes that encircle a portion of the globe, as we’ve seen recently, what does that mean in terms of feedbacks?” asked Peterson. “Can that cool the surface? Can that affect meteorology?”

This probably won’t be the last of the US Naval Research Laboratory’s very 2021 press conferences.