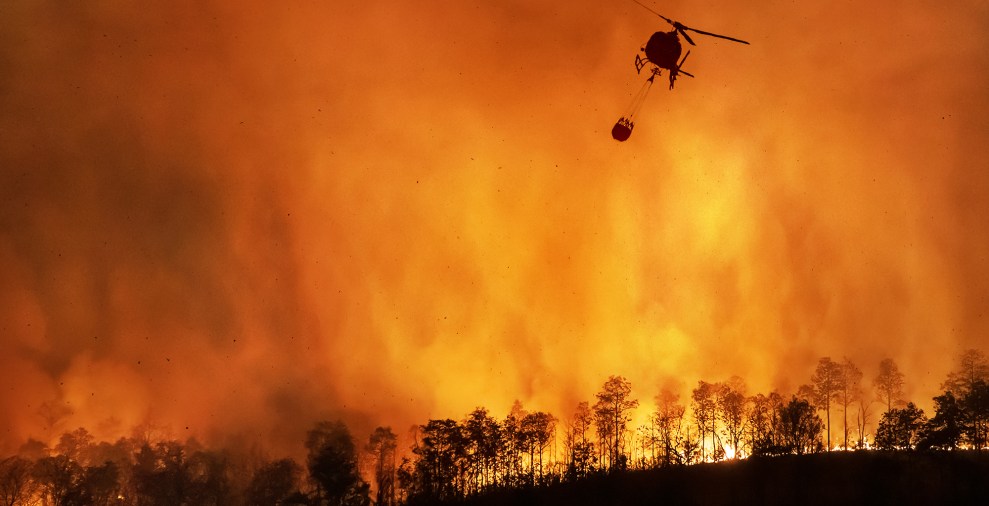 This story was originally published by the Guardian and is reproduced here as a part of the Climate Desk collaboration.

“​​It is unequivocal.” Those stark three words are the first in the Intergovernmental Panel on Climate Change’s new report. The climate crisis is unequivocally caused by human activities and is unequivocally affecting every corner of the planet’s land, air and sea already.

The report, produced by hundreds of the world’s top scientists and signed off by all the world’s governments, concludes that it could get far worse if the slim chance remaining to avert heating above 1.5 C is not immediately grasped.

The scientific language of the report is cold and clear but cannot mask the heat and chaos that global heating is unleashing on the world. We have already caused 1 C of heating, getting perilously close to the 1.5 C danger limit agreed in the Paris climate deal. Downpours of rain have been accelerating since the 1980s.

Accelerating melting of ice has poured trillions of tons of water into the oceans, where oxygen levels are falling—suffocating the seas—and acidity is rising. Sea level has already risen by 20cm, with more now irreversibly baked in.

The greenhouse gas emissions spewed out by fossil fuel burning, forest destruction and other human activities are now clearly destabilizing the mild climate in which civilization began, the report shows. Carbon dioxide levels in the air are now at their highest point for at least 2m years.

All this is already hurting people everywhere, the report spells out. Heatwaves and the heavy rains that lead to flooding have become more intense and more frequent since the 1950s, affecting more than 90 percent of the world’s regions, according to the report. Drought is increasing in more than 90 percent of the regions for which there is good data. It is more than 66 percent likely that the number of major hurricanes and typhoons has increased since the 1970s.

If we don’t reduce global emissions, we are on track for 4 C to 5 C, which is apocalypse territory.

So what of the future? Some heating is already inevitable. We will definitely hit 1.5 C in the next two decades, whatever happens to emissions, the IPCC finds. The only good news is that keeping to that 1.5 C is not yet impossible.

But it will require “immediate, rapid and large-scale reductions” in emissions, say the scientists, of which there is no sign to date. Even cutting emissions, but more slowly, leads to 2C and significantly more suffering for all life on Earth.

If emissions do not fall in the next couple of decades, then 3 C of heating looks likely—a catastrophe. And if they don’t fall at all, the report says, then we are on track for 4 C to 5 C, which is apocalypse territory.

The report is clear there are no cliff-edges to the climate crisis. Each tonne of carbon pumped out increases the impacts and risks of extreme heat, floods and droughts and so every tonne of carbon matters. It will never be too late to act, the report shows. Instead, the real question is how bad will it get?

For example, extreme heatwaves expected once every 50 years without any global heating are already happening every decade. With 1.5 C warming, these will happen about every 5 years; with 2 C, every 3.5 years; and with 4 C, once every 15 months. More heating also means more disruptions to the monsoon rains on which billions depend for food.

More emissions also means the land and oceans become weaker at soaking up that carbon pollution, making heating even worse. With immediate rapid cuts, the natural world can still soak up 70% of our emissions. With no cuts, that falls to just 40 percent.

One of the most blunt sections of the report begins: “Many changes due to past and future greenhouse gas emissions are irreversible for centuries to millennia.” This particularly affects the world’s oceans and ice, which absorb 96 percent of global heating, meaning ice will keep melting and the oceans rising towards our many crowded coastal cities.

The likely range is between 28 cm and 100 cm by the end of the century. But it could be 200 cm by then, or 500 cm by 2150, the report warns. Extreme sea level events, such as coastal flooding, that occurred just once per century in the recent past are projected to happen at least annually in 60 percent of places by 2100.

“That might seem like a long way away but there are millions of children already born who should be alive well into the 22nd century,” says Prof Jonathan Bamber, at the University of Bristol, UK, and a report author.

“We can no longer assume” that citizens of affluent nations “will be able to ride out the worst excesses of a rapidly destabilizing climate.”

The many scientific advances since the last comprehensive IPCC report in 2013 mean better projections for specific regions of the world. It finds nowhere is safe. For example, even at 1.5 C of heating, heavy rain and flooding are projected to intensify in Europe, North America and most regions of Africa and Asia.

“We can no longer assume that citizens of more affluent and secure countries like Canada, Germany, Japan and the US will be able to ride-out the worst excesses of a rapidly destabilizing climate,” says Prof Katharine Hayhoe, chief scientist at The Nature Conservancy. “It’s clear we’re all in the same boat—facing a challenge that will affect every one of us within our lifetimes.”

The report is the sixth by the IPCC but the first to assess the risk of tipping points thoroughly. These are abrupt and irreversible changes to crucial Earth systems that have huge impacts and are of increasing concern to scientists. The collapse of major Atlantic currents, ice caps, or the Amazon rainforest “cannot be ruled out”, the report warns.

“For the tipping points, it’s clear that every extra tonne of CO2 emitted today is pushing us into a minefield of feedback effects tomorrow,” says Prof Dave Reay, at the University of Edinburgh, UK.

So what can be done? The final section of the IPCC report addresses how future climate change can be limited. It finds that 2,400 billion tons of CO2 have been emitted by humanity since 1850, and that we can only leak another 400 billion tons to have a 66 percent chance of keeping to 1.5 C.

In other words, we have blown 86 percent of our carbon budget already, though the report says the science is clear that if emissions are slashed then temperatures will stop rising in a decade or two and the increases in deadly extreme events will be strongly limited.

“Unless there are immediate rapid and large-scale reductions in greenhouse gas emissions, limiting warming to 1.5 C will be beyond reach,” says Abdalah Mokssit, secretary of the IPCC.

“But we never dictate any policy to any country—it is for the governments to take the decisions.”

The scientists have now spoken, louder and clearer than ever before. Now it is for the politicians to act.