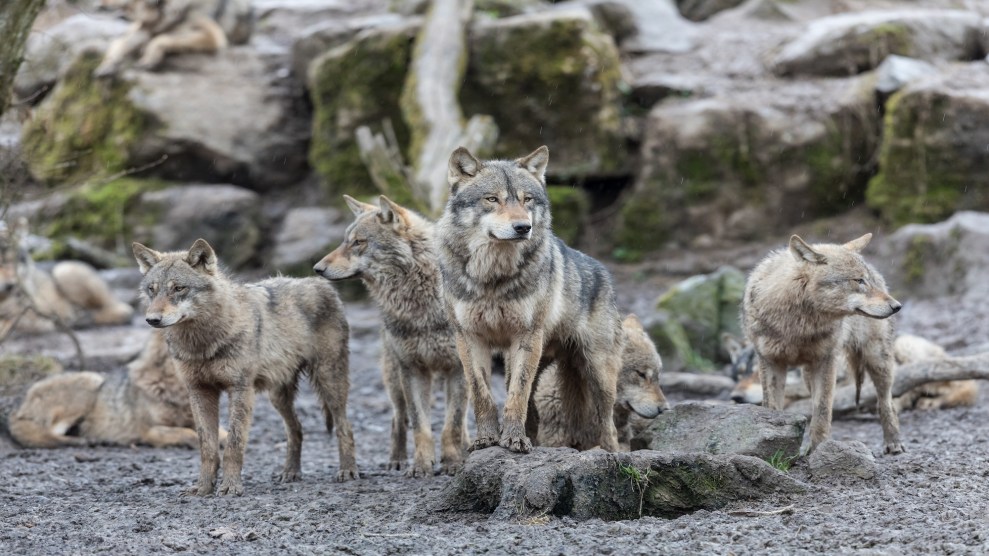 This story was originally published by Huffpost and is reproduced here as part of the Climate Desk collaboration.

New laws liberalizing the hunting and trapping of gray wolves in the Northern Rockies might warrant putting the animals back under the protection of the Endangered Species Act, the U.S. Fish and Wildlife Service said this past Wednesday.

Backed by the ranching industry, which views wolves as a growing liability in states with extensive cattle and sheep grazing, both Idaho and Montana enacted laws earlier this year making it easier to hunt and trap wolves, legalizing tactics previously reserved for far more numerous animals, such as wild pigs, raccoons and coyotes.

But that strategy now looks like it might backfire. Conservation and wildlife advocacy groups, including the Center for Biological Diversity, filed a pair of petitions requesting that the agency re-list gray wolves as threatened or endangered in light of new laws passed in Idaho and Montana to drastically reduce wolf populations. FWS announced Wednesday that its initial review found petitioners presented “substantial information that potential increases in human-caused mortality may pose a threat to the gray wolf in the western U.S.”

“Wolves are more than recovered in our state…and are now thriving in our ecosystems.”

“The Service also finds that new regulatory mechanisms in Idaho and Montana may be inadequate to address this threat,” the agency said in its release. The review is expected to take a year to complete.

The pending decision promises to reignite longstanding tensions among the federal government, Western states and outside groups over who gets to manage gray wolves and how many the region should support.

The gray wolf was largely eradicated from the mainland United States, largely due to government extermination campaigns waged on behalf of ranchers trying to reduce livestock losses. The federal government reintroduced them to the Northern Rockies in 1995. For years, they remained federally protected under the Endangered Species Act, and their resurgence is one of the landmark conservation law’s biggest success stories.

But their recovery also set off years of legal wrangling as state governments sought the ability to manage them as any other non-protected species―including controlling their numbers through hunting and trapping.

Ultimately, states won that control. But hunting and trapping have not contained wolf numbers as efficiently as either state officials hoped or advocates feared. Instead, wildlife officials offered hunters and trappers more tags and extended seasons while wolf populations steadily grew.

The state management plans enacted when Idaho and Montana took control over their wolves call for populations of 150 in each state. Idaho’s wolf population tops 1,500 in Idaho and 1,100 in Montana today.

“Wolves are more than recovered in our state, reaching a population 10 times larger than what was required in the state recovery plan, and are now thriving in our ecosystems,” Chyla Wilson, a spokesperson for the Idaho Farm Bureau Federation, wrote in an email to HuffPost. “Due to the high success of wolf populations, Idaho is now able to manage them utilizing tools we already have in place in the state for other species, such as coyotes.”

“Anti-wolf policies in Idaho and Montana could wipe out wolves and erase decades of wolf recovery.”

Exasperated Republican legislators, facing complaints from both ranchers and hunting outfitters worried about wolves’ toll on big game animals, tried to overstep the authority of state agencies by creating laws specifically to manage wolves. Idaho went furthest, letting hunters kill wolves at night or from motor vehicles, allowing contract killing for wolves and getting rid of the limit on wolf tags that an individual can buy.

A group of 30 former wildlife officials wrote a letter in April criticizing the proposal for snatching wildlife management authority away from trained biologists and putting it the hands of politicians in the state legislature. Idaho Fish and Game Director Ed Schriever opposed the bill.

Environmental groups celebrated Wednesday’s news, though it fell short of their hope to halt this year’s wolf hunts.

“Anti-wolf policies in Idaho and Montana could wipe out wolves and erase decades of wolf recovery,” Andrea Zaccardi, a senior attorney at the Center for Biological Diversity, said in a statement. “We’re glad that federal officials have started a review, but wolves are under the gun now, so they need protection right away.”