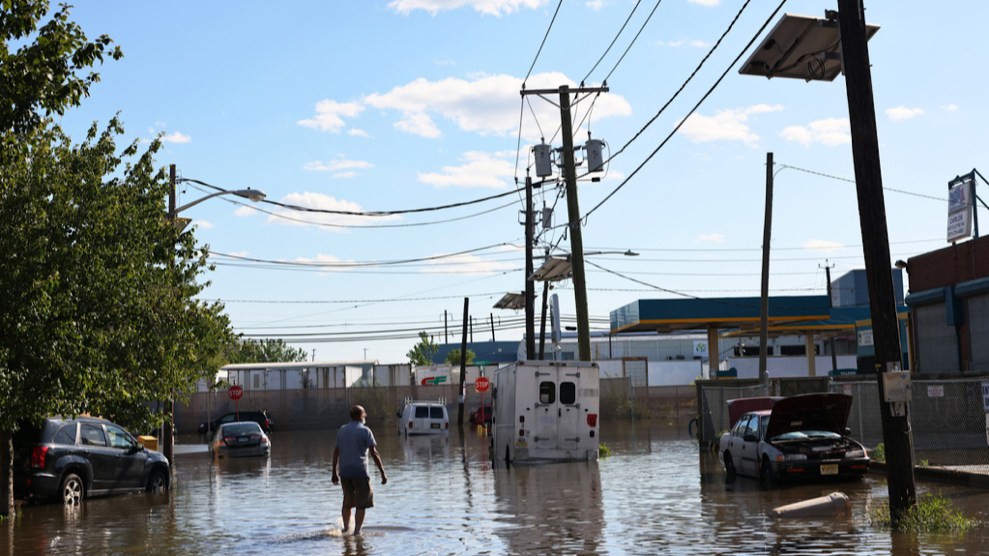 It has been a summer of floods. Northern Virginia at the end of last week, and Texas at the beginning, thanks to Tropical Storm Nicholas. Louisiana and New York City last month, following Hurricane Ida. New Jersey, Rhode Island, and Connecticut, after Tropical Storm Henri. North Carolina, from Tropical Storm Fred. Deadly flash floods caused by heavy rains in Tennessee.

The floods swamped roads, toppled trees, crushed houses, and killed close to 100 people—but as the water recedes, authorities are watching for signals of a second, slower-moving harm. Wherever water has invaded buildings, mold and fungi follow. They are deadly to people with damaged immune systems and dangerous even for the apparently healthy. Yet we have not built the surveillance systems that would reveal how serious their effect may be.

This is not a new problem. In 2004, the Institute of Medicine of the National Academies of Science, Medicine, and Engineering warned in a major report that the health threats posed by whatever grows in damp indoor spaces were under-researched. A year later, Hurricane Katrina broke the levees surrounding New Orleans and flooded 80 percent of the city. One month afterward, Hurricane Rita flooded coastal areas south and east. The waters stood in New Orleans for weeks, and when they were finally pumped out, four out of five buildings were caked with mold.

The extent of the devastation—and the inevitability of families having to go back into ruined houses to strip and restore them—created the conditions for a natural experiment. Researchers leapt into studying human health risks from mold, investigating rates of allergies, asthma, toxin exposure, and dangerous internal infections among people who endured the storm or returned to its aftermath. But those observations didn’t solve the problem the IOM had identified before the storm: a lack of comprehensive data, collected over years, that could help doctors and public health experts predict when people will be most in danger of mold and fungus-related problems.

“There’s no official name for it, there’s no diagnosis code…How are we going to gather data?”

“We don’t have systematic surveillance for mold infections in the United States,” says Luis Ostrosky-Zeichner, a physician and professor, and director of the mycology research laboratory at UTHealth’s McGovern Medical School in Houston—a city that was flooded by Hurricane Harvey in 2017.

“If you are a clinician and you have someone who thinks they have been sickened by mold exposure, there’s no official name for it, there’s no diagnosis code,” says Joan W. Bennett, a fungal geneticist and professor of plant biology at Rutgers University, who moved to that position from Tulane University after her New Orleans home was flooded and left moldy by Hurricane Katrina. “How are we going to gather data on how often this phenomenon occurs? It leaves you with a bunch of just anecdotal stories.”

It’s an important data gap not just because these illnesses appear to be under-reported, but also because climate change is making floods more frequent and more extreme. That is likely to increase the burden of fungal and mold-related illnesses, especially on marginalized groups who may already live in substandard housing or have been pushed to settle in low-lying areas or undisclosed flood plains. “We cannot isolate the impact of a natural disaster from historic burdens of health disparities, whether they are in the Gulf Coast or in the Caribbean or in New Jersey,” says Maureen Lichtveld, a physician who is dean of the University of Pittsburgh Graduate School of Public Health, and who currently has family evacuated from the Hurricane Ida zone. “There are still homes that have never been fully repaired after Katrina. And those are the same homes that are now inundated again.”

There’s a long history of natural disasters making people sick. Reports range from cases of Valley fever after the Northridge earthquake in California in 1994 tossed dirt containing spores of Coccidia bacteria into the air, to aspergillus infections caused by victims of the 2011 Japanese tsunami aspirating bacteria-laden water, to people infected and killed by fungi carried on debris from the Joplin, Missouri, tornado, also in 2011.

The CDC estimates that more than 75,000 people are hospitalized annually for invasive fungal infections.

But it can be hard to pinpoint when an infection or reaction is related to mold specifically, because the damage caused by disasters exposes victims to so many substances. “After these flooding events or hurricanes, there’s so much going on: Not only are you dealing with a house full of mold, but you’re ripping that house apart, so there’s drywall and dust and plaster and all kinds of things that you’re potentially inhaling,” says Tom Chiller, a physician and chief of the mycotic diseases branch of the Centers for Disease Control and Prevention. “It’s hard to tease out the effect of mold.”

Researchers thus face a conundrum: Their clinical instincts tell them people are at risk, but they have a dearth of data to prove it. Immune-compromised people are always at risk for mold and fungal infections; their diminished defenses render them unable to clear away the fungal spores that we all breathe in every day, leaving them vulnerable to organisms such as aspergillus and the ferocious mutant yeast Candida auris. The CDC estimates that more than 75,000 people are hospitalized annually for invasive fungal infections, and cost the health care system about $4.5 billion a year.

The ones most at risk are transplant patients who received donor organs or underwent leukemia treatment, and take immune system-suppressing drugs to sustain their recovery. Those people, researchers say, shouldn’t be anywhere near a moldy house, let alone working to remediate one, and should stay away from floodwaters. But in a survey of 103 immunosuppressed patients the CDC and several Houston hospitals conducted after Hurricane Harvey, half of them admitted they had gone back to clean out their flooded houses, and only two-fifths of that half said they had worn a protective respirator.

The CDC has been working with some of those hospitals on a more complex post-Harvey project, not yet published, which reviews medical records from one year before and after the hurricane to capture whether immune-suppressed people developed invasive fungal infections related to the storm. There’s no clear signal in the data, says Mitsuru Toda, an epidemiologist in the agency’s mycotic diseases branch: “In aggregate, we do see an increase after Hurricane Harvey in the number of people who had invasive mold infections, but some hospitals had a decrease, some hospitals had an increase, and the numbers are small.”

Complicating that finding, she adds, is that some mold and fungal infections have incubation periods long enough that symptoms might not have manifested during that post-storm year. Plus, Toda says, some physicians in Houston told the agency they preemptively put their most immune-suppressed patients on antifungal drugs—which protected those patients, but would have confounded any calculations of the hurricane’s effect on their health.

Ostrosky-Zeichner was one of those clinicians. “In theory, we should be seeing hordes of mold infections after major flooding events and hurricanes, but we’re not quite seeing that so far,” he says.

For some people, mold “can trigger an asthma attack, which is a very serious reaction.”

Researchers are also worried about the much larger proportion of the population, estimated to be up to 40 percent, who are prone to allergies and could react to mold and fungal growths in their houses—as well as about the rest of the population, who can develop new allergies after exposure. “For most people, the health effect that we see most often is respiratory,” says Felicia Rabito, an epidemiologist and associate professor at Tulane’s School of Public Health and Tropical Medicine. “A severe reaction would be like a breathing problem; a less severe reaction would be allergic-type symptoms. If you’re an asthmatic, though, and mold is a trigger, you can trigger an asthma attack, which is a very serious reaction.”

Rabito was at Tulane during Hurricane Katrina, and afterward worked on a project assessing the respiratory health of children in the city. It revealed that children whose families had evacuated and then returned didn’t actually experience many allergic or asthmatic reactions to mold in their homes, possibly because the houses had been so scrubbed and rebuilt that few contaminants were left. But they were at risk from drenched and moldy building debris in the streets, which had been heaped in piles large enough to send plumes of allergens into the air.

The personal experiences of many of these researchers has underlined for them how insidious a foe mold after flooding can be. Jose Vazquez, a physician and chief of infectious diseases at Augusta University’s Medical College of Georgia, had four feet of water in his house for weeks in the winter of 2015–16, after the Army Corps of Engineers opened a dam on the Savannah River. Despite being completely healthy, “even a normal person like myself can have pretty bad reactions to mold,” he says.

Many people actually are immune-suppressed in ways they might not even think about.

Plus, he adds, many people actually are immune-suppressed in ways they might not even think about. Many of the drugs advertised to treat autoimmune diseases, such as rheumatoid arthritis and psoriasis—think of any drug name that ends in -ab—work by tamping down immune-system overreactions. If someone feels healthy because those conditions are under control, they may jump into home-repairing and yard-clearing as soon as possible, without realizing they’re vulnerable to these after-storm effects.

Acknowledging the rising incidence of floods, the CDC has published public service announcements warning about mold and cleanup guidance for homeowners and renters. Agency officials are collaborating with several physicians on a continuing medical education unit to alert them to possible problems in patients. Those could reduce the likelihood that people make themselves vulnerable, and keep down the incidence of infections. But this won’t solve the conundrum of not knowing how many people are becoming infected, which is always a precondition for getting funding and attention needed to solve a public health problem.

“There are people out there cleaning up buildings who practice good hygiene, and wear masks and gloves, and do it for a long time, and nothing happens,” Bennett says. “And there are other people who have maybe two weeks of exposure, and they’re a mess. We don’t have the data to prove this. But I truly believe that people are getting sick.”