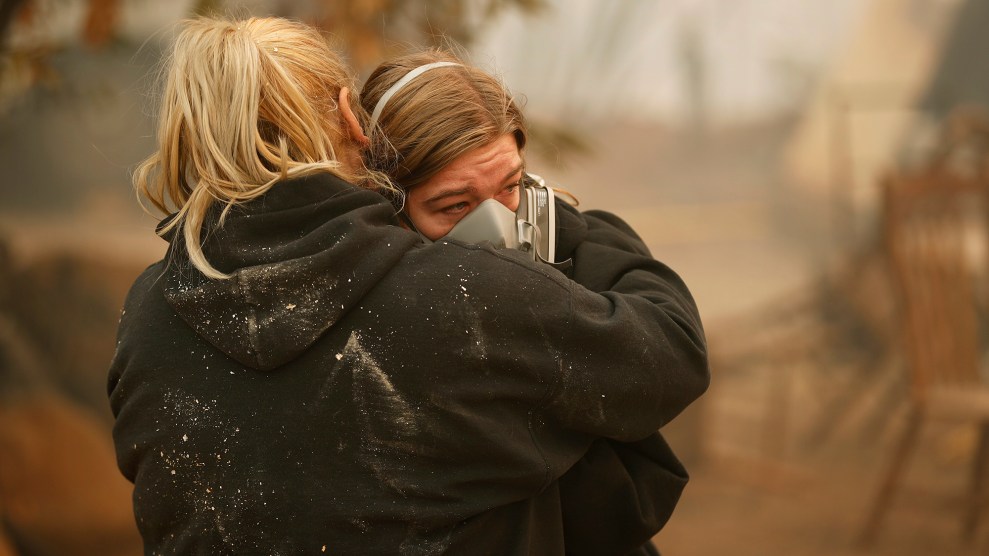 A mother and daughter comfort one another in the remains of their home in Paradise, California, leveled by the Camp Fire in November 2018,John Locher/AP

On November 8, 2018, Sally awoke to the smell of smoke and a phone call from her daughter, imploring her to flee her home. It was 8:30 a.m., but the sky was dark with smoke. The Camp Fire was bearing down on Paradise, California, and the entire town was under an evacuation order. The air was so warm from the encroaching fire that she left her coat behind, mistaking the fall morning for a summer night.

As Sally, 69, drove away, she heard her neighbors’ propane tanks explode. She led a line of cars on a winding narrow road, banked, at times, by steep ravines. Through the haze of smoke, Sally, who asked that her last name not be printed, could see little but the pavement in front of her and flames to the east that made it seem like she was driving into the fire, rather than away from it.

“To survive this, I intentionally shrunk my awareness to absolute essentials—I was like an automaton responding to the police order to evacuate out this road, just trusting that this would get me out,” she said. “That kind of hyperfocus—put one foot in front of the other and repeat—persisted long after I was safe from the fire.”

It took her more than two hours to get to the relative safety of a hotel in Chico, 14 miles away. She had survived the deadliest and most destructive wildfire in California’s history. But her house, along with 95 percent of the structures in Paradise, was gone.

Eight months later, Sally awoke to the sound of rain on the roof of the garage apartment she was renting in the Redwoods, convinced it was the roar of a wildfire. She started packing a go-bag, just to be able to fall back asleep. She developed an intense fear of heights that made driving on roads that border steep drop-offs all but impossible. The fear grew so intense that when she moved back to Chico in 2020, she avoided driving on freeways with overpasses. She had become hypervigilant to potential threats from her environment—a common manifestation of post-traumatic stress disorder.

Psychologists know that mental health issues always spike in the wake of natural disasters. What’s changed is the climate.

Sally was eventually diagnosed with PTSD. And she is not alone.  A 2021 study from the University of California-San Diego found that Camp Fire survivors had rates of PTSD on par with war veterans, and they were at increased risk for depression and anxiety. That’s not necessarily new: Psychologists know that mental health issues always spike in the wake of natural disasters. What’s changed is the climate.

Extreme weather events are becoming both more frequent and severe, and now, the next fire, hurricane or flood often hits before the hard work of recovery is done. Trauma is already accumulating in some of the regions hit hardest by climate change.

These impacts may be most apparent to the therapists and counselors who work in disaster mental health, a field that grew out of research on the mental health consequences of war. Today, mental health professionals in this field are often deployed in the immediate aftermath of all kinds of traumatic events, delivering what experts call psychological first aid—ensuring that survivors have access to food, water, shelter and someone to talk to.

Karen Koski-Miller, the Disaster Mental Health Lead for the American Red Cross, spent two weeks volunteering in Louisiana after Hurricane Katrina in 2005. When she deployed to the state again in 2020, she stayed for two months, thanks to back-to-back storms. She returned to the same region during this year’s hurricane season.

“You’re talking about people, who, if they’re fortunate enough to be in the process of rebuilding, have to drop everything and evacuate again,” she said. “It sets them back.”

The Federal Emergency Management Agency (FEMA) deploys mental health professionals to disaster zones, as well,  and typically provides counseling services for about a year. A 2020 investigation by the Center for Public Integrity, however, found that the program only reaches a tiny fraction of the people who need it and, like all forms of federal assistance, is often distributed unequally.

Studies also show that because disaster aid is typically based on property values, wealthier homeowners tend to come out ahead after disasters, while renters and those who live in neighborhoods with lower property values—usually low-income and minority communities—fall further behind. (Low-income and minority communities are more vulnerable to the impacts of wildfires in the first place.) These disparities can exacerbate mental health issues for the poor.

For those lucky enough to receive early assistance, this kind of psychological aid can start them on the road to recovery, said Karla Vermeulen, a psychologist at the Institute for Disaster Mental Health at the State University of New York at New Paltz. But for a subset of people who develop PTSD, remembering the event becomes equivalent to re-experiencing it. Heart rates rise, stress hormones surge and the body is primed for fight or flight.

Back-to-back disasters can undermine recovery, making it all the more likely that an acute stress response will develop into a chronic issue like PTSD. Among war veterans, research has found that the best predictor of whether a soldier exposed to a traumatic event will develop PTSD is previous trauma, according to Ben White, a Colorado-based therapist who specializes in climate psychology. Trauma, he said, “is like a repetitive stress injury.”

“Then the Bear Fire hit, and then the Dixie Fire… And then there’s also a whole new group calling in. It’s like Groundhog Day.”

Darla Lynn Gale, the founder and executive director of Heartstrings Counseling, a nonprofit that offers low- and no-cost counseling in Loomis, California, said many of her clients who survived the Camp Fire initially responded well to therapy developing coping skills and working through their trauma. “Then the Bear Fire hit, and then the Dixie Fire hit,” she said. “And then there’s also a whole new group calling in. It’s like Groundhog Day.” About three-quarters of Heartstrings’ clients are now fire survivors.

Every year since the Camp Fire, a wildfire burns close enough to Sally’s new home in Chico to fill the sky with smoke. She stays up all night tracking its progress. “Everybody here has had plenty of opportunities to have their PTSD rekindled,” she said.

The treatment for trauma is long-term. Just how long depends on each individual, according to Gale, whose therapists use specialized techniques to help clients process traumatic memories. Eye movement desensitization and reprocessing therapy, in which clients recall traumatic memories while performing rhythmic eye or body movements, has been shown to reduce the emotional weight of the recollections, for example. And cognitive behavioral therapy, which focuses on altering emotions by changing thought patterns, is often used after what Vermeulen calls “acute” traumas, once the initial threat has passed.

These kinds of long-term mental health inventions tend to only be accessible to a small portion of the people who need them—only about half of people with mental illnesses get treatment, due to financial barriers, limited providers and stigma, according to the National Alliance on Mental Illness—and they become even harder to access after large-scale disasters.

“The resources here have been totally congested for people with fire trauma,” Sally said. She said she has hesitated to pursue a referral for EMDR treatment because mental health resources are so scarce in her community.  “I didn’t want to take those resources away from somebody who needed it more,” Sally said.

“What we’re seeing is this rising sense of ‘maybe there is nowhere to go to feel safe,’” says therapist Leslie Davenport.

Sally found that her anxieties on the road began to ebb after she happened upon a video of a rollercoaster ride her cousin posted to Facebook. The algorithm began serving her dozens of rollercoaster videos, and she discovered that watching them helped to desensitize her to her fear of driving near drop-offs. She can now drive on all the freeways in Chico again, though she still avoids the foothills of the Sierras.

What’s still not clear: how the existential threat of climate change could compound the trauma of these increasingly common, acute disasters. “What we’re seeing is this rising sense of ‘maybe there is nowhere to go to feel safe,’” said Leslie Davenport, a therapist who specializes in climate psychology. “With climate change, there’s no going back to that sense of safety and stability that we may have known before, because there is this escalating path that we’re on, with rising levels of threat and rising levels of distress.”

“It’s something people in my field are struggling with. How do we adapt our practices that came out of the more traditional acute threat model to deal with something that is just so inescapable?” Vermeulen said. “There’s no easy answer to that, unfortunately.”