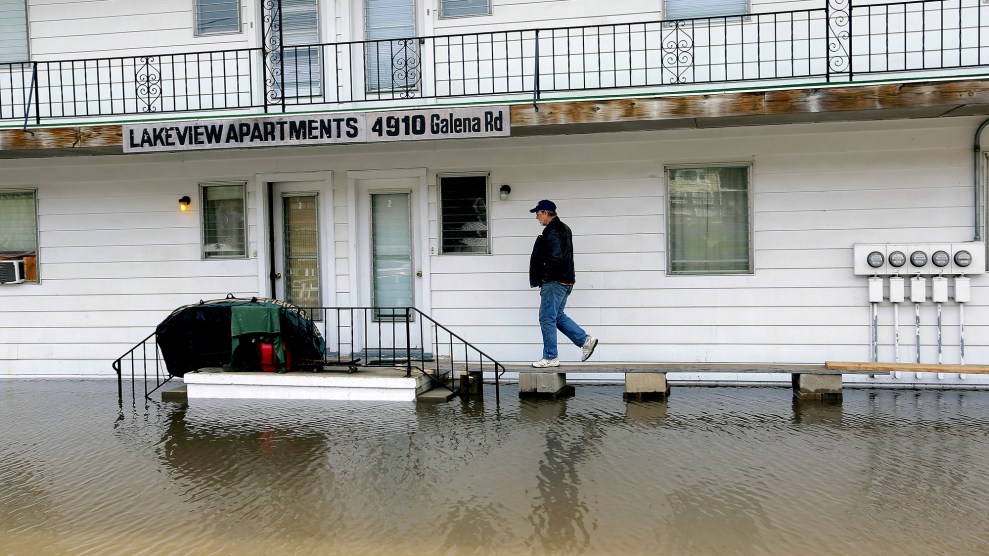 Flooding from the Illinois River deluged the Lakeview Apartments in Peoria Heights in April 2013.Seth Perlman/AP

Climate change is on a collision course with the affordability crisis in U.S. housing—and renters are poised to fare the worst. That’s the conclusion of a new report from Harvard University’s Joint Center for Housing Studies, which found that renters face the greatest risk from climate-related disasters striking their homes. Renters are also largely left behind in efforts to upgrade and fortify U.S. housing stock. As rental demand reaches an all-time high (and prices skyrocket in tandem), the report calls for a “permanent, fully funded housing safety net” and firm measures to protect existing housing from the next major disasters.

Last year set records for climate-related disasters in the US. More than 40 percent of Americans lived in counties that experienced a federally declared disaster, and the country faced 20 different climate catastrophes with billion-dollar price tags. The year also saw record increases in rents along with generalized inflation—and  the end of the federal government’s eviction ban, which lasted (in different forms) from the onset of the pandemic until the fall of 2021.

In Houston, Texas, where 60 percent of housing units are rented—nearly double the statewide rate—rents jumped 10 percent last year, and thousands of tenants were evicted, according to Princeton University’s Eviction Lab. Meanwhile, wages in the Houston area increased by just 2 percent.

Adding fuel to the fire is the fact that, of America’s largest cities, Houston faces some of the most acute threats from climate change. Tens of thousands of rental units in the city are at risk of being destroyed or severely damaged by climate disasters, according to the Harvard center’s analysis of the Federal Emergency Management Agency’s National Risk Index. Nationwide the figure stands at 18 million units, or 40 percent of the country’s rental stock.

In renter-heavy cities like Houston, protections are scant and recovery funds tend to favor homeowners.

However, in predominantly renter-occupied cities like Houston, protections from these disasters are threadbare, and recovery funds tend to favor homeowners. In the face of emergency, renters are more than three times less likely to be able to afford to flee—and the ones who can are at greater risk of being kicked out of their homes if they become damaged, according to the report. Historically, landlords have been given free rein to evict tenants under the guise of remodeling and rebuilding battered homes and apartments following disasters.

Not only are rental units (and renters) more threatened by climate change—they’re also less likely to see the improvements the housing sector needs to adapt to and slow global warming. Lacking ownership rights, tenants have little power to push for their homes to be retrofitted either for energy efficiency or disaster resilience. According to the report, landlord surveys over the last two years have suggested that some owners have deferred maintenance spending, including structural repairs, since the pandemic began.

Also, although they consume less energy than owner-occupied homes, renter-occupied homes are less likely to have energy-efficient measures put in place to help lower residential fossil fuel emissions. As landlords and property ownership groups base decisions on profit margins, “property owners have little incentive to improve the efficiency of their units because they often do not pay for utilities” and “do not directly benefit from investing in efficiency retrofits,” the report states.

But the researchers behind the report argue that these problems can be tackled by targeted government spending priorities. “The pandemic has brought the long-simmering rental affordability crisis to the fore,” Harvard research associate Whitney Airgood-Obrycki wrote in a blog post about the report, but “the nation has the opportunity to pull millions of households out of poverty, address longstanding inequities in housing delivery, and ensure that every household has access to a decent and affordable home.”

The report argues that the federal government should enact “far-reaching” measures in both the short and long terms. It calls for more funding to be allocated for emergency assistance and eviction prevention programs, which saved millions of families from eviction in 2020, and the long-term need to build more affordable rental housing. The report also proposes more federal subsidies for low-income tenants’ home weatherization projects and rebates for energy retrofits—elements once expected to be included in the Build Back Better Act.

By creating this “housing safety net,” the report argues, the country’s most vulnerable residents will remain sheltered in the face of potentially life-altering severe climate events.