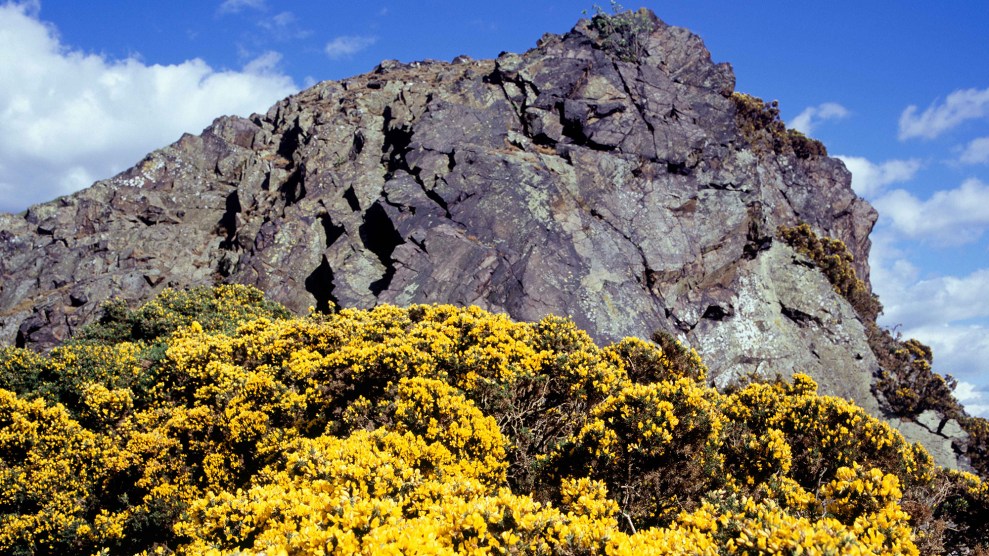 The gorse bushes that have invaded many Scottish landscapes could produce enough protein to feed millions of people, according to the leader of a Scottish government research programme.

The surprising suggestion by Prof Wendy Russell, at the University of Aberdeen, comes from research on the protein content of invasive plants that have to be doused with herbicides or burned back to keep them under control.

Gorse contains 17 percent protein and broom has 21 percent protein, she said, adding: “Gorse and broom were fed to cattle at times when crops failed in the past, so we think protein from these types of plants could be used as animal food. If protein isolates are produced in the correct way, so to be safe, they could be considered as human food in the future.”

Gorse “is actively being removed from marginal lands—it’s something we can gain protein from at no extra cost.”

“The whole point about gorse is it is actively being removed from marginal lands—it’s something we can gain protein from at no extra cost,” she said. “We have a huge amount of gorse all over Scotland and when we did the calculations, just by active removal from marginal land, there’s enough gorse protein to easily feed [Scotland’s] population.”

Livestock and fodder production occupies 83 percent of the world’s farmland but produces only 18 percent of protein. It also has a very heavy environmental impact, driving the climate crisis and pollution. Studies have shown sharp cuts in meat eating in rich nations are needed to halt global heating.

From 1950 to 2000 the global population doubled, but meat intake increased fivefold, said Russell. Continuing this trend in the future is not feasible for the environment, she said: “We really do have to change our diet.”

Scotland has little arable land, which is why Russell examined invasive plants on marginal land. “When you make a protein isolate from gorse, 57 percent of the total leaf protein can be recovered at up to 95 percent purity,” she said. “We’re using about 4.5 to 6 kg of CO2 to produce [a kilogram of] isolate, compared to an average for meat of 102 kg of CO2.”

Fifteen Scottish farmers also planted hemp this year for the first time, Russell said. “They’re really concerned about the climate and want to do their best. They really are optimistic about the commercial viability of the crop and its climate credentials.”

“These alternative plant proteins are very healthy, high protein, high in fibre, and high in micronutrients.”

Prof Robin May, the chief scientific adviser at the FSA said: “There is a huge potential for novel proteins to have massive benefits in terms of environmental benefit, nutritional benefit, and access of a wider population [to good food]. Our priority is to do everything possible to help businesses get those novel, innovative products safely onto the shelves as swiftly as possible.”

May said that while many people were reluctant to try new products, such as lab-grown meat, a quarter said they would change their minds if they were confident it was safe and well regulated. “That’s where we play a key role,” said May.

Lab-grown meat went on sale for the first time in December 2020 in Singapore. Proponents say they are produced in clean facilities and do not carry the risk of bacterial contamination of meat from livestock.

Neil Shah, at the Edison Group investment research firm, which published a report on lab-grown meat on Monday, said: “The cultivated meat industry is booming as a result of increased appetite for ethical and environmentally friendly alternatives to conventional meat. The sector has already begun attracting significant investor interest as it offers the chance to enter an industry which could disrupt the global meat market over the coming decades.”

A 2019 report by consultancy AT Kearney predicted that most of the meat people eat in 2040 will not come from slaughtered animals.