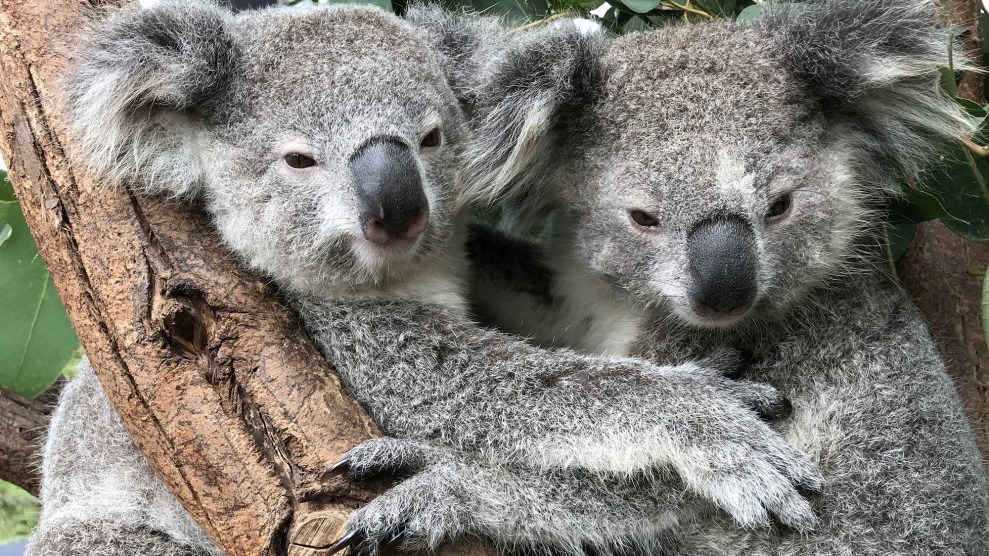 A Koala pair snuggles for warmth at the Australian Reptile Park in June 2021.Zuma Press

The Australian government has officially listed the koala as endangered after a decline in its numbers due to land clearing and catastrophic bushfires shrinking its habitat.

The environment minister, Sussan Ley, accepted the recommendation of the threatened species scientific committee that the koala populations of Queensland, New South Wales and the Australian Capital Territory should have their conservation status upgraded.

The stronger listing under national law is recognition that the koala’s plight has become more urgent and that successive Australian governments have failed to turn the much-loved animal’s circumstances around since it was listed as vulnerable in 2012.

It comes after the Morrison government last month announced $50 million to help the species. The funding was welcomed by environment groups but described as a “drop in the ocean” if the root causes of the species’ decline were not addressed.

Ley said in addition to the endangered listing, the government planned to adopt a long-awaited national recovery plan for the koala. “Today I am increasing the protection for koalas in NSW, the ACT and Queensland, listing them as endangered rather than their previous designation of vulnerable,” she said.

“The impact of prolonged drought, followed by the black summer bushfires, and the cumulative impacts of disease, urbanisation and habitat loss over the past twenty years have led to the advice.”

Environment groups have long argued the koala’s conservation status should be upgraded. Three organizations—Humane Society International (HSI), WWF-Australia, and the International Fund for Animal Welfare—nominated it for the endangered listing.

A recovery plan was considered crucial to protect the beloved species, but over nine years, no Australian government developed one.

“The koala has gone from no listing to now being declared endangered on the Australian east coast within a decade,” said Dermot O’Gorman, WWF-Australia’s chief executive. “That is a shockingly fast decline for one of the world’s most iconic animals. The endangered status is a grim but important decision by minister Ley.”

“There is still time to save this globally iconic species if the uplisting serves as a turning point in koala conservation,” O’Gorman added.  “We need stronger laws and landholder incentives to protect their forest homes.”

The endangered listing will provide additional protection for koalas because it lowers the threshold at which a development must be assessed under national laws for potentially significant impacts on the species. The recovery plan sets out the key threats to the koala and actions needed to prevent its extinction.

Such a plan had been identified under national environmental laws as a requirement for the species for the past nine years but no Australian government had developed one, making it one of almost 200 recovery plans for Australia’s threatened species and habitats that were overdue.

It took the black summer bushfire disaster to prompt consultation on a draft, with a final version delivered to the minister late last year. Once a recovery plan is adopted, ministers are legally bound not to make decisions that are inconsistent with it, however governments have no obligation to actually implement the plan.

The koala is under pressure from multiple ongoing threats including disease, global heating and clearing of its habitat for development. In 2020, a NSW parliamentary inquiry found the species would be extinct in that state by 2050 unless governments took urgent action to protect its habitat and turn the declines around.

Although “devastating for the koala” the new designation is “a cue for governments really to take a stand against continued habitat clearing.”

Alexia Wellbelove, a senior campaign manager at HSI, said Ley’s decision should prompt Australian governments to do more to address the declining state of the country’s environment. “Although it’s devastating for the koala it’s an important action for their protection,” she said. “It’s a cue for governments really to take a stand against continued habitat clearing for koalas. We can’t just continue business as usual.”

Wellbelove said the decision needed to be followed by action on the review of national environmental laws by the former competition watchdog head, Graeme Samuel. Samuel found Australian governments had comprehensively failed in their duty to protect the environment and the country’s iconic wildlife had suffered because of it.

He made 38 recommendations to transform the act, including a proposal for new national environmental standards that require clear outcomes for Australia’s plants and animals. “Until such time that we have strong national environmental standards that specify no-go areas around critical habitat for species such as the koala, habitat destruction will continue and this must be addressed urgently,” Wellbelove said.