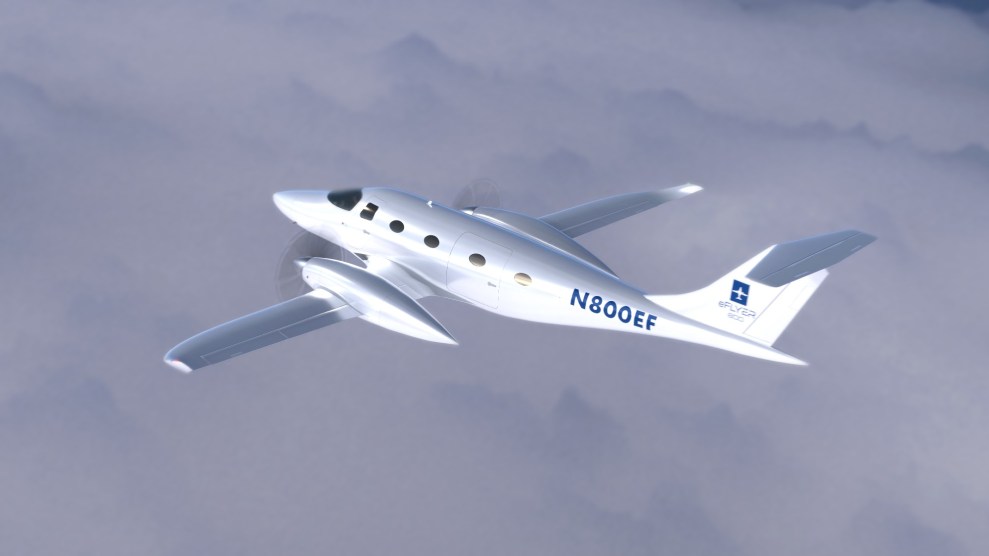 A few years ago, while driving on a stretch of interstate between Pittsburgh and San Francisco, Venkat Viswanathan began to feel a little existential. His trip was going smoothly—almost too smoothly, he thought. He would hum along for a few hundred miles at a time, stopping briefly for meals or to take in the early summer scenery. It was the classic Great American road trip. And it was hardly remarkable at all that he was doing it in an electric car.

Viswanathan, a scientist at Carnegie Mellon University, is an expert in high-energy-density batteries—designs that are meant to pack a lot of juice into not a lot of space. At times, this involves chemistry that can feel almost fanciful; the unobtanium of battery tech. But after that summer being propelled cross-country by a totally obtainable battery, he began to consider a different application for his work. “I was like, ‘Wait, what am I doing with all these new batteries I’m inventing?’” Viswanathan recalls. “Who is going to need them?” There was another way to travel coast-to-coast, he realized, one that batteries were far from decarbonizing: flight.

As they approach their theoretical limits, lithium-ion batteries remain well short of the storage capacity most aircraft would require.

Over the past few years, the battery industry has largely focused on cars, yielding steady, incremental improvements to a particular scientific approach. This involves lithium ions that move between a cathode composed of a few metal oxides—including nickel, cobalt, manganese, and iron—and an anode made of graphite. This classic recipe has gotten pretty good. Recently, lithium-ion batteries have pushed the range of passenger cars past 400 miles—about as good as many combustion engines, and enough to overcome the “range anxiety” that might make some drivers reluctant to go electric. But as they approach the theoretical limit of how much energy they can store, lithium-ion batteries remain well short of what’s required for most aircraft.

The aviation industry has been grappling with this problem for a while. The industry contributes about 2 percent of global carbon emissions—a relatively small figure, but one that is poised to grow sharply as more of the world takes to the skies. (Only about one in 10 people take a flight each year, and a 2018 study estimated that 1 percent of the world’s population is responsible for half of aviation emissions.) If those planes are going to go electric, Viswanathan believes, batteries will need a radical rethink. Even regional jets meant for relatively short hops require batteries that are light but sufficiently powerful. They need enough power for takeoff, then enough energy to safely cruise over long distances. It’s possible that it will never be practical—and that greener aviation will require other approaches, like hydrogen or synthetic jet fuel.

Or by rethinking some battery fundamentals. Last week, along with other battery and aviation experts, Viswanathan published in Nature what he considers a “wake-up call” to the industry to invest in basic science beyond moving around lithium ions. In particular, the authors advocate for new cathodes involving more exotic materials, some of which produce what are known as conversion reactions, which move more electrons and can potentially pack more energy. It’s stuff that people haven’t really considered since the 1970s, when cobalt started to win out. The US Department of Energy project has set a goal of building a battery that can hold 500 watt-hours of energy per kilogram. Viswanathan and his coauthors think that for a workhorse of the skies, like the Boeing 737, we’ll need to double that, and we’ll need new chemistries to get us there. “We’re trying to move the goalpost,” he says.

The lithium-ion battery is a chemical love story. Lithium ions and electrons, once separated from each other by a charge, always seek to be reunited. The wandering of these electrons across a battery cell is what generates a current. But in that sense, lithium is limited because it has only one electron to give up. In theory, more electrons moving around would mean more energy, which is something other elements can potentially offer. Try iodine, maybe, or sulfur or fluorine, and you can get more electrons buzzing.

But there’s a wrinkle in this plan. A beautiful thing about current batteries is that lithium ions can move back and forth without causing a fuss. They’re caught and released by the cathode—a process called insertion—but once inside of it, the ions don’t react with the other materials and reorganize the atomic arrangements. For some other elements, that’s not the case. “We have new materials that weren’t there to begin with,” says Esther Takeuchi, a battery scientist at SUNY Stony Brook. Hence the term “conversion reaction.” These chemical reactions are complicated, and they result in electrochemical changes, as well as changes in volume. But perhaps the biggest problem is then getting these types of batteries to recharge. Once you’ve changed what’s inside a battery, it can be difficult to return to the materials that were there before.

For the kinds of batteries Takeuchi works on, recharging isn’t typically necessary. Her specialty is packing lots of energy into small spaces, like medical devices, that need to last a long time on a single charge—a lifetime even, because a recharge or battery swap might require surgery. One of her older designs, involving vanadium, is ubiquitous today in pacemakers. But since then her team has studied how conversion chemistries, like fluorinated carbon (referred to as CFx) or iodine, might work even better.

For planes, the same principle of space- and weight-saving applies to staying aloft over long distances. But a battery that has only a single life won’t work for a plane that needs to recharge with every leg. In the lab, researchers have had some success in reversing those conversion reactions, but only to face other problems. One of the contenders that’s furthest along is the lithium-sulfur battery—a highly desirable chemistry because of how cheap and plentiful sulfur is. The issue is that unwanted reactions can occur between the sulfur at the anode and in the electrolyte. This can create chemical buildup that means the battery loses its ability to recharge over time. Sometimes, those reactions form a pesky thing called a dendrite—a vein of material in the electrolyte that gradually extends and may eventually connect the anode and the cathode, causing a short-circuit—and a fire.

While conversion reactions involve a lot of novel chemistry, Takeuchi points out that they do not totally ditch the path batteries have taken so far. Any new cathode chemistries will also depend on the success of nearer-term improvements to battery capacity, such as new anodes made of materials other than graphite.

“Sometimes people ask if this is even possible in our wildest dreams…When we look at the numbers, we say, ‘Yeah, it is.’”

One of those is lithium metal. While graphite was a good choice because of its stability, lithium metal has some improved electrochemical properties, and it simply takes up less space than conventional designs. Richard Wang, CEO of Cuberg, a lithium-metal battery startup recently acquired by Northvolt, a Swedish battery manufacturer, says its design gets a 70 percent boost in energy density. Wang decided to focus his startup on the aviation industry because it would place higher value on energy density improvements. The company’s idea is to power relatively small aircraft; they have partnered with startups that want to make vertical liftoff vehicles that can operate over a short range.

It’s possible those lithium metal anodes could be paired with more experimental cathode chemistries to power larger aircraft, but the path is uncertain, Wang says. It’s a classic pickle: Plane makers want certainty that big-leap technologies will work out, while the battery startups (and their potential funders) need assurances that their experiments will eventually have a use. The truth is that plane makers may find it less useful to electrify bigger planes, he says. They might decide to stop with batteries that handle short regional routes. For longer routes where existing batteries are less practical, there might instead be hybrid approaches, where a gas engine takes over between takeoff and landing, or greener jet fuels, or perhaps hydrogen, if the infrastructure gets sorted out along with a green way to produce it. No one is sure just yet where to place their bets.

George Bye, the founder of Bye Aerospace, calls that the “white space” of electric plane innovation. He draws a solid line of progress for lithium-ion batteries that power small electric aircraft, like the two- and four-seat training planes his company builds, and after that a dashed line of lithium-metal and other almost-there innovations, like solid-state batteries, that will stretch out the capacity and distance that electric aircraft can fly. Then, after that—who knows? White space. His own company has explored lithium-sulfur for larger aircraft, but found it not quite ready for prime time. “It’s a little bit behind,” he says; one partner working on the technology recently went bankrupt.

One silver lining, Bye says, is that the weight and balance benefit of replacing a complicated jet engine with an electric battery means the plane can be designed to move more efficiently through the air. That helps extend the range and passenger capacity. “It’s not apples to apples, as some people like to say,” he says. The company is also working toward FAA certification on its training aircraft, so that it can begin delivering the hundreds of orders it has received from flight schools and airlines. Among the challenges is proving that the plane can handle fire risks—a matter not just of chemistry, but the structural design of the battery packs—and still pull an emergency landing even if a battery blows.

Large electric planes with radically new batteries may be decades away. But Takeuchi maintains that there is “room for optimism” for battery-powered jets. “Sometimes people ask if this is even possible in our wildest dreams,” she says. “And when we look at the materials and we look at the numbers, we say, ‘Yeah, it is.’” She and her coauthors point out that the future of aviation was initially electric. In 1884, the first round-trip flight by an aerial vehicle—the airship *La France—*flew by the power of a massive zinc-chlorine battery. Nearly a century and a half later, she thinks electric is ready for a comeback.