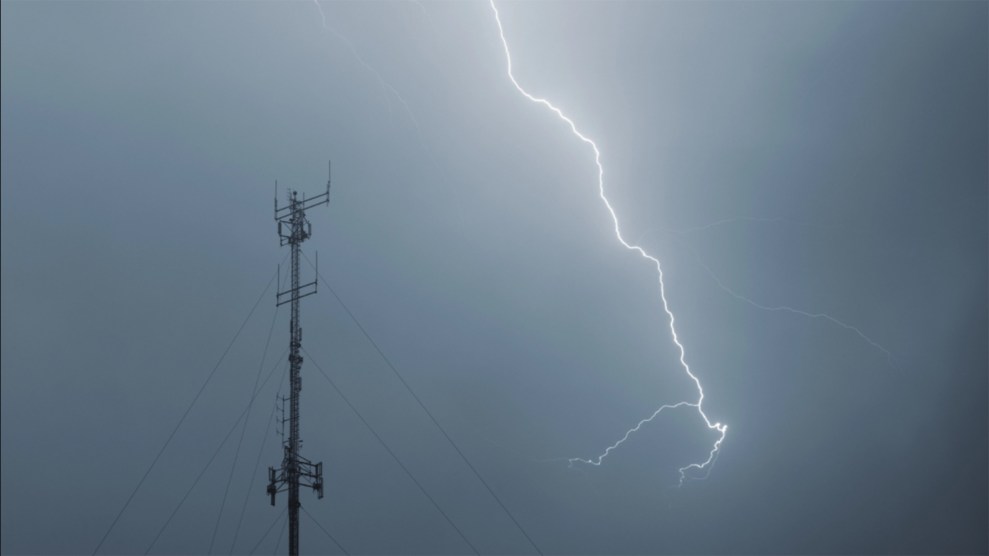 When you hear wireless internet providers talk about “expanding the 5G cellular Network,” your first thought is probably, “Oh good.” That’s because there’s a lot of wireless data streaming to the world’s many smartphones, tablets, and laptops. But scientists are increasingly worried that all that mobile device bandwidth will come at a cost—our ability to forecast the weather quickly and accurately.

While most people know that they’re paying their wireless provider to connect them to the internet, they may not realize that wireless providers are tapping into a finite resource: a narrow band of radio frequencies known as spectrum (not the cable company). Spectrum-range radio wavelengths are unique for a few reasons. For one thing, they can transmit data through solid objects—such as the walls of your house or windows of your car—making them ideal for wireless communication. But they are also important because the Earth’s atmosphere naturally emits radio waves, which can be picked up by satellite sensors and translated into weather data like temperature and precipitation.

The problem is, the radio wave frequency used by wireless cellular networks is similar to the ones used to monitor atmospheric conditions; the 24 GHz band is increasingly being used for telecommunications—notably for 5G cellular networks. The nearby 23.8 GHz band is reserved for scientific purposes, including weather satellites. As these two spectrum bands come under greater use, they can interfere, making the dissemination of weather and climate information slower and less accurate.

Wireless data bandwidth can be a bit like a highway in a growing city. Unless more highway lanes are added as the population grows, traffic will get worse. As more and more people receive wireless service, the signal can slow if companies don’t look to expand bandwidth for mobile devices. As a result, many companies are asking the FCC to auction off additional spectrum bands for wireless communications.

But atmospheric scientists say auctioning off additional spectrum bands could reduce their ability to give communities a heads-up about extreme weather events like hurricanes and tropical storms—events in which time is of the essence in order to save lives.

“This would degrade the forecast skill by up to 30 percent,” said Neil Jacobs, former acting administrator of the National Oceanic and Atmospheric Administration (NOAA), in a 2019 federal hearing about interference between cellular and scientific spectrum bands. “This would result in the reduction of hurricane track forecast lead time by roughly two to three days.”

Precise and timely information about the weather is especially important in our age of extreme weather. In 2012, for example, the National Hurricane Center was able to give the state of Louisiana an accurate prediction for when and where Category 1 Hurricane Isaac would make landfall about two days in advance of the storm. The original warning came five days in advance but misestimated the location of the landfall by 250 miles. The two-day lead time still gave the Federal Emergency Management Agency and the state time to alert people about the risk and make evacuation orders.

In the end, the storm resulted in about $612 million in damages and at least 5 deaths in the state. Without that forecast correction, it’s likely many more lives would have been lost.

Predicting the timing and trajectory of storms is tricky—and depends on the same band of spectrum that 5G providers covet.

But getting a storm’s theoretical timing and trajectory right is notoriously tricky. Atmospheric water vapor—a crucial component in weather forecasting and climate modeling—primarily releases radiation in the 23.8 GHz frequency spectrum band. In a 2021 hearing before the House Committee on Science, Space, and Technology, David Lubar, Senior Project Leader of the Civil Systems Group at the Aerospace Corporation, described the water vapor monitoring as “trying to hear a whisper in San Francisco while standing 500 miles away in San Diego.”

For this reason, federal law and international agreements state that the 23.8 GHz spectrum band should be reserved for earth science and radio astronomy observations only. Sensors on some satellite systems operated by the big federal agencies like the National Atmospheric and Ocean Administration, or NOAA, and National Aeronautics and Space Administration, or NASA, are designed to pick up these signals. Interference from adjacent spectrum bands—also known as “out-of-band” emissions—has been a concern of the remote sensing community for quite some time. For satellite sensors that rely on incredibly sensitive measurements to provide accurate weather forecasting data, this problem is magnified.

Scientists, however, have felt left out of the decision-making process as the FCC continues to auction off nearby spectrum bands for commercial uses.

“The FCC process is very complex and confusing for the scientific community, and most scientists do not have the resources available to them or advocates for such a process,” Bill Mahoney, Director of Research Applications Laboratory at the National Center for Atmospheric Research, said in the same hearing.

But there are things the government could do to limit spectrum band interference. Following a 2019 auction in which the FCC issued 2,904 commercial licenses to use the 24 GHz spectrum band, the commission proposed limits on spectrum interference. But these out-of-band emissions standards were significantly less stringent than what the scientific community had advocated for.

As a result, experts say commercial spectrum interference could bring US weather forecasting accuracy back to levels not seen since the 1970s.

This loss in weather forecasting accuracy could also be quite costly. While the FCC’s 2019 auction of the 24 GHz spectrum band generated $2 billion in revenue for the Department of the Treasury, the costs from severe weather could be much greater. During the 2021 hearing, Mahoney noted that out-of-band emissions are degrading forecasting accuracy “during a period when our country is facing significant increases in billion-dollar weather disaster events.”

With commercial spectrum allocation likely to continue, some proposals have been made to protect weather forecasting accuracy despite interference. The government could limit spectrum band interference. Similar to sound-proofing a studio to make sure you don’t bother your neighbors, “out-of-band” emissions can be reduced. In the 2021 hearing, Lubar recommended adding devices to satellite sensors that “would identify the interference contamination, do some significant computation on the spacecraft, and flag that data so that it doesn’t contaminate the downstream weather process.” Presently, however, there is no funding allocated for NASA’s or NOAA’s joint satellite missions to provide such an instrument.

A spectrum mitigation plan will likely be needed as the FCC is considering future proposals to share more bands. In particular, the agency is considering sharing the 1675 to 1680 MHz frequency band. That’s the same band used by NOAA’s Geostationary Operational Environmental Satellite to provide real-time weather information—notably for severe weather and flooding.