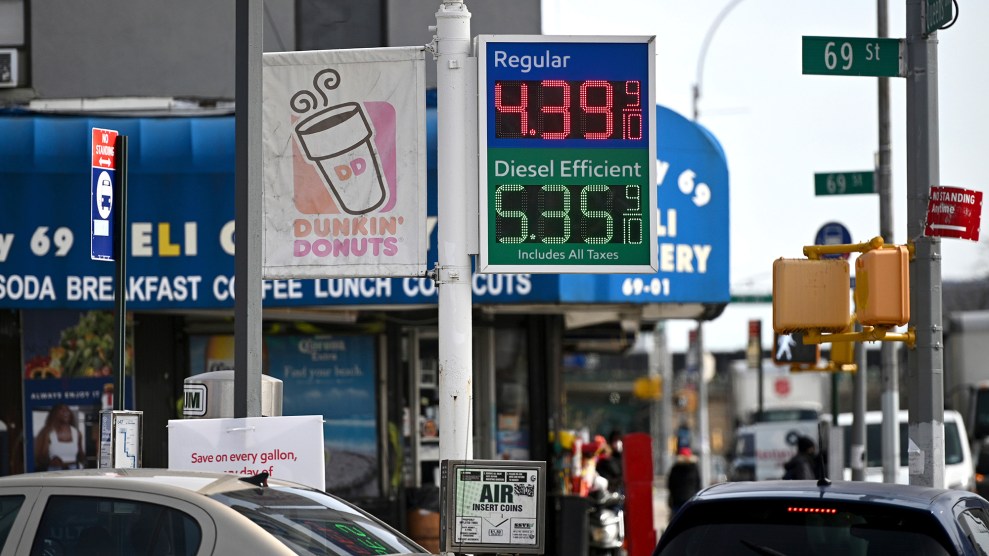 Oil and gas companies are facing a potential bonanza from the Ukraine war, though few in the industry want to admit it, and many are using soaring prices and the fear of fuel shortages to cement their position with governments in ways that could have disastrous impacts on the climate crisis.

“There is a huge opportunity for oil and gas companies, though I’m sure it is not one they would have chosen,” said Robert Buckley, head of relationship development at Cornwall Insight, an energy analysis company. “They have the opportunity to reposition themselves” as crucial to policymakers. “There is going to be a very high price for oil for a very long time, and even the prospect of physical shortages.”

Luke Sussams, of Jefferies investment bank, said: “The high-price environment is likely to last a long time. Boris Johnson has said that alongside the accelerated deployment of renewables will be greater production from the North Sea. There is the potential for growth prospects and upside [for fossil fuel producers].”

The EU, the UK, and the US have all announced drastic restrictions on imports of oil and gas from Russia, which will affect the EU most as about 40 percent of EU gas comes from Russia, but will hurt all countries as prices are set internationally. Those governments are now urgently seeking ways to protect their energy security, through ramping up renewables and seeking alternative sources of oil and gas supply.

OPEC, and Saudi Arabia in particular, are the obvious ports of call, but have been so far been reluctant to commit to increased production. This could change, as the Financial Times reported that the United Arab Emirates’ ambassador to the US favored an increase, news which sent oil prices down about 11 percent from their peak.

Given the oil industry’s timelines, even if companies begin to expand their exploration immediately it will not reduce current prices.

But the crisis gives western oil and gas companies such as BP, Shell, Exxon and Total leverage among governments. In the UK, prime minister Boris Johnson defended oil companies against calls for a windfall tax on Wednesday from Labour. He said: “The net result of that would be to simply see the oil companies put their prices up yet higher and make it more difficult for them to do what we need them to do … divesting from dependence on Russian oil and gas.”

Robin Baillie, partner in the energy group at the international law firm Crowell and Moring, said: “Governments around the world are looking for short-term solutions to finding an alternative to Russian energy, and the North Sea is an obvious one for the UK, until such time as more renewables come online.”

New oil and gas fields take years and even decades to come into production, so even if companies begin to expand their exploration immediately it will not reduce current prices. Big oil and gas companies are now awash with cash, which they could use to invest in pumping more from existing fields, and exploring new fields.

Green campaigners warned that oil and gas companies were using the Ukraine emergency to further their own interests, by encouraging governments to prioritize oil and gas production and make decisions now on investments that would have little impact on the current crisis but would vastly increase fossil fuel use for years to come.

Marc van Baal, of Follow This, a group of 8,000 green shareholders in oil and gas companies, said: “The leaders of oil and gas companies really have shown in the last years that they want to hold on to their old business model. This is what they understand—turning hydrocarbons into petrodollars. So I am afraid this is what they are telling governments they should do.”

Tessa Khan, director of Uplift, which campaigns to end North Sea fossil fuels, said: “It’s shameful that oil and gas companies, some of whom have profited from their Russian partnerships for years, now seek to use this humanitarian crisis to further their interests. The fact that they are still being listened to by governments, the UK’s included, is beyond belief.”

A stark reminder of the likely consequences of further dependence on oil and gas came from the International Energy Agency, which reported on Tuesday that greenhouse gas emissions had shown the highest ever annual increase in 2021. The global energy watchdog found that energy-related carbon dioxide emissions, which make up the bulk of greenhouse gases, had risen by 6 percent in 2021 to 36.3 billion metric tons, their highest-ever level, as the global economy rebounded from the Covid-19 pandemic, relying heavily on coal to power the growth. The increase in global CO2 emissions was more than 2 billion metric tons, the largest in history in absolute terms, outweighing the decline in emissions seen during the lockdowns of 2020.

Renewable energy and energy efficiency offer alternatives to oil and gas, which the UK, the EU, and the US are also pursuing. But if fossil fuel companies make decisions now to expand exploration and production, that will continue to result in high emissions for years and decades to come.

Lori Lodes, executive director of Climate Power, a campaigning group in the US, said: “More drilling in more places isn’t a short-term fix, it’s a long-term problem that only makes oil and gas CEOs richer and locks us into more dependence on dirty, unreliable, expensive and volatile fossil fuels.”