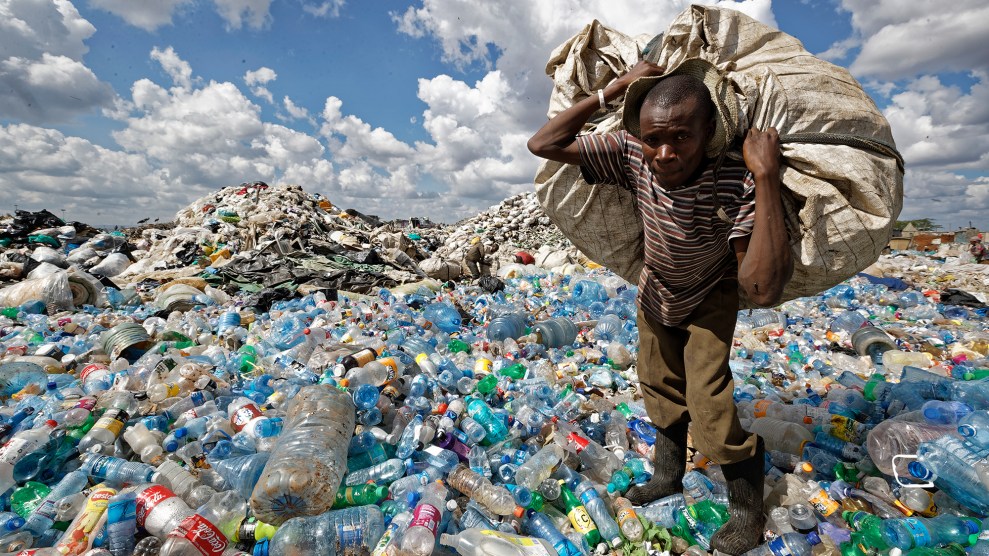 A man carries bags of recyclables to sell at the dump in the Dandora slum of Nairobi, Kenya, in December 2018. Ben Curtis/AP

World leaders, environment ministers, and other representatives from 173 countries have agreed to develop a legally binding treaty on plastics, in what many described a truly historic moment.

The resolution, agreed at the UN environment assembly in Nairobi, Kenya, calls for a treaty covering the “full lifecycle” of plastics from production to disposal, to be negotiated over the next two years. It has been described by the head of the UN Environment Programme (UNEP) as the most important multilateral environmental deal since the Paris climate accord in 2015.

Approximately 7 billion of the estimated 9.2 billion metric tons of plastics produced between 1950 and 2017 are now waste. About 75 percent of that waste is either deposited in landfills or accumulating in terrestrial and aquatic environments and ecosystems.

“Against the backdrop of geopolitical turmoil, the UN environment assembly shows multilateral cooperation at its best,” said Espen Barth Eide, the president of UNEA-5 and Norway’s minister for climate and the environment. “Plastic pollution has grown into an epidemic. With today’s resolution we are officially on track for a cure.”

Inger Andersen, the director of the UN Environment Programme, tweeted: “We have just gaveled the resolution paving the way for global action to #BeatPlasticPollution. The most important environmental deal since the Paris accord.”

“The work starts now!” she added.

Andersen described the agreement as a “triumph by planet Earth over single-use plastics” but warned that the mandate did not grant stakeholders a “two-year pause.”

“UNEP will work with any willing government and business across the value chain to shift away from single-use plastics.”

“In parallel to negotiations over an international binding agreement, UNEP will work with any willing government and business across the value chain to shift away from single-use plastics, as well as to mobilize private finance and remove barriers to investments in research and in a new circular economy,” Andersen said.

UN nations, which have been holding talks in Nairobi this week to discuss the terms for a treaty, agreed it should cover the production and design of plastic, not just waste. The resolution established an intergovernmental negotiating committee, tasked with drafting and ratifying the treaty. It will start work this year and aims to finish by 2024.

The resolution introduces provisions to recognize waste pickers, a “groundbreaking development” that would affect millions of people, according to NGOs, and the acknowledgment of the role of indigenous peoples. It is the first time waste pickers, low-paid workers in developing nations who scavenge for recyclable plastic and other goods, have been recognized in an environmental resolution.

NGOs described the resolution as a critical shift in international policymakers’ approach, which previously focused on plastic as a marine litter issue. The mandate recommends measures to tackle plastic production, predicted to almost quadruple by 2050 and take up 10-13 percent of the global carbon budget. They urged world leaders to show even more resolve in developing and finalizing the details of the treaty over the next two years.

“We stand at a crossroads in history when ambitious decisions taken today can prevent plastic pollution from contributing to our planet’s ecosystem collapse,” said Marco Lambertini, director general of WWF International.

“But our work is far from over—world leaders must now show even more resolve in developing and implementing a treaty which addresses our current plastic pollution crisis and enables an effective transition to a circular economy for plastic.”

Christina Dixon, the deputy ocean campaign lead at the Environmental Investigation Agency, said: “This resolution finally recognizes that we cannot begin to address plastics in our ocean and on land without intervening at source.”

“Fundamentally, the plastics tap must be turned off if we are serious about tackling the problem,” she said.

Dixon said the world was at the “start of a journey” towards securing a legally binding treaty.

Niven Reddy, the Africa coordinator at the Global Alliance for Incinerator Alternatives, said: “This milestone could not have happened without a global movement pushing decision-makers every step of the way.”

“The recognition of waste pickers and the vital role they play in stopping plastic pollution is long overdue.”

Joanne Green, a senior policy associate at Tearfund, said: “Today marks the first step towards justice for communities impacted by the burning and dumping of plastic waste. The recognition of waste pickers and the vital role they play in stopping plastic pollution is long overdue; governments must now ensure that they are given a prominent seat at the negotiating table.”

The treaty will be accompanied by financial and technical support, including a scientific body to advise it, and the possibility of a dedicated global fund.

The resolution was adopted with the conclusion of the three-day UNEA-5.2 meeting, attended by more than 3,400 delegates in person and 1,500 online participants from 175 UN member states, including 79 ministers and 17 high-level officials.

There is growing public concern over plastic pollution. More than 60 countries already have implemented bans and levies on plastic packaging and single-use waste, aimed at reducing use and improving waste management.

Plastic consumption in developed countries is 2.5 times higher per capita than in developing countries, according to the Planet Tracker think tank.