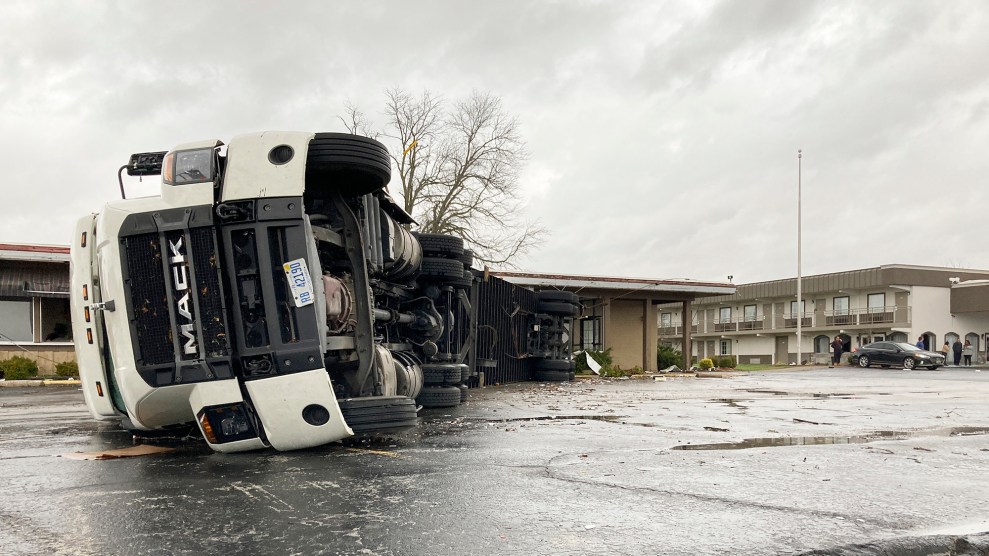 A large semi trailer is flipped over and pushed against a building in Bowling Green, Kentucky by a tornado in December 2021. Tornadoes and severe weather caused catastrophic damage and killed workers in a candle factory, Amazon warehouse, and a nursing home. Dylan T. Lovan/AP

At 5:30 p.m., December 10 of last year, they heard the unmistakable wail of tornado sirens. Some of the workers crafting cinnamon, pumpkin spice, and vanilla candles asked to go home: Western Kentucky’s Mayfield Consumer Products plant, with its vulnerable wide-span roof, was the kind of building to avoid in a storm.

Staff were first told to shelter in a hallway. But they were soon ordered back to the factory floor to finish their ten-hour shifts. Leave, managers warned, and you’re fired. The threat worked.

Mayfield’s management, according to a survivors’ class-action suit, was aware of the danger—forecasters had been predicting major tornadoes all week—and had rejected a request by floor supervisors to stop work for the day. But the firm’s other plant, just six miles away, did shut down for the storm. The difference? The first factory was working overtime to ship candles for the lucrative Christmas rush.

The company now faces a state investigation, but it doesn’t have much reason to worry: thanks to weak state and federal worker protections, companies responsible for on-the-job deaths pay an average fine of $12,000. That’s if the laws are enforced—a 2019 federal audit found that Kentucky “failed to properly investigate nearly every single worksite death” in a two-year period, and its safety record’s far from the worst.

In theory, federal laws demand a “safe and healthful” workplace, with a rulebook to cover the details: Too windy? Your boss can’t make you work on tall scaffolding. Handling live wires? You’re entitled to good safety gear. But no rule or law kept Mayfield from packing the factory floor throughout what Gov. Andy Beshear called the “strongest set of tornadoes” in Kentucky’s history.

Those workers weren’t alone in risking their lives for their jobs—far from it. Runaway climate change is making extreme weather more common and deadly, bringing new dangers to work we’ve thought of as safe. Twisters are striking in new territory and throughout more of the year, especially in the Midwest and Southeast. That’s also true for flood-level rains, which adds hazards to ordinary commutes, let alone trucking or car-based gig work. Full-time drivers have to weigh those risks against hungry kids or the threat of eviction—a section missing from the DoorDash manual. Further west, wildfires are driving extreme air pollution, a killer for the millions of Americans who work outdoors. And for workers everywhere from Big Ag to Amazon, longer, hotter summers are already costing lives.

That’s where the Occupational Safety and Health Administration, the country’s chronically underfunded workplace watchdog, is supposed to come in. OSHA writes, enforces, and (ideally) revises that nationwide job-safety rulebook. But since its inception in 1971, it’s been subjected to right-wing legislative, fiscal, and PR assaults, with workers’ lives in the balance. It has fewer than 1,000 inspectors to monitor some 10 million worksites. Its new rules need Congress’ approval, making them easy to gut or kill and keeping it far behind the times. And, crucially, the agency was chartered almost 20 years before the first Congressional hearing on climate change. Deeply unequipped for an age of climate disaster, OSHA is leaving workers to ride out the storm on their own.

Tornadoes, immediate and terrifying, tend to make the news. But for the typical worker, climate chaos’ most likely—and insidious—threat is harder to see: heat. The past seven years have each been the hottest on record, and recent summer heat waves have broken records as well. It’s especially dire in regions less used to extreme heat, like the Pacific Northwest, where last year’s unprecedented hot spells claimed hundreds of lives. In its current state, OSHA is particularly badly prepared for a long-term uptick in heat. In fact, the agency doesn’t have heat regulations. Companies aren’t required to provide extra breaks or accommodations for extreme heat (although there is a water standard). As death tolls soar—three decades ago, heat was half as likely to be the reason for an on-the-job death—the agency has actually cut down on excessive heat investigations.

In fairness, after summer 2021’s heat waves caused a record number of deaths, President Biden’s OSHA started on a federal heat standard—though it could take years to craft and would unquestionably die in a Republican Congress. Under another Biden initiative, the agency must now prioritize workplace inspections when daily temperatures exceed 80 degrees.

In a statement, OSHA assistant secretary Doug Parker said the agency is “taking several measures to protect workers better in hot environments and reduce the dangers of exposure to ambient heat,” calling heat safety a “top priority.” Parker pointed to an enforcement initiative on heat-related hazards and a variety of advisory campaigns, such as one appealing to employers to “engage their workers, listen to their ideas.” The heat rule in the works, Parker says, would provide a “longer-term solution,” providing “additional tools to enforce requirements,” albeit within the strict limits current law imposes on new work-safety rules.

Other problems still plague the agency. In 2020, with Covid pushing OSHA complaints to record highs, the agency counted 862 investigators—fewer than it had in 1975, when it dealt with a third of its current workload. In 2019, late in the Trump administration, the number hit an all-time low: 752 inspectors for 130 million workers.

That makes inspections rare and compliance tough to enforce, especially when OSHA faces high-powered corporate appeals and objections. Penalties are often bargained down by employers who promise to remedy the situation or take a work-safety class. That’s been true since before OSHA existed: near the end of the Congressional fight over the bill that established the agency, the Senate passed a version that could have saved the Mayfield workers and countless others. OSHA, via the Labor Department, would have been able to shut down facilities where workers were in imminent danger. A factory forcing overtime amid massive tornadoes would have been an obvious target. But an eleventh-hour push by House conservatives stripped that power from the final bill, denying millions of workers a lifeline. There’s no better example of what OSHA could have been—and could become.

Even if the agency had an army of inspectors, serious violations, like failing to report a string of injuries, cost companies less than $15,000. Only “willful or repeated” violations hit six figures, capping at just over $145,000. Congress also bars OSHA from raising its penalties by more than 50 percent per year, making it practically impossible to ever set fines that would worry corporations like Amazon. Those are amounts, says National Employment Law Project analyst Anastasia Christman, that “bigger businesses can simply put into the calculations as a cost of business.”

In Mayfield’s case, the Kentucky Center for Investigative Reporting found that the company had been charged with seven serious safety violations in 2019 alone. The company contested them all. And while OSHA has tornado recommendations, they’re just that—recommendations, like its heat guidelines.

As Covid-19 rippled across the country, OSHA again gave employers non-binding safety suggestions, though it could have issued six-month emergency rules. A federal audit found that OSHA conducted half as many investigations in 2020 as in 2019, despite spiking complaints of inadequate PPE, zero social distancing, and major virus outbreaks at job sites. When OSHA did order inspections, the audit found, they weren’t conducted onsite—raising concerns that major hazards, Covid-related or not, were going undetected. All that as Covid killed hundreds of thousands of Americans, from meatpacking workers and their families to fruit pickers to postal workers. We don’t know how many people an agency with better protections, support, and staffing could have saved. But we do know that climate change won’t be any gentler.

And as with Covid, it’s low-wage workers, often workers of color, who bear the brunt. On the typical Amazon warehouse floor, three out of four workers are nonwhite. In 2019, when wildfires threatened tony Brentwood, Los Angeles—where the average house runs more than $2,000,000—numerous homeowners evacuated without a word to housekeepers and gardeners, many of whom still showed up to work. (85 percent of Brentwood homeowners are white; most of their household workers hail from Mexico and Guatemala.) In the last decade, a third of workers killed by heat were Latino, twice their proportion of the workforce. And at wages of $8 to $11 an hour, few Mayfield workers could have stayed home as long as the plant stayed open.

Last year, for a moment, OSHA’s future looked brighter. Adding workplace inspectors was a Biden campaign promise, and its 2022 budget rose by just over 10 percent—not enough for a real overhaul, but a start. (Congress, to its credit, also stymied Donald Trump’s attempts to slash that budget.) And the House version of Democrats’ Build Back Better Act promised the agency a 20 percent funding boost over five years, with which it could update standards, recruit inspectors, and manage whistleblower investigations. It would also have significantly raised penalties for major safety breaches: $70,000 for a serious violation, and more than 10 times that for serious and repeated ones. But the bill is now dead, and OSHA remains defanged.

Workers like Mayfield’s are invisible from Capitol Hill, where climate change and labor law feel less like issues of life and death. One survivor of the storm, 21-year-old McKayla Emery, had come in early for her night shift that Friday; she was pushing to hit Mayfield’s Christmastime minimum of 50 hours per week. When the tornado decimated the building, Emery spent six and a half hours pinned beneath rubble, comforting a dying friend the whole time. Scars and deep nerve damage now run along her whole body.

Like many at the plant, Emery was a temp. She’d started less than three weeks before the disaster, putting her worker’s compensation at $270 a week—hardly enough to pay the bills. For some survivors, she says, it’s even less. Each new treatment puts her through an arduous process with her insurer. Many involve a 5-hour round trip to specialists in Nashville.

“I’m really just struggling financially, on top of the mental and physical,” she told me. She says she’s grateful for community members’ support—rides to the doctor, help paying her bills—despite their own devastating losses. I asked whether her former employer could have done anything to help. “Girl,” she said, “they could have just told us not to come in to work.”