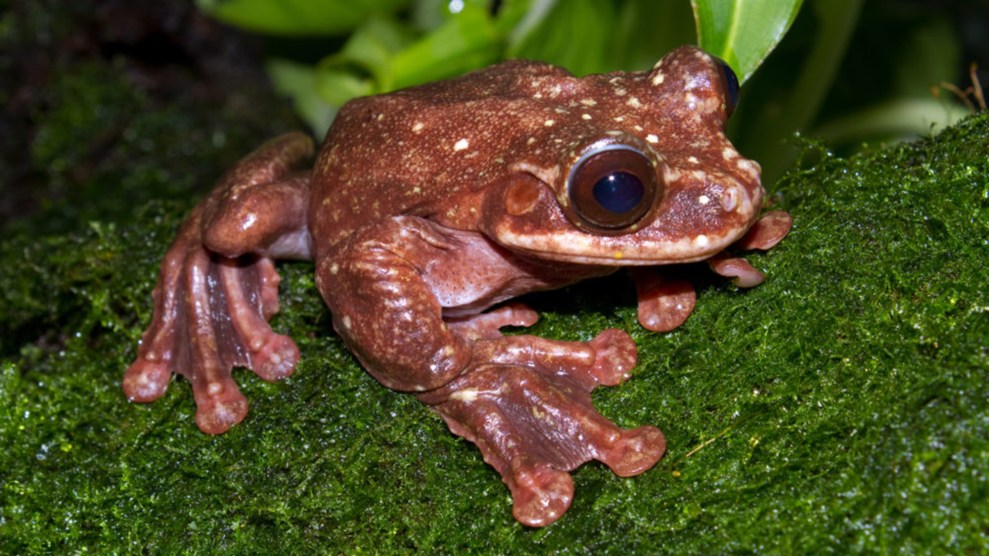 Sound is made of the most ephemeral stuff on Earth, insubstantial tremors of air. Yet sound is also the great connector and revealer. Because sound waves pass through and around obstacles, they link living beings into sonic information networks. Some of these networks are communicative—songs, music, and speech—and some amount to eavesdropping—predators and competitors listening to one another as they breathe, move, and eat. Listening, then, can reveal the unseen dynamics of the living world. In a time of crisis and rapid change, listening offers us a powerful way to connect and understand.

But what we hear is often sonic loss. Some of this loss is erasure through species extinction. The song of the Kauaʻi ʻōʻō, a honeyeater bird from Hawaii, or the Rabbs’ fringe-limbed treefrog from central Panama will never again ring through forests. Another form of loss is the diminished sonic diversity of habitats: a reduction in the variety of melodies, the richness of layers of different sound frequencies, the range of different tempos, and the temporal variability of sonic expression through daily and seasonal cycles.

Tree plantations or row crops are acoustically bland and anemic compared to the vigor and lush sonic variegations of a forest abounding in diverse life. Excess engine and industrial noise also causes loss of sonic diversity by smothering other sounds and fragmenting the acoustic links that formerly linked populations and communities. And then there is the loss caused by our inattention. When we cease to listen, the richness of human sensory experience, a necessary foundation for right action, is eroded.

Every habitat on Earth has its own sonic signature, made of the thousands of voices present at each place. It took a long time for this sonic diversity to emerge. Predation likely kept a lid on sonic communication for hundreds of millions of years. The first animals in the oceans and on land could hear, especially in the low frequencies. To sing or cry out was therefore to invite death. To this day, vocal creatures are those that can quickly escape or defend themselves. The frog, cricket, and bird owe their songs, in part, to their jumping legs or wings.

Once communicative sound evolved, starting with ocean fishes and crustaceans and cricket-like insects on land, the creative forces of evolution soon diversified sound, taking simple cries and building the complexity and nuance that we hear around us today. These creative evolutionary processes worked over many time scales, and so sound reveals the many layers of life’s generative powers. Sonic loss erodes the legacy of these different times and diminishes evolutionary creativity and possibility for the future.

At the continental scale, plate tectonics and ancient movements of animal groups from one continent to another account for the markedly different soundscapes we encounter around the world. The bird communities of the Americas, for example, sound very different from those of Australia because only a few of Australia’s diverse assemblage of ancient songbirds left the continent of their origin and dispersed to other places. These emigrants then radiated in the new lands, each finding its own acoustic path. On each continent and in each ocean, species adapted to physical and social conditions, further diversifying sound. The songs of forest species are adapted to transmission through dense foliage and are often slower and less complex than those of species that live in open country. Sexual selection added layers of exaggeration and extravagance, causing mating songs to diverge and explore new vocal extremes.

In a few mammals and birds, social learning of sounds spurred cultural evolution and the development of highly localized dialects and vocal fashions. In some species, among the white-crowned sparrows of the Bay Area on the California coast, for example, these dialects are fine-grained, changing on the scale of kilometers, a reflection of the short dispersal distances of the young. But in sparrow species whose young disperse farther, the dialects mark out large portions of the North American continent. For sexual selection and cultural evolution, especially, sonic communication was itself a diversifying force, a social signal that accelerated local adaptation of populations and divergence of species.

Within ecosystems, loss of sonic diversity not only reflects loss of species, but also changed rhythms of life.

Now, at all these levels, we hear loss. At the global scale, distinctiveness is eroded. We’ve lost millions of singing whales and billions of vocalizing fish. In the North Atlantic, for example, the collapse of cod populations, down more than 99 percent in some areas, has eliminated most of the thrumming, grunting sounds that this species uses during the mating seasons. For whales, in the 20th century alone humans killed at least 2.9 million individuals, removing the sounds of sperm, fin, minke, humpback, and other species, turning oceans alive with song and calls into impoverished acoustic spaces.

Because every lost fish and marine mammal formerly occupied a specific habitat, their demise creates a lost aquatic geography of sound, replaced with the drone of ship engines and crack of seismic air guns in search of buried oil. On land, homogenization of species caused by recent introductions of non-native species—such as European starlings and common mynas—and eradications of indigenous species leads to the convergence of soundscapes on different continents, especially in urban and agricultural areas.

Yet, much sonic diversity remains. One way to stem and reverse the loss is to hear and celebrate distinctiveness. The “100 Soundscapes of Japan,” launched by that nation’s Ministry of the Environment in 1996, does just this, honoring both natural and cultural sounds such as bird song, wind in reed beds, or the ringing of bells. Can we now imagine such a program in every part of the world, a way to draw sensory experience into community and thus create a culture of listening?

At smaller scales, within ecosystems, loss of sonic diversity not only reflects loss of species, but also changed rhythms of life. Some of these changes are accessible to human ears—the early arrivals of migrating birds or the loss of familiar insects or frogs—but others are more readily discernible with the help of recording and sound analysis technologies. The daily cycle of insect, bird, frog, and primate calls in logged forests in Kalimantan, Indonesia, for example, differed from unlogged forests, a pattern revealed by remote recording devices and statistical analysis of sounds across many weeks. Sound therefore not only gives us a way to assess biodiversity at one time and place, its ebb and flow reveal hidden dynamics of ecosystems.

At the level of the individual, the sonic crisis manifests as either too little sound or too much noise. The regent honeyeater, for example, is now so rare in New South Wales that the cross-generational sonic connections that sustain the bird’s song have been frayed. Many of these honeyeaters encounter so few singing elders of their own species that they have no chance to learn their species’ song. Instead, they sing attenuated songs or borrow distorted snippets from other species. This bodes ill for future successful breeding.

In urban areas and in the oceans, human-caused sound levels are so high that individuals of many vocal species must sing louder and higher to be heard over the din. In the most extreme cases in the oceans, sound from seismic exploration or military sonar is loud enough to directly harm animal bodies. Even at lower sound levels, the social networks of singers in noise are partly blocked, disrupting social dynamics.

The stresses of noise affect humans, too. The first urban noise complaints date to the origin of cities, recorded on Babylonian clay tablets. Now, over half of all humans live in cities, and there we are often subjected to alarming, uncontrollable, or unwanted sound. These burdens are not borne equally. Racist and classist city planning has imposed the heaviest toll of noise on minority and low-income neighborhoods. More than an annoyance, urban noise causes stress that disrupts learning, fragments sleep, and causes physiological harm such as increased rates of cardiovascular disease.

At all these scales we have a crisis of inattention. “Not listening” is a form of sonic loss.

The sonic crisis extends from the global scale of continents and ocean basins, right down to the individual scale of singing birds and human city dwellers. At all these scales we have a crisis of inattention. “Not listening” is a form of sonic loss. The crises in which we live are not just “environmental,” of the environs, but perceptual. When the most powerful species on Earth ceases to listen to the voices of others, calamity surely will ensue.

We live embedded in systems designed to turn our attentions away from the voices of the living Earth, inward toward the human. The many ways that digital platforms and algorithms do this are well known and often deplored. Subtler are practices of unhearing in education and policy-making. We teach inside walls that exclude all living sounds from non-humans. Our curricula and lesson plans are tightly controlled, with no room for the call of a raven, the gust of wind in pine needles, or the allures of cricket song to redirect the pedagogical flow. The same is true in much of the work of corporations, governments, and even environmental organizations. Even when discussing the fate of living rivers or forests, we sequester ourselves, blocking all sensory connection, removing any possibility of learning from the very living beings whose fate we debate, let alone giving those beings the opportunity quite literally to be heard.

The vitality of the world depends, in part, on whether we turn our ears back to the Earth, hear both the beauty and brokenness of the living world, then act.