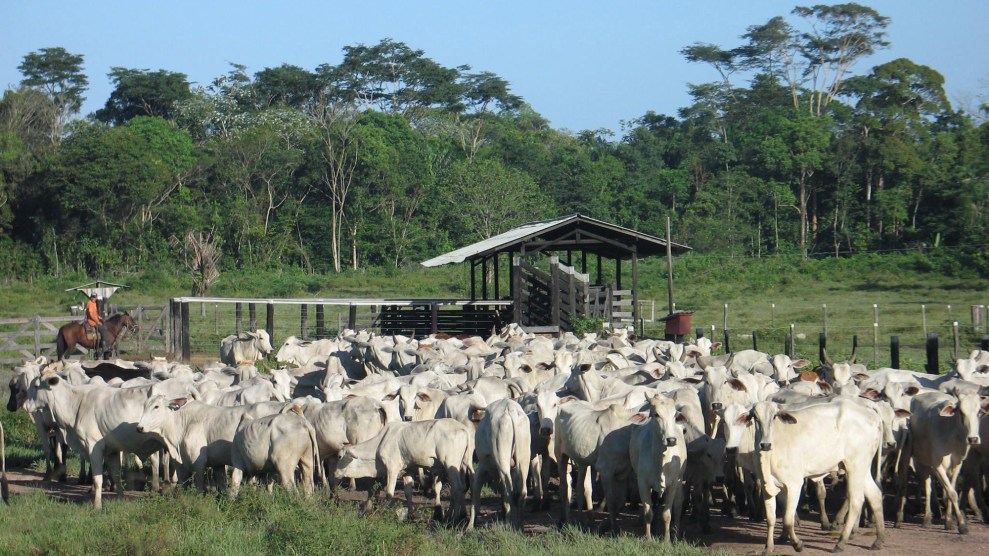 Cattle in a deforested patch of the Amazon rainforest in Brazil, where roughly 70 percent of deforested land is used for grazing.Jack Chang/TNS/ZUMA Press

Replacing 20 percent of the world’s beef consumption with microbial protein, such as Quorn, could halve the destruction of the planet’s forests over the next three decades, according to the latest analysis.

The move would also halve emissions from the global food system, by reducing the razing of trees and the methane emissions from livestock. Previous studies have found meat alternatives have lower environmental footprints but this latest analysis is the first to assess what impact that could have in the world.

Deforestation also devastates wildlife but is proving very difficult to stop. Experts say the best way is to cut demand for the products driving the destruction, such as replacing them with greener alternatives. Microbial protein is brewed in warm bioreactors, like beer, with the microbes fed sugar. The protein-rich product could taste and feel like meat, and be as nutritious, the researchers said.

Today, 83 percent of farmland is used for livestock and their feed crops, but the meat and dairy produced accounts for only 18 percent of the calories consumed by humans. The production of ruminant meat—mostly beef, but also lamb and goat—has more than doubled since 1961, but a series of studies have shown meat-eating in rich nations must fall drastically to beat the climate crisis.

People “can continue eating burgers and the like, it’s just that those burger patties will be produced in a different way.”

“The food system is at the root of a third of global greenhouse gas emissions, with ruminant meat production being the single largest source,” said Dr Florian Humpenöder, a researcher at the Potsdam Institute for Climate Impact Research (PIK) in Germany who led the study. “The good news is that people do not need to be afraid they can eat only greens in the future. They can continue eating burgers and the like, it’s just that those burger patties will be produced in a different way.”

The research focused on microbial meat as it had been produced at industrial scale for 20 years and was already available, said Dr Isabelle Weindl, also at PIK. “Even accounting for the sugar as feedstock, microbial protein requires much less agricultural land compared [with] ruminant meat.” Previous studies have shown the protein quality of microbial meat is equivalent to beef but it requires 90 percent less land and water and produces 80 percent less greenhouse gas emissions.

The study, which was published in the journal Nature, used computer models that included middle-of-the-road projections of socioeconomic factors such as rising demand for beef, growing world population, increases in income and shifts in international trade.

The 56 percent reduction in deforestation—193 million acres—resulting from one-fifth of beef being replaced by microbial protein occurred in Latin America and sub-Saharan Africa. Significant deforestation still occurred in the modelling due to the production of other foods, such as palm oil and cocoa.

The researchers found the substitution of microbial protein largely cancelled out projected rises in demand for beef, meaning new areas of pasture did not need to be cut into forests. Increasing the proportion of beef replaced to more than 20 percent resulted in diminishing returns because much of the deforestation had already been prevented, with a 50 percent replacement leading to an 82 percent cut in deforestation by 2050.

The study did not analyze the effect of plant-based alternatives to meat, but these would also be expected to significantly cut environmental impacts. Meat cultured in bioreactors from animal cells is still in early stages of development and was not included in the study because of a lack of suitable data.

Dr. Tilly Collins at Imperial College London, who was not part of the study team, said: “While the predictions of these models depend strongly on our ability to deliver such protein substitution, there is no doubt that the efficiency of biotech-enabled alternatives offers huge future potential for more sustainable food provision.

“Governments and food production business need to coordinate to develop appropriate standards [for microbial protein] and thus future public confidence. Our nuggets may never be the same again.”

The bioreactors used to create microbial protein require heating, and using high-carbon sources of electricity would offset part of their benefit, but green electricity is expanding quickly as costs continue to fall.

Humpenöder said: “Microbial protein should not be seen as a silver bullet, but rather as a building block in a large transformation of the whole food and agricultural system, combining it with reductions in food waste, incentives to eat healthier, and de-incentivizing the sale of products with high environmental impacts.”