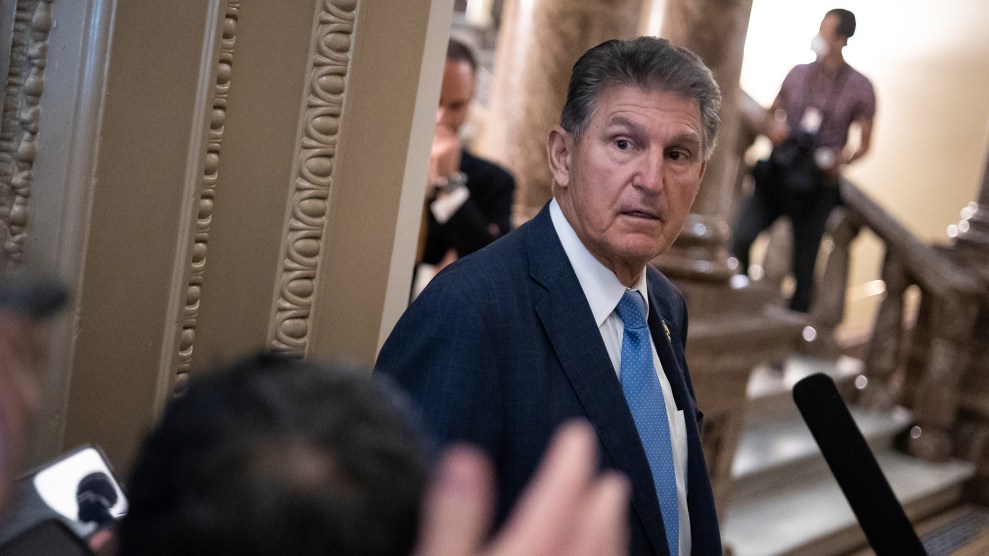 Taking on the fossil fuel industry in West Virginia was always going to be a David v Goliath type battle, but after years of protests, lobbying and lawsuits, 68-year-old Becky Crabtree thought the community-led resistance had beaten the Mountain Valley pipeline (MVP) in a fair fight.

So when news broke earlier in August that the state’s fossil-fuel friendly senator, Joe Manchin, had resurrected the beleaguered pipeline, Crabtree, a high school science teacher who teaches students about the climate crisis, felt “numb.”

Manchin, a conservative Democrat who receives more campaign financing from the fossil fuel industry—including pipeline companies—than any other lawmaker in Congress, had agreed to back his party’s historic climate legislation before the crucial midterm elections. But only after he negotiated a side-deal to fast-track the MVP. “It’s the unfairness that makes me so angry. It’s a deal with the devil,” said Crabtree, 68, who owns a 30-acre sheep farm in Lindside, Monroe County.

“These companies are wrecking our climate and raking in record profits, and more federal help is the last thing they deserve.”

The deal is a sweet one for the pipeline’s supporters. Democratic leaders agreed to advance separate legislation in September that would “require the relevant agencies to take all necessary actions to permit the construction and operation of the MVP and give the DC circuit jurisdiction over any further litigation.”

This could help the pipeline company circumvent judges who have suspended construction and overturned permits over environmental concerns, and have future legal cases heard in an appeals court in Washington, which is considered more favorable to developers.

It’s part of a broader set of concessions negotiated by Manchin to diminish environmental protections and expedite permits and construction of pipelines and other energy infrastructure, limiting legal challenges by concerned communities and environmental groups.

It also mandates new oil and gas drilling deals in Alaska and the Gulf of Mexico—places that environmentalists have also fought in court to preserve. Any public lands given over to solar and wind developments must be accompanied by millions of acres handed to oil and gas—tying the US to planet-heating energy projects for decades.

Brett Hartl, a campaigner at the Center for Biological Diversity, said the side-deal was a “vile tribute” to the fossil fuel industry. “These companies are wrecking our climate and raking in record profits, and more federal help is the last thing they deserve.”

Campaigners also warn that the slew of concessions will sacrifice another generation of Black, Latin, Indigenous, and low-income communities, who will bear the brunt of air pollution, noise and displacement from the new projects.

Still, many experts argue that the concessions were worth it to secure the country’s first ever climate legislation, which provides $369 billion for the transition to electric vehicles and renewable energy—a historic investment that scientists estimate will lead to net reductions of 40 percent by 2030, compared with 2005 levels.

“Hearing the news was like getting sucker-punched. I will never vote for Manchin again.”

For those who will be directly affected, the trade-off is a bitter pill to swallow. Crabtree, who was arrested in 2018 after trying to stop construction on her property by chaining herself to her old Ford Pinto, said: “I understand how compromises work, and I’m glad that we finally got some action on climate change. But our communities and the environment are being sacrificed for Manchin and his friends, and that’s painful.”

The Mountain Valley pipeline would stretch 303 miles across steep forested Appalachian mountains, farmland and a thousand or so streams, rivers, and wetlands, transporting liquified shale gas from northwestern West Virginia to southern Virginia.

It will cut through karst terrain—complex geological structures created by the breakdown of soluble rocks like limestone and dolomite—characterized by springs, creeks, caves, and sinkholes. This Swiss-cheese like underground landscape has blessed the area with abundant water sources, but the porous, unstable nature of the land makes it vulnerable to contamination, according to the US Geological Survey. Recent heavy rains led to mudslides and slippage across the region, and pipeline opponents argue that putting anything volatile in the ground is too risky.

The company said it had “worked diligently to identify a route that poses the least overall impact on communities, cultural and historic resources, and environmentally sensitive areas including karst topography regions.”

Of big concern is Peters Mountain—a sprawling peak covered in oak, maple, and hickory trees with sheer drops, endangered species and breathtaking views that straddles state lines to Virginia. The pipeline would cut across the imposing mountain, which supplies clean drinking water to just over half of Monroe County residents.

“Just because Joe Manchin wants to fast-track this fossil fuel infrastructure, the facts haven’t changed. The violations, inconsistencies, and holes in the permitting are still there. This land is very vulnerable, the threat to our water supply hasn’t changed,” said Howdy Henritz, 82, a clean-water advocate and small landowner in Greenville, Monroe County, who relies on spring water. “Hearing the news was like getting sucker-punched. I will never vote for Manchin again.”

But others such as Bill Shiflet, a real estate agent, farmer and chair of the Monroe county building commission, support Manchin’s deal, and believe environmental concerns are “unfounded.” He said: “We have pipelines all over this country. Once the gas is flowing, Mountain Valley will bring in game-changing amounts of money through severance and property taxes, and will allow us to sell West Virginian gas to our allies in Europe…Shutting off fossil fuels now would be very bad news, we’re not ready.”

The project is over budget, behind schedule, and currently at a standstill because it does not have the necessary permits to cross waterways and wetlands—which Manchin wants to sidestep. Earlier this week, the company was granted a four-year extension, until October 2026, to complete the project. (The company claims that roughly 94 percent of work on the MVP is complete, but according to calculations by environmental groups the true figure is closer to 55 percent.

On the other side of Peters Mountain in Giles county, Virginia, Georgia Haverty, 82, owns 500 acres with pick-your-own apple orchards, a restaurant, a wedding venue and doggy daycare. In recent years, extreme and unpredictable weather patterns have led to crop failures, which Haverty believes underscores the urgent need to transition away from fossil fuels. “Sacrificing the planet for bigger corporate bank accounts is not a reasonable tradeoff. The problem is we’re Appalachian, [and] we don’t have any political influence,” he said.

The pipeline industry’s financial influence in Washington, however, is growing.

“If you own something and someone with more money wants it, they will take it—and the facts, regulations, and fairness don’t matter.”

So far this year, the industry has donated $331,000 to Manchin—up from $20,000 in 2020, according to federal campaign finance disclosures tracked by Open Secrets. Four Democrats are among the top 20 industry beneficiaries, who include Manchin, who has received more than the next five lawmakers put together, as well as Kyrsten Sinema of Arizona and Chuck Schumer, the Senate leader from New York who negotiated the deal for Manchin’s vote. Since 2017, Schumer has also raised at least $281,000 from the country’s largest utility, NextEra Energy, a stakeholder in MVP.

A spokesperson for Manchin said he has “always been in full compliance with ethics and financial disclosure rules’’ and “always had West Virginia’s best interest in mind.” Schumer’s office did not respond.

Haverty said that if she’s learned one thing from fighting the pipeline, it’s that money matters. “If you own something and someone with more money wants it, they will take it—and the facts, regulations and fairness don’t matter. It’s the opposite of the American dream,” said Haverty, who was among 300 residents in Virginia sued using eminent domain powers to force the pipeline on her land. A lawsuit challenging the use of eminent domain for private gain—which under the Constitution is restricted to the government taking private property for public use—is ongoing.

But it’s not over till it’s over, and the next stage of this struggle will be over permitting—which the company believes the fourth circuit court in Richmond, Virginia, that has overturned crucial permits suspending construction has got “wrong” and Manchin wants to bypass.

While some Democrats point out lengthy permitting procedures have also slowed renewable energy projects and the transmission of clean electricity across the country, the party’s progressive wing is reluctant to fulfil Manchin’s bargain.

“Polluting industries may have won that promise in a deal with a select few, but I intend to do everything in my power to convince the rest of my colleagues to break it,” said Raúl Grijalva, chairman of the House’s natural resources committee and a congressman from Arizona. Rashida Tlaib, another progressive Democrat, added that given Manchin’s previous political manoeuvrings around the climate bill “we owe him nothing now” on permits.

Like the Dakota Access pipeline on Indigenous lands at Standing Rock, the MVP could become a national call to protest, and will then come down to how much political capital and force leaders are willing to deploy. On Wednesday, more than 650 groups sent a letter to congressional leaders, calling on them to abandon Manchin’s fossil fuel side-deal.

In Montgomery County, it was a wealthy rural neighborhood on the outskirts of the city of Blacksburg, where residents first mobilized against the MVP almost eight years ago, creating pipeline monitoring networks and legal strategies that morphed into a regional and national movement.

David Seriff, 64, a telecoms account executive, and his wife Bridget Simmerman, 60, a psychotherapist, hosted the first meetings, and over time the pipeline route shifted to avoid some of their properties. “This is a wealthy neighborhood, we have more influence than others, but we’ve seen outrageous abuse of individual and property rights, it’s so un-American,” Seriff said.

Less than half a mile up a wooded fire access road, piles of the 43-inch carbon steel pipeline are visible up and down the mountainside, rusting on the deforested corridor since construction was suspended a couple of years back.

Seriff said: “The bottom line is that we don’t need more methane infrastructure. We need to move forward not back. This deal is an outrage but it’s not over. We’re organized and ready, and we’re going to stop this.”