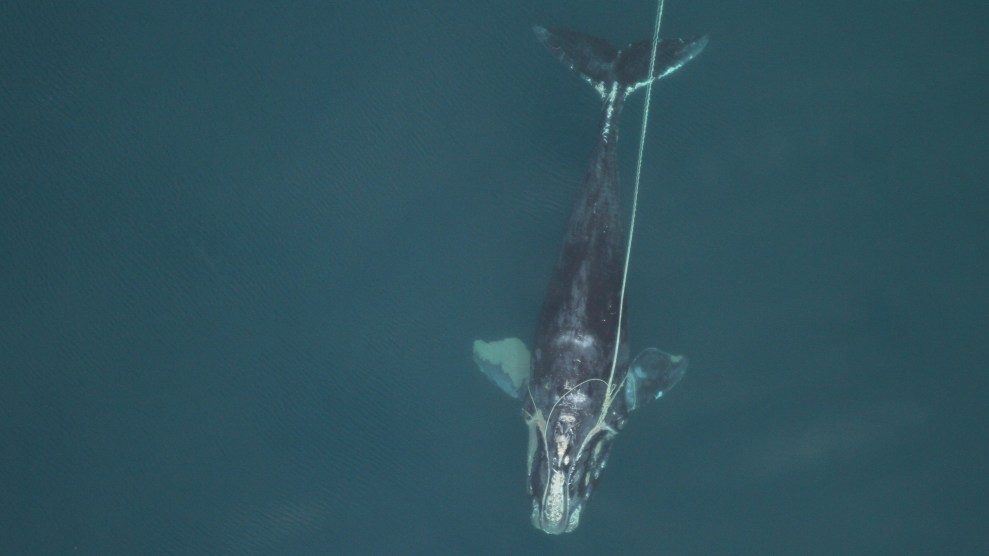 This female North Atlantic Right Whale got entangled in fishing lines off the coast of Georgia. Within two months of this photo being taken, she was dead. Associated Press

Lobster nets and pots have become such a threat to the survival of critically endangered North Atlantic right whales that the crustaceans have been “red-listed” as seafood to avoid by a major fish sustainability guide.

Fewer than 340 of these whales exist today, including only 80 breeding females. The population is estimated to have dwindled by 28 percent over the past decade.

Seafood Watch, a sustainability guide for consumers and businesses issued by Monterey Bay Aquarium in California, has downgraded Atlantic lobster caught by pot and gillnet fisheries in the whales’ range to “avoid,” its lowest rating.

The new assessment reflects the lack of “timely, effective management” to mitigate “significant risks” of entanglement and promote recovery of the species. The US lobster fishery is worth about $500 million a year.

“Every vertical fishing line and gillnet is a threat to the remaining whales, which face the risk of entanglement every day.”

Entanglement in the fishing gear used to catch lobster, crab and other species is one of the two leading threats to right whales (the other being ship strikes). The whales’ migration route—from their calving grounds in Florida to feed in Canada—is littered with more than 1 million vertical lines from pots and traps, with 622,000 of these in US waters.

In June, a court ruled that a US federal agency, the National Oceanic and Atmospheric Administration (NOAA), violated both the Endangered Species Act and the Marine Mammal Protection Act by failing to quickly reduce impacts of lobster fishing gear on the North Atlantic right whale.

Other fisheries added to the “red list” include all fishing for Jonah crab, and other trap, pot, and gillnet fisheries. Gillnets are a wall of netting that hangs vertically in the water, while traps and pots also have vertical lines from the surface.

Oceana, a conservation pressure group, urged the US and Canadian governments to implement stronger measures to protect North Atlantic right whales. “It’s unfortunate that the government’s failure to update the safeguards to protect North Atlantic right whales is having such serious consequences on these [lobster] fisheries,” said Gib Brogan, Oceana’s campaign director.

Brogan said for the whale population to recover, the average number killed or injured by human activities must be fewer than one a year. “Every vertical fishing line and gillnet is a threat to the remaining whales, which face the risk of entanglement every day,” he said.

Strong fishing regulations were needed to avoid interactions and minimize the effects of interactions, he said. To give the species a fighting chance, the National Marine Fisheries Service (also known as NOAA Fisheries) should reduce the number of vertical lines and gillnets in the water and move to whale-safe fishing equipment, such as ropeless gear, Brogan said. “Ordering lobster or crab should not mean jeopardizing the future of critically endangered North Atlantic right whales.”

Last year, the Marine Stewardship Council was criticized by conservationists for certifying as “sustainable” fisheries within the right whales’ migration route. A NOAA spokesperson said: “The US wild-caught American lobster fishery is sustainably managed and responsibly harvested under state and federal regulations. In addition, NOAA Fisheries is taking an integrated ‘Road to Recovery’ approach to protect, conserve and restore the endangered North Atlantic right whale species.”

In September 2021, NOAA Fisheries issued a regulation to reduce entanglement in the north-east lobster and Jonah crab fishery, that went into effect in May 2022. In July, it announced proposed changes to further protect right whales, including changes to vessel speed and guidance on the use of ropeless fishing gear.

In a statement, Fisheries and Oceans Canada said the Canadian government “continues to take strong action to protect endangered North Atlantic right whales and to help their population rebuild.”

Measures include closing fishing areas when whales were present, working with harvesters on whale-safe gear, such as lower breaking-strength rope. “So far this season, for the third year in a row, there were no reported deaths of North Atlantic right whales in Canadian waters,” it said.