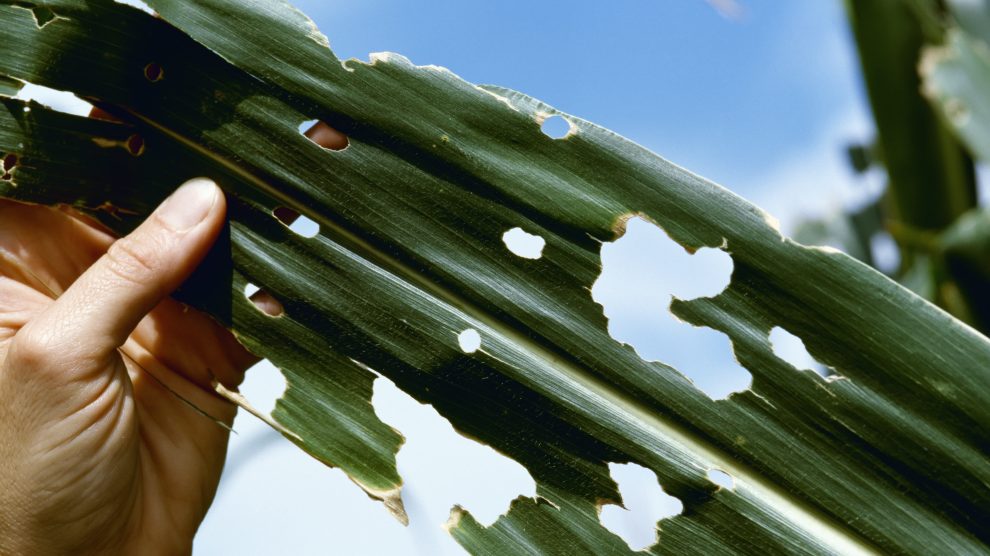 Agricultural pests that devour key food crops are advancing northwards in the US and becoming more widespread as the climate hots up, new research warns.

The corn earworm (Helicoverpa zea) is considered to be among the most common farm pests in the US, ravaging crops such as maize, cotton, soya and other vegetables. It spends winter underground and is not known to survive in states beyond a latitude of 40 degrees north (which runs from northern California through the midwest to New Jersey), but that is changing as soils warm and it spreads to new areas, according to research led by North Carolina State University.

The report follows research from the University of Washington in 2018 that found 2C (3.6F) of warming would boost the number and appetite of insects globally, causing them to destroy 50% more wheat and 30 percent more maize than they do now. Rising heat stress is already affecting yields, with harvests of staple crops in Europe down this year as a result of heatwaves and drought.

“Organic growers have a major challenge controlling this pest and often accept significant crop losses when infestations are high.”

Pest invasions have serious implications for food security. “As the climate changes, the overwintering zones are likely to shift northward,” said the co-author Anders Huseth, an entomologist at North Carolina State University. “This is the canary in the coalmine for agricultural pests.

“Making sense of what’s taking place with [the corn earworm] is really important for agricultural producers.” Other pests that could spread northwards in the US in a similar way include fall armyworm, green cloverworm, soybean looper, and velvetbean caterpillar.

Researchers already knew that warmer winter soils meant insects that live in the soil are more likely to survive. Using four decades of soil temperatures and data monitoring corn earworm, researchers predicted the distribution of pests in the future.

The southern range has grown by 3 percent since 1981 and is predicted to double in size by the end of the century, as the other zones get smaller, according to the paper, published in Proceedings of the National Academy of Sciences. Corn earworm moths are able to disperse up to 600 miles using seasonal winds, meaning they can spread fast if conditions are good.

Over the coming decades the model illustrates that this insect could expand its overwintering range into the US maize belt in Ohio, Indiana, Illinois, Missouri and Iowa. In Minnesota, for example, no corn earworms have successfully survived its harsh winters, but the models suggest the whole state will be in the transitional zone by the end of the century.

This could result in increased use of pesticides and lower yields. “If intensive maize production does not also shift north with changing climate, we expect that corn earworm will become a more frequent and important problem in these states,” said Dr Douglas Lawton, a former North Carolina State University postdoctoral researcher and co-author of the paper.

“Organic growers have a major challenge controlling this pest and often accept significant crop losses when infestations are high,” he said.

Monitoring soil temperatures could help predict the spread of pests, helping farmers control them more effectively, the report suggests. Huseth said: “We’d like to come up with a better forecasting tool for this pest, along with a risk-prediction model, in order to give growers better information about pest spread. Success here could reduce both costs for farmers and pesticide into the environment.”